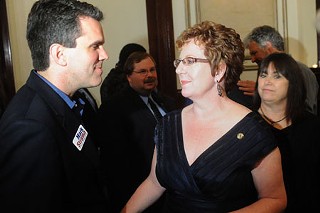 Austin state Reps. Mark Strama and Valinda Bolton discuss the Democratic election toll. Strama retained his District 50 seat, but Bolton, one of a number of other Democratic representatives in this position, was forced out of her District 47 post. (Photo by John Anderson)

• As predicted, Gov. Rick Perry swept to a third term in office Tuesday, setting off rumors about a potential presidential run in 2012. Travis County Democrats were caught in the flood of Republicans casting ballots, with Austin state Rep. Valinda Bolton becoming one of 22 House Dems who lost seats; she'll be replaced by Republican Paul Workman.

• Three construction workers who did plaster work on the Gables Park Plaza and 21 Rio luxury condo projects have filed a federal class action lawsuit against Dallas contractor GMi (Greater Metroplex Interiors), charging the company with shorting straight pay and overtime, at an estimated total of $120,000. In a press release, the workers say they and others regularly worked 60-70 hours a week for a GMi subcontractor but were not paid accurately, and that lengthy efforts at negotiation have since failed to provide a resolution (see "The View From 21 Rio," Dec. 25, 2009).

• What's a Halloween without some blood? Austin Police Department announced that a couple dozen blood-draw search warrants were issued as part of their "No-Refusal" weekend.

• Austin may have lost the Austin Aztex soccer club to Orlando, Fla., but the Texas Rollergirls have signed a new deal with the city to play in the Austin Convention Center. After eight years at Playland Skate Center, the local flat-track Roller Derby league will move Downtown in 2011.

"We are tired of being told how much salt we can put on our food."

– Gov. Rick Perry, listing his dislikes in his soon-to-be-released book, Fed Up!: Our Fight To Save America From Washington