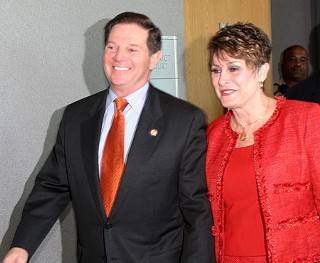 Tom DeLay and his wife, Christine, in a 2005 appearance at the Travis County Courthouse (Photo by Jana Birchum)

The trial of Republican former U.S. House Majority leader and Sugar Land Rep. Tom DeLay kicked off Nov. 1, with prosecutors arguing that DeLay sought illegally to "enhance his power" in Washington, D.C., through a middecade redistricting process, a plan he allegedly put in motion by laundering $190,000 in corporate campaign donations ("soft money") to his brainchild, the Texans for a Republican Majority PAC, through the Republican National State Elections Committee. The funds were then sent back as "hard money" (from individual contributions) to seven Texan GOP state rep hopefuls in races across the state. Electing those seven Republicans – including two Travis County lawmakers, Todd Baxter and Jack Stick (a former Travis County prosecutor) – would help turn the Texas House over to the GOP and thus get redistricting back on the table, even though the maps had just been reworked in the wake of the 2000 census. "He did it," Assistant Dis­trict Attorney Beverly Mathews told the six-woman, six-man jury. "Tom DeLay did it to increase his power." (DeLay is charged with one count of money laundering and one count of conspiracy to launder money.)

For more than 100 years, Texas law has included a prohibition of corporate donations for individual candidates. Laun­der­ing corporate "soft" money into hard funds – those given by individual donors – was TRMPAC's way of evading that prohibition, Mathews argued. "It was a money swap ... pure and simple," she told the jury during opening arguments, "supervised and facilitated by Tom DeLay."

Not so, argued DeLay attorney Dick DeGuerin. No corporate money went to any Texas candidates, he insisted. The corporate money TRMPAC received was indeed "swapped" in D.C., but that's not an unusual way of doing things, he argued. Moreover, he said, although TRMPAC was an offshoot of DeLay's D.C. PAC, Americans for a Repub­lic­an Majority, DeLay had nothing to do with the operations of TRMPAC. In short, DeGuerin argued, this case is not about illegal campaign donations but about politics: "Good politics, successful politics," he argued. "You cannot convict Tom DeLay, and the judge [Senior District Judge Pat Priest of San Antonio] won't let you, because of his politics." (For more on TRMPAC and the DeLay case see, "TRMPAC Forever," May 7.) The trial is scheduled to last three weeks.