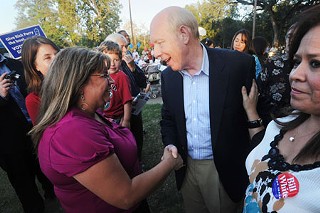 A late push Tuesday to get out the Democratic vote drew top-of-the-ticket candidates, like gubernatorial hopeful Bill White, to Parque Zaragosa Recreation Center in East Austin to schmooze with voters in advance of the Nov. 2 election. Early voting ends Friday. See election coverage at austinchronicle.com/elections. (Photo by Jana Birchum)

• City Council convenes today, Thursday, Oct. 28, to a 75-item agenda without much controversy. However, Water Treatment Plant No. 4-related road improvements and changes to women- and minority-owned business contracting may be the exceptions to the rule. See "Running the Numbers," and "City Hall Hustle."

• In the wake of his reinstatement, Austin Police Officer Leonardo Quintana on Wednesday was again fired by Chief Art Acevedo, this time in connection with a domestic disturbance case. For more, see "Quintana Reinstated ... and Reterminated."

• Capital Metro has announced a pilot plan to close four stops on Congress Avenue, starting Nov. 6. The transit agency hopes closing the northbound stops at Sixth and Seventh streets and the southbound at Seventh and Eighth will reduce the number of accidents.

• Against the homeowner's wishes, the Historic Landmark Commission on Monday recommended historic zoning status for the Bradford-Nohra house, a deteriorating Hyde Park manse on Avenue G. The neighborhood association has challenged owner Helen Nohra's plans to demolish and replace the structure, a battle that has led to mediation, court, and this recent do-over vote by the HLC; City Council may have the final say.

• On Oct. 22, the Texas Supreme Court rejected an appeal by Hyde Park Baptist Church in the 2007 lawsuit charging child abuse at its day care center. A jury found the church negligent in supervising a teacher who had "physically, verbally, and emotionally" abused a young child in her care, and the 3rd Court of Appeals had affirmed the verdict in 2009. See "When the Bough Breaks," Nov. 17, 2006.

• Austin Energy announced this week the availability of zero-interest loans and rebates that can be used on top of federal tax credits and Texas Gas Service rebates to fund home energy-efficiency improvements. The offer extends through the end of the year.

• The Solid Waste Advisory Commission last week recommended introducing citywide recycling by 2014. Currently, small multifamily complexes aren't required to provide recycl­ing; under the proposal, recycling at all residential units and offices would be phased in starting in 2012. Phase 2, offering recycling and possibly composting to the food service industry, is still under discussion. City Council is expected to vote on the issue Nov. 4.

• A Travis County jury Wednesday found South Texas Rep. Kino Flores guilty of tampering with government records and perjury in connection with charges that he cut legislative deals in exchange for money. The Democratic lawmaker will be sentenced at a later date and could face up to two years in prison.

"I don't have a racial bone in my body. Neither does Tom DeLay."

– Statesman quoting attorney Dick DeGuerin, after striking five African-Americans from a Travis County jury that will decide whether DeLay is guilty of money laundering