With minor opposition, Eckhardt is setting priorities for next term

What a difference an election cycle makes. Four years ago, a wave of anti-toll-road sentiment helped fuel Sarah Eckhardt's drive to unseat three-term incumbent Karen Sonleit­ner in a bruising primary battle, after which Eckhardt went on to claim the Precinct 2 seat on the Travis County Commissioners Court.

Today, toll roads are not currently the object of campaign slugfests, and Eckhardt – who ultimately ended up compromising on the divisive issue (to the dismay of some of her most ardent supporters) – is poised to win a second term in a walk.

After four years of taking both popular ("no" on landfill expansions) and unpopular ("yes" on a flood plain permit for an aggregate mining company) positions on hot-button issues, Eckhardt remains one of Austin's most respected elected officials, especially among the progressive voting bloc in Precinct 2, which covers much of West and North Central Austin. Eckhardt has also worked hard to maintain support in the more conservative northern fringes, which include Pflugerville.

Despite her willingness to broker a deal on toll roads – on a Capital Area Metropolitan Planning Organization proposal that would have sailed through with or without her vote – Eckhardt cites her CAMPO toll road "covenants" in her list of accomplishments in her first term. The amendments, she says, were an attempt to make the best of a bad situation by locking in a number of promises – including a prohibition against foreign ownership of the roads and a requirement that toll revenues stay invested within two miles of the road that generated the money.

Roads remain a key concern of voters, but on that front Eckhardt sees a silver lining. This time, she says, folks are much more sensitive to how future and existing roads relate to ongoing regional planning efforts. "I think that people are starting to see a connection between transportation and land use ... and on how our land is used or misused," she said.

Unlike the 2006 election, Eckhardt faces a Republican opponent on this year's ballot. If the name David Buttross carries a familiar ring, it's due to what little name ID he managed to garner in his unsuccessful 2009 campaign for Austin mayor. The real estate investor and small-government advocate placed fourth in a five-way race. (Libertarian Matthew Finkel is also on the ballot.)

Buttross, an engaging fellow with business credentials, admits that he has his work cut out for him in trying to wrest the Precinct 2 seat from a popular incumbent. "Nobody hates her," he acknowledges somewhat grudgingly. He's running on a campaign platform that promotes economic growth, reduced property taxes, and eliminating taxpayer-funded abortions through the city/county health care district, Central Health. What Buttross lacks in campaign substance he makes up for in signage. His prominently placed campaign signs pretty much saturate the entire precinct. He boasts that he's not actively soliciting campaign contributions because, in his view, "If somebody writes you a check, you owe them something."

Despite the distractions of what amounts to minor opposition, Eckhardt is more concerned about setting her priorities for the next term. Topping her to-do list is the prickly issue of property taxes. That is, the discrepancy factor that forces middle-to-lower income residents to carry the greater burden of property taxes. This past summer, Eckhardt spearheaded the creation of a team of professionals to look for equitable solutions to a lopsided tax system created at the state level. She credits local activist and frequent City Hall critic Brian Rodgers, a real estate investor, for producing a report last year that documented his claim that commercial property owners are paying less than the market value of their holdings.

The newly appointed 10-member working group includes in-house county number crunchers, as well as Rodgers and respected tax-and-budget pros like Billy Hamilton, a former chief deputy of the Texas comptrol­ler's office, and Dick Lavine, a fiscal analyst with the Center for Public Policy Priorities. "These are total tax junkies," Eckhardt says of the team. She expects the group to present a set of recommendations to the commissioners in early 2011. "They're going to take a look at the tax code as it applies to the county, looking for any opportunities to enact progressivity that we haven't already taken," she said. "Then, they'll look at legislative fixes we might pursue."

Of course, legislative fixes are hard to come by for counties, especially in matters of land use (over which counties have little control, under state law) and rapidly shrinking state dollars to help fund local criminal justice and social services programs. Eckhardt expects more of the same legislative stinginess next year, which will force the county to continue absorbing more costs.

As an example, the commissioner points to the state's failed Texas Youth Commis­sion as the reason the county has drastically reduced the number of juvenile offenders it sends to TYC facilities. Fewer than 20 Travis juveniles have been sent to TYC in the last three years, she says. It's not because there are fewer kids getting into trouble. "TYC hasn't improved enough to convince us our kids won't be more damaged when they get out than when they went in," Eckhardt says. Absorbing these kids into the local system saves the state several million dollars each year, but can the county expect any financial assistance from the state to help carry the load? Probably not, she says.

In a similar vein, Eckhardt says she is concerned about fewer state dollars to help fund Travis County's successful jail diversion programs that favor treatment of drug and alcohol abusers. The programs "work in terms of reducing crime, and they cost less because you're not reincarcerating the same guy over again," she says. Her message to the Lege: "Don't leave us in the lurch."

Quote of the Week: Sarah Eckhardt
The optics of local governance 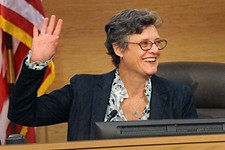 County Judge Sarah Eckhardt on Greg Abbott's Texas Hammer
"Local control had been a darling of the state for years, and now it has become the enemy"