Cap Metro changes could leave disabled customers without a ride 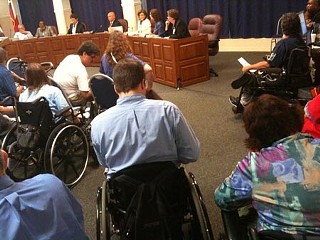 Disability activists voice their dismay during a Cap Metro board meeting in response to the cash-strapped agency's move to alter its paratransit services. (Photo by Lee Nichols)

Capital Metro's fiscal year 2011 budget covers a lot of ground, including financial reserves, employee raises, and increases in fares and rail service. But one issue dominated discussion at last Friday's board of directors meeting: changes to MetroAccess, the transit agency's paratransit service.

Ostensibly, the decisions about paratransit were separate agenda items from the $213 million budget vote, but the budget assumptions were based in part on restructuring MetroAccess, among other things. Cap Metro has argued that the cuts are necessary to make ends meet in tough budgetary times, as well as to implement recommendations from a scathing report by the state Sunset Advisory Commission in the spring. Cap Metro says paratransit takes up 17% of the budget to serve 2% of customers, and costs are becoming unsustainable.

The changes – arrived at after a series of rather testy public input meetings – include more strictly enforcing a policy that paratransit service (vans and other vehicles that transport passengers with disabilities who are unable to use regular fixed-route service) will only be available to customers living within three-quarters of a mile of a bus or rail line; requiring an in-person interview and orientation with MetroAc­cess staff to determine eligibility; reducing call center hours for making reservations; open-ended service for medical trips, jury duty, and travel return; and reducing the number of subsidized taxi vouchers available to customers with disabilities.

The three-quarters-of-a-mile policy – the minimum required by the Americans With Disabilities Act – has already been in place since 2005, but about 400 MetroAccess customers had been grandfathered from that cut. Those customers will now lose service unless they move closer to a route.

In a presentation to the board, Cap Metro staff said it will work with those customers "on an individual basis to help meet their transportation needs for the first 90 days," and possibly for up to 12 months, to ease the transition. That wasn't enough to soothe disability activists, some of whom are still angry over the original reduction in service area five years ago, which covered more of the Cap Metro taxing district.

"These things cause family issues when you kick people off – and I don't want to use any other word – of their transit system when that's all the choice they have," Diane Bomar-Aleman, chair of Cap Metro's Access Advis­ory Committee, told the board. "This does affect families and relationships; it doesn't just affect their transportation issues."

Citizens with disabilities were also upset by the notion of Cap Metro staff making the determination of paratransit eligibility. "I implore you, please do not take [the determination] out of the hands of the licensed medical professional," said Urban Trans­port­a­tion Commission member Boone Blocker, who uses a wheelchair. "It is completely unnecessary. It adds a whole level of bureaucracy where you don't need to."

However, board member John Langmore countered, "It seems to me ... that it's responsible on the part of the agency to sit down once with someone who's going to be eligible for a significant Capital Metro service. It just seems like a basic level of responsibility to have some encounter with a person who's applying for this program."

The board did find a little time for other decisions on Friday:

• approval to move forward with possible fare increases, including charging the people with disabilities and the elderly for the first time, but any fare increases must first go through a public process;

• decision to set aside $250,000 to explore creating a nonprofit organization committed to helping the needy meet their transportation needs;

• and restructuring of some routes and schedules effective in mid-January 2011, including the addition of midday service to the MetroRail Red Line, which has had disappointing ridership well below projections made before it launched in March. The commuter rail's rush-hour service would also be tweaked. A proposal to add Friday evening service was basically shelved. Instead, four such runs would occur during FY 2011 as a trial for further consideration.