After a year of public outreach, the city's comprehensive planning effort has now entered the third round of community forums – the most crucial round, according to architect and task force member Greg Esparza, because it's the last chance for public input before the first Imagine Austin draft is written. That input, if all goes as planned, will have far-reaching consequences, says Esparza, who serves on the 34-member citizens advisory task force. Put simply, the comprehensive plan will determine how Austin absorbs an estimated 750,000 new residents and 300,000 new jobs over the next three decades – hopefully without losing its soul in the process.

The public's role in the comp plan is, by and large, about defining that nebulous concept of Austin's "soul" – a difficult thing to remember when you're actually attending a public forum, vying with the name-tagged masses for face time with a series of poster boards. Public input gathered thus far has been used to develop four different visions of Austin's future – dubbed scenarios A, B, C, and D – each with its own unique pattern of land use and transportation. A fifth "Trend Scenario" has also been generated, to predict a future in the absence of a new master plan. The scenarios come complete with maps and estimates about traffic, environmental impact, and more, and while most of it is available online, only at the forums can you get the full late-night-Kinko's feel of it all, with slide shows, premium color printouts, a map of Austin as big as your dining room table, and Post-its on which you can write your thoughts in loopy cursive. The scenarios certainly provide plenty to write about, detailing just about everything but the color of underwear you'll be wearing 30 years from now – but those details can be misleading.

Forum participants are encouraged to treat the scenarios like a buffet, choosing favorite "indicators" from each one. "We're very much expecting to pull the strongest aspects of each scenario into a final preferred growth scenario, and we're structuring the surveys and open houses to reflect that," says Gregory Claxton, a planner with the city of Austin. You could choose, for instance, the 88 square miles of development found in Scenario D (the most compact plan) with the 278,500 daily bus/rail trips predicted for Scenario C (the plan with the heaviest reliance on public transit) with Scenario A's 45% urban-core development and infill (the lowest percentage of all the options). But doing so has to make you wonder: Just how meaningful are these figures if they can be pulled out of context and pieced haphazardly back together in any combination? If you simply pile on all your favorite ingredients, won't you end up with something like a frozen yogurt sundae gone horribly awry somewhere between the gummy bears and the cookie dough?

"When you use numbers, sometimes they look more precise than they're meant to be," says Garner Stoll, assistant director of the city's Neighborhood Planning and Zoning Depart­ment. In fact, he says, this process is "a lot more art than science," with the indicators – based on "what we know about the characteristics of cities right now" – serving as "guideposts" toward particular factors. "Austin hasn't done a long-range plan in so long that we are getting a little bit obsessed with precision rather than ... policy choices," he says. "Of course we want to do it as thoughtfully as possible, and that's what the whole 'scenario indicator' is about – having tools that allow people to think quantitatively about the future. But there's certainly no precision about it." In other words, at this buffet, you can go ahead and custom-order a combo platter – just don't expect it to look quite like the pictures on the menu.

With the planning process still very much in the "30,000-foot-view" phase, as city planner Matthew Dugan puts it, the public's role is a lot simpler than all the tables, surveys, and maps might imply. "At this point, it's appropriate to be thinking ideal future," says John Fernsler of the city's consulting firm Wallace Roberts & Todd. "It's up to us to tether it to reality when we begin the actual drafting of the plan and the implementation."

While "a lot of people feel critical of the city," says Esparza, "they don't always feel like they have enough knowledge" to provide insight on something as, well, comprehensive as the comprehensive plan. In fact, even if you happen to be an expert in city planning and the delicate political history of such efforts in Austin, and even if you have intimate knowledge of the conflicting interests of every resident, business owner, and salamander living all the way on through the extraterritorial jurisdiction, the task of piecing all those interests together into one harmonious whole is well over any one person's head. So despite the wide-reaching implications of the task at hand, says Esparza, your main job is to provide expertise not so much about Austin but about yourself. The goal of the public input process is to "get people to think about what they do every day," he says, and to illustrate "how broad city changes affect everyday life."

The Imagine Austin planning area extends beyond city limits (the area in beige) through the extraterritorial jurisdiction (green).

To that end, Esparza is working with the What Is Austin? campaign – started by a coalition of local groups, including Liveable City, to promote public involvement in the plan – to host this weekend's Austin Futures Fair. He hopes the three-day "public idea gallery" will inspire people to share their thoughts, with local artists, designers, and performers serving as creative muses. While 10,000 people have participated in some way during the last year, many more remain underrepresented, most notably Hispanics, renters, households making less than $50,000 a year, and East Austinites – especially those who live farther out, in the city's extraterritorial jurisdiction. Ripe for development, that area will be of particular importance in coming years, as urban expansion reaches into the delicate ecosystem of the Blackland Prairie and butts up against agricultural land.

Also important, of course, is the central city, where residents have long labored over neighborhood plans attempting to fill the void created by a weak and much-neglected Austin Tomorrow Comprehensive Plan, the city's current comp plan. Despite city staffers' attempts at reassurance, the Austin Neighborhoods Council remains skeptical that those plans – many of which hope to stave off the kind of infill and redevelopment that might be necessary to save open space elsewhere – will ultimately find a home in the comp plan.

Two weeks ago at City Hall, on the night of the first public forum in this series, one participant lamented not the tensions presented by the various scenarios but the lack thereof, and not the abundance of options laid out before him but the dearth. "There's a wealth of information here," he said. "This is impressive; at the same time, it doesn't provide us a lot of choice." As a planning student in the University of Texas' School of Architecture, he said, he's learned about cities all over the world taking much more innovative approaches to mixed-use development, density, and sustainability. Austin's approach, he said, is "not at all radical – it is incredibly safe." Of course, the scenarios only reflect Austin's values insomuch as they reflect the fraction of participants who have taken part in the process so far. That can still change. The comp plan process may be reaching a turning point, but it is far from over. For those just entering the fray, the Futures Fair may be just the beginning.

Can't make it to any of the forums? Take the online survey at www.cityofaustin.org/compplan.

The artwork above by designer Meegan Beddoe, which is on display at the Austin Futures Fair, imagines that MoPac has been taken over by bicyclists (and a few Muppets). Beddoe submitted the image as part of 1x100, a public gallery for ideas about the future of Austin. To take part, simply submit one image illustrating your idea, accompanied by 100 words describing it, to austinfuturesfair@gmail.com (include your name and ZIP code). You can check out everyone else's ideas, along with inspirational works by local artists and designers, when you go to the fair. Throughout the event, there will be comp plan experts around to answer any questions you may have as you ponder the city's five future scenarios and fill out your survey. A party Friday night (8pm) features a performance – straight from "Austin's future," we're told – by the New Movement Theater, music from Mother Falcon and the Minor Mishap Band, and food and drinks. Austin Futures Fair: Thursday, noon-8pm; Friday, noon-12mid; Saturday, 10am-5pm; Monday-Wednesday happy hours, 6-8pm. 201 W. Second (one block west of City Hall). Admission: free. www.austinfuturesfair.com. 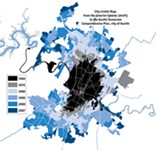