Are pedicab regulations out of touch? 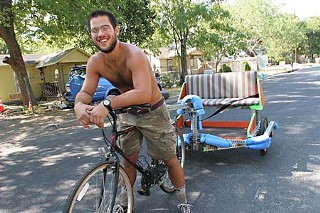 Dirtnail Pedicabs owner Luke Iseman says he and other members of his fleet have been targeted by police. (Photo by Jana Birchum)

The traditionally laid-back realm of pedicabs – in which drivers provide bike-powered rides to Downtown revelers in return for tips – has been harshed in recent weeks by allegations of a police crackdown against the peddlers. It seems as if some of the unwanted attention may result from an unclear understanding of rules governing the vehicles, compounded by drivers' bristling at the regulations – but separate efforts to further codify pedicab operations may further throw the field into disarray. The conflict is a sign of the growing pains the once innocuous industry now faces as it expands; according to the city's Transportation Department, Austin now counts some 16 separate pedicab companies, encompassing 187 vehicles.

Dirtnail Pedicabs owner/operator Luke Iseman says that in the last month, he and other members of his 18-cab fleet have been targeted for stepped-up enforcement by the police, as have drivers from other pedicab companies. He recounts how earlier this month he was cited for parking on the sidewalk at Sixth and Brazos because it didn't fall within the pickup or drop-off points designated in Dirtnail's "operating authority." He says another of his drivers, at Fourth Street and Colorado, "was told by one officer to get off the street and onto the sidewalk. Five minutes later, another officer tells him to get off the sidewalk and onto the street." He also recounts, among other incidents, being pulled over by a police cruiser "and told that my rear slow-moving vehicle sign was 'not reflective enough.'"

While the enforcement may be new, the police may have been within their authority, at least regarding where pedicabs can queue. Pedicabs are governed by each company's operating authority, issued by the city, outlining the areas in which cabs can operate and pick up fares. But Iseman says designated pickup spots "represent very little of the actual rides that we take" and that the practice of designating specific areas is hopelessly out of step with cab patrons' changing patterns of behavior. "You're never going to define waiting spots unless you just say 'every corner as long as you're not in the way of traffic or pedestrians.' ... You can never define those fast enough to keep up with change, not only in what clubs are open, but what clubs book popular artists that specific night."

"I have not informed the officers to go out and write tickets," says Austin Police Department Cmdr. Marcelino Gonzales. However, the relationship between police and pedicabs has changed, Gonzales says: An "informal agreement, several years ago when pedicabs were starting up," allowed more leeway in letting pedicabs behind police barriers on Sixth Street when it's closed to traffic and for waiting at corners that are outside a cab's agreement (both of which Iseman was doing when he was ticketed). "All of this was fine and dandy until we saw an abundance, an increase in pedicabs," Gonzales says. A meeting between the police and pedicabs, to describe the state of enforcement, was scheduled for Sept. 7 but was canceled; Gonzales says the police canceled the meeting after consulting with the city legal department on the informal agreement, adding, "We have to actually have some true guidelines."

It does seem that the rules regulating pedicabs are somewhat confusing. In contrast to taxis, which have their own operating rules spelled out in the City Charter, pedicabs and the issuance of operating authorities are governed by a subsection on "Non-Motorized Services" that spends more time addressing horse-drawn carriages than anything specific to pedicabs. Iseman says he tries to govern his fleet by consulting Texas transportation code, city of Austin code, and his company's operating authority.

While an attempt to further finesse pedicab rules may seem overdue, early reaction to regulations considered by the Transpor­ta­tion Department were resoundingly negative. The department's endorsement of a San Diego practice requiring rates of $2 per block generated a backlash among fleet operators. This week, the Transportation Department recommended to the Urban Transportation Commission "that we need to add to the city code some specific language about pedicabs, and we would work with the pedicab community on what that looks like," says Transportation Assistant Director Gordon Derr. That language looks to address issues related to waiting spots, traffic laws, and more. As for fares, if a tips-only policy is "the general consensus at this point, that's fine," says Derr. "It's just an issue to explore."

The Transportation Department comes before City Council Sept. 30, but bikes are taking a backseat to taxicabs; the department will largely be presenting results from its taxi working group. In the run-up to renewing the city's three taxi franchises earlier this year, the department, in tandem with City Manager Marc Ott, was charged with looking at the cab industry and "other issues regarding taxicabs as necessary," including pedicabs. "One of the issues from taxicabs was they thought pedicabs didn't have to have insurance," says Derr. "The taxi drivers weren't really aware of what rules pedicabs had to operate under." (Not to mention possibly resentful of the now omnipresent, tips-only competition for fares Downtown, a potential reason for their inclusion in the taxi working group, Iseman feels.)

At the September presentation, council may issue further direction for pedicab regulation.