How will Texas schools fare without federal education money? 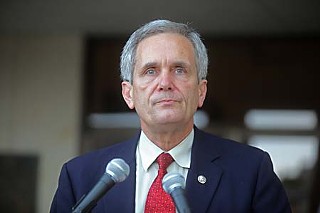 Congressman Lloyd Doggett (above) and Gov. Rick Perry are in a war of words over public education funding. (Photo by Jana Birchum)

Sometimes it feels like only a constitutional scholar could unravel the current fight between the U.S. Department of Education and Gov. Rick Perry over emergency public school funding. In reality, it's just another example of Texas school districts being left in a financial hole.

On Sept. 3, Texas submitted an application for its $830 million share of the $26 billion in job support cash allocated by Congress under House Resolution 1586; $10 billion of that was set aside for education spending, intended to prevent an estimated 160,000 teacher layoffs nationwide and alleviate the pressures of low teacher salaries. If Texas' application had been approved, the Austin Independent School District stood to gain $17.5 million.

But on Sept. 8, the Department of Educa­tion announced that it was rejecting Texas' application because of what amounted to a poison pill inserted in the application by Texas Education Com­missioner Robert Scott on Perry's behalf that was designed to flout an amendment in the enabling legislation authored by Travis County Congressman Lloyd Doggett. The amendment, which obliged Texas to maintain education spending for three years (rather than one year, as is the case for other states), was a response to Perry's use of American Recovery and Reinvestment Act money in 2009 to shore up the state budget. Back then, Doggett's office calculated that AISD was supposed to receive $78 million in stimulus money; instead, due to Perry's diversion, the district only got $12 million, and the rest went into state coffers. This time around, according to Texas Education Agency spokeswoman Debbie Graves Rat­cliffe, the application rules clash with clauses in the Texas Constitution barring long-term spending commitments. Therefore, said Ratcliffe, "We can't make those assurances until the Legislature meets and adopts a budget." Without a commitment, the application is invalid. 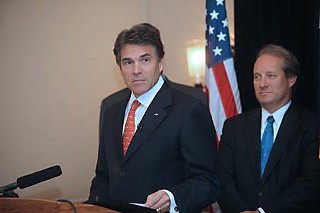 In total, 30 states and four U.S. protectorates had their funding applications approved by the Department of Education by Sept. 13. That means California, Ohio, and even the Commonwealth of the Northern Mari­ana Islands get the cash – but not Texas.

AISD hadn't been counting on the money, but the board of trustees had outlined plans for its spending. When they decided not to risk a tax rollback election on this Novem­ber's ballot, they discussed instead using this latest federal cash injection to cover a one-time 2% pay boost. Now, said AISD board President Mark Williams, "There's not a pay raise coming without the EduJobs money for this school year."

It is the political fingerpointing between Doggett and Perry – not the wage crisis – that has been grabbing headlines. In a press release, Perry savaged what he called "Congress' anti-Texas provisions." In turn, Doggett accused Perry of acting in "bad faith" by rewriting the application and noted that Perry exhibited no such "hand-wringing" in the "July 1, 2009 request for federal education support," which included similar commitments to those required this time around.

The money isn't completely off the table, however. Ratcliffe said the state and the feds are discussing the possibility of ring-fencing the cash until the Legislature passes its next budget. However, the state wouldn't reapply until 2011, and the cash would not become available until fiscal year 2012 at the earliest. AISD "could certainly use the money," Williams said, "and at this point we're just left to the negotiations between Washington and Austin."

However, not all districts can just sit and wait. For example, Waco ISD was in line for $4.6 million and had already committed to use it for pay and benefit improvements. With the application failing, Superintendent Sheryl Davis told the Waco Tribune-Herald that she was going to have to cut line items to cover those commitments. "All across Texas, districts are laying off teachers," said Education Austin Co-President Rae Nwosu, "and in the long run, it's going to affect the students."

There will be some small respite for some AISD employees this year. In 2009, the Legislature mandated a one-time statewide salary bump for teachers, nurses, speech pathologists, counselors, and librarians. The increase, though worth less than 1% of their salaries, could mean as much as $50 a month before taxes for some. However, there is no cash for the lowest paid district workers, like bus drivers and custodians, and even eligible staffers could see little to no effect if they hit their salary ceilings. That's a particular problem for Austin: The state comptroller has acknowledged that low pay is one of the main reasons teachers quit the classroom, and AISD has traditionally suffered from losing experienced staff to surrounding high-paying school districts like Eanes and Round Rock. The historic classroom turnover rate of roughly 15% dropped to around 9% last year – in part because of the recession – but Nwosu warned that AISD is built on a time bomb of uncompetitive salaries. "We're feeling right now that the district is sitting and waiting," she said, "instead of actually doing something."