SBOE contests around the state

Tweet
print
write a letter
At least a minimal level of change on the State Board of Education was guaranteed last December, when District 10 board member Cynthia Dunbar announced she would not run for re-election. But the SBOE's conflicts have been about ideology, not individual candidates – the concern for moderates and progressives around Texas is whether seats can be taken back from the fundamentalist bloc that holds seven of the 15 slots on the board. In that battle, the anti-fundamentalist fight could be seen as having taken two steps forward and one step back – and one of those forward steps is uncertain.

District 9: The forward step that appears to be a lock is in District 9 (Central East Texas–College Station up to Red River). In the Republic­an primary, moderate Thomas Ratliff used both his well-known name – his father is popular former Lt. Gov. Bill Ratliff – and the antics of the incumbent to take down former SBOE Chair Don McLeroy. McLeroy, a Bryan dentist who believes the Earth is only 6,000 years old, became the poster boy for creationist dogma and lost his chairmanship when more than a third of the state senators refused to confirm his renomination by Gov. Rick Perry. Ratliff's race against McLeroy was hard-fought, but enough Repub­licans were sufficiently embarrassed by McLeroy to give Ratliff the win, by just 402 votes of the 116,204 cast. Ratliff now faces only Libertarian Jeff McGee and Green Paul Cardwell in November. Unless the radical right makes a stunning rally behind McGee, Ratliff is as good as seated.

District 10: The less certain progress was made in Dunbar's stepping down, followed by her handpicked successor's defeat in the primary. That defeat still leaves uncertainty – a win by Democrat Judy Jennings would thrill progressives, but a victorious Republican Marsha Farney will be good news only if her "Common Sense Conservative" motto actually translates into sensible votes; thus far, she hasn't firmly rejected fundamentalist ideology.

District 12: The likely step backward was the primary defeat of Geraldine "Tincy" Miller (north suburban Dallas) – one of only three Republicans on the board who defended the teaching of evolution and rejected creationism (the others were Lubbock's Bob Craig and Weath­er­ford's Patricia Hardy). Miller was taken down by George Clayton, a Dallas Independent School District administrator, who's a bit of a cipher. While his dislike of "teaching to the test" – the overemphasis on standardized testing that plagues Texas schools – is encouraging, science teachers must have cringed when he told the Dallas Observer, "It's an impossibility to talk about evolution without mentioning creationism." The defeat was stunning – according to the Texas Tribune, Clayton spent a mere $1,788 on the campaign, against Miller's $54,685 and her tenure dating back to 1984. That tiny bit of cash netted him almost 52% of the vote. Only Libertarian Amie Parsons now stands between Clayton and the SBOE.

District 3: Another seat that's a question mark: Democrat Rick Agosto (San Antonio down to the Valley) was always considered an unreliable swing vote, sometimes siding with the fundamentalists at crucial moments. Amid charges that he had business relationships with companies seeking contracts from the board, he decided not to run for re-election. Democrat Michael Soto, a Trinity University literature professor, appears likely to replace him, although Republican Tony Cunningham drew a respectable number of votes in the primary.

Incumbents either unopposed or facing only token opposition: 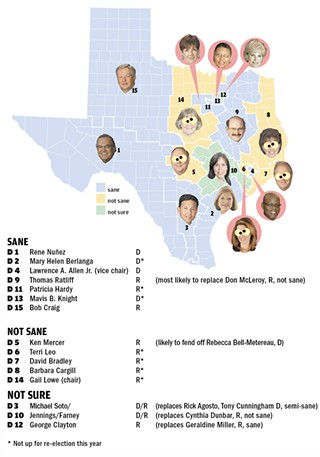 Christian fundamentalists have for years held sway on the 15-member State Board of Education. Here's a statewide breakdown of the current membership and what to expect after the November election – and a bit of uncertainty in at least three districts, including the open District 10 race between Democrat Judy Jennings (sane) and Republican Marsha Farney (who could swing either way).

* Not up for re-election this year