New Captain of the Cactus

There's a new manager at the Cactus Cafe: On Sept. 8, KUT announced it has hired Matthew Muñoz – a former music label and promotions manager who has worked for Universal Music Group and Warner Bros. in Los Angeles as well as local label Justice Records – who was not on the supposed short list of finalists for the job. (For more on Muñoz and the search, see "Off the Record.") This hire is only the first step in rebuilding operations at the Cactus. The current business model splits responsibility for the venue between KUT – which will run the music side – and the Texas Union, which will handle day-to-day operations. That means the Union will keep all the money from the bar, which is traditionally how music venues turn a profit. Under that scenario, KUT Associate General Manager Hawk Menden­hall said, "The Cactus can't succeed as a 150-seat room on ticket sales alone." While he could not rule out some subsidy for the musical operations in the first year, Mendenhall said that he hoped Muñoz could build the Cactus brand through new media and new projects like musician master classes for students. He added, "From [KUT's] standpoint, we see it as a real key point of our music strategy going forward." – Richard Whittaker 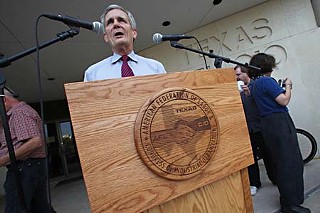 The annual Labor Day fish fry event, a long-held Austin tradition of the Texas AFL-CIO, gives officeholders and candidates a chance to meet, greet, eat, and speak – this time at a brand-new podium, shown here with U.S. Rep. Lloyd Doggett. Constable Bruce Elfant handcrafted the podium as a gesture of thanks to the union hall for serving as host location for Elfant's annual ice cream socials over the years. (Photo by Jana Birchum)

Staff from Capital Metro met with Leanderites on Aug. 26 regarding the agency's proposal to eliminate express bus route Nos. 984 and 986 (see "Cap Metro to Suburbanites: Get Off the Bus," Aug. 27) – and, as a spokeswoman said on Cap Metro's blog, "We got quite an earful." Riders did not want the additional travel time required if forced to take the 987, and they wanted to retain drop-off points on the east side of UT. In response, staff has compromised with a new proposal that would combine the two routes (which currently are essentially the same, except one starts in Leander and the other starts at Lakeline Station) into a new one, the 985. Details of the proposal are available at www.capmetroblog.com. Cap Metro still has two public meetings planned regarding proposed January service changes: Monday, Sept. 13, 5-6:30pm, at Leander Station (800 Hwy. 183 N., Leander), and Tuesday, Sept. 14, 4:30-6pm, at Lakeline Station (13701 Lyndhurst). And a public hearing will be held Monday, Sept. 20, 11am-noon, at Cap Metro's East Austin headquarters, 2910 E. Fifth. – Lee Nichols 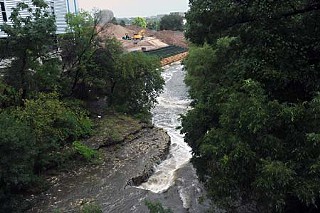 This week's heavy downpours caused plenty of flood damage, leading to road and greenbelt closures, a wastewater spill in northwest Austin, and no shortage of wet stuff in local creeks and streams. This area of lower Shoal Creek, along the former site of the decomissioned Green Water Treatment Plant (undergoing construction for commercial development), reflects an unusually robust waterway. (Photo by John Anderson)

Brothers LaBaaron and Brandon Hutch­ison were found guilty last week of of aggravated assault in connection with the May 2009 shooting outside the now-defunct club Spiros on Red River. The brothers were each sentenced to two terms of 20 years in prison for two counts of aggravated assault. As rappers with the La Grange-based LG Allstarz, the Hutchison brothers were scheduled to perform at the club that night, but when they showed up late for their gig, they were told they could not perform. They got into a fight at the club and left; they later returned armed and fired randomly into a crowd of patrons outside the club. Eight people were injured, and all recovered. The brothers' sentences will run concurrently. – Jordan Smith 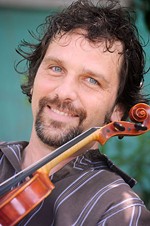 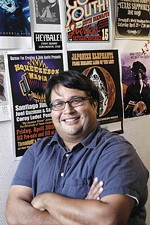