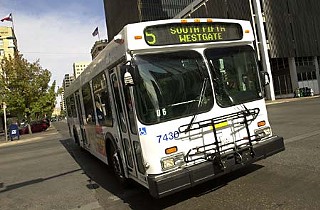 Capital Metro last week released its proposed fiscal year 2011 budget, totaling $228 million. We'll explore it in greater detail next week, but here are some highlights of the plan, subject to revision and approval by Cap Metro's board of directors:

• Cash reserves are expected to grow, but not as quickly as in the past year. At the beginning of FY 10, the agency's reserves stood at a perilously paltry $3.8 million but were projected to stand at $15.7 million by the end of that fiscal year. In FY 11, the reserves are anticipated to grow only by $1.3 million to $17 million. The agency's ultimate target is $34 million.

• Ridership is expected to drop by about 2.5 million riders to 31 million, due to fare increases enacted in FY 10.

• Revenues from fares are expected to rise despite the loss of passengers, due to further proposed fare increases (mostly in multiride passes and the elimination of free fares), and overall revenue is expected to rise due to an anticipated 2.7% increase in sales tax revenue. Sales taxes account for 74% of Cap Metro revenue, with passenger fares providing only 6%. Other major sources include freight rail operations and grants.

• Bus operations are expected to eat up 68% of the budget, paratransit services 17%, freight operations 7%, and MetroRail 6%.

• Service hours will be cut by 10,299 – from 1.58 million to 1.57 million. A slight increase in bus and rail is more than offset by a big reduction in MetroAccess (the paratransit service for customers with disabilities unable to use fixed-route service): a drop of 32,928 hours – more than 10%.

• Service miles will increase. Total service will jump from 20.1 million miles to 22.1 million miles. MetroAccess will gain 311,259 miles, increasing from 3.7 million to 4.1 million.

The transit agency's board of directors will hold a public hearing on the proposed new budget at noon Monday, Sept. 20, at its headquarters at 2910 E. Fifth, and will discuss and vote on the budget at 10am Friday, Sept. 24, at the same location. The entire budget document may be downloaded at www.capmetro.org.