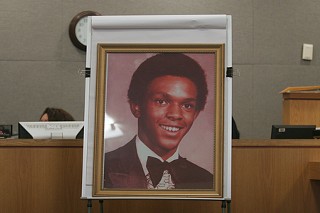 The Timothy Cole Advisory Panel on Wrongful Convictions made five major proposals last week for lawmakers heading into next year's legislative session. The panel, named for the state's first posthumously exonerated man (he died in prison while serving time for a rape he did not commit), was tasked with considering the causes of wrongful conviction and making recommendations to avoid future miscarriages of justice. Among those were recommendations that state police agencies record all suspect interrogations and adopt model policies for handling eyewitness identification procedures. Another proposal recommends that state lawmakers reform post-conviction law to allow for DNA testing of evidence regardless of why it was not previously tested. But whether the recommendations will be adopted and passed by legislators in 2011 – and whether they'll actually have their intended effect – remains to be seen.

Chief among the group's recommendations is to require the Bill Blackwood Law Enforce­ment Management Institute of Texas at Sam Houston State University to work with law enforcement and scientific experts in eyewitness ID to "develop, adopt, [and] disseminate" information to Texas police agencies and annually review policy and training materials on the administration of live and photo lineups.

Dealing with the problem of poor eyewitness ID is no small matter in Texas, where faulty IDs have been implicated in more than 80% of the state's DNA exonerations (there are 41 to date). Moreover, according to a 2009 report by nonprofit the Justice Proj­ect, only 88 police agencies – out of 750 that responded to inquiries – could supply any written policies covering live or photo lineup procedures. The debate over how to cut down on faulty IDs has proved the topic to be somewhat controversial; in the last legislative session there were competing approaches, but ultimately a police policy and training bill – the same as is being recommended by the panel – is what went forward, in large part because Gov. Rick Perry had made it clear he would veto any bill that required police to actually follow a specific set of eyewitness ID procedures defined by legislators. Still, that bill did not become law, leaving the recommendations for how to proceed on the desk of Timothy Cole Panel members.

The decision to go with the "model policy" approach – which would require police agencies to adopt a written policy (in itself a marked improvement) – hasn't impressed everybody, including Jeff Blackburn, founder and chief counsel of the Innocence Project of Texas. In a guest blog for Grits for Breakfast (the long-running and widely read criminal justice reform blog run by Scott Henson), Blackburn argues that the panel's recommendations, especially for eyewitness ID, are just a "watered-down version of what has already been in play in prior legislative sessions." In a concurring report, panel member Sandra Guerra Thompson, a professor at the University of Houston Law Center, writes that the panel recommendations should have gone further to include more stringent protocols for IDs, including the use of blind and sequential lineups. These methods require that witnesses be shown lineup photos one at a time (rather than as part of an array of photos) and that the officer administering the lineup be unaware of who the suspect is and whether he or she is actually included in the lineup. These strategies have been shown in research to result in more reliable identification. "Some law enforcement officials have taken the position that laboratory studies are not relevant to real police work, but the constant flow of DNA exonerations proves that the findings of those laboratory studies were right all along," Guerra Thompson wrote. "Those studies have overwhelmingly demonstrated the problem of 'relative judgment' that causes erroneous identifications and that sequential identification procedures can minimize this effect."

The panel appears unanimous on other recommendations, including the suggestion that lawmakers amend the law governing post-conviction appeals to allow for testing of any "previously untested biological evidence, regardless of the reason the evidence was not previously tested" or for retesting evidence that was previously conducted with "older, less accurate" testing methods. More­over, the group has recommended that the law be amended to allow inmates to appeal based on advances in science that may undermine the reliability of evidence originally used against them. Locally, such a change could benefit Fran and Dan Keller, who were convicted in 1992 of having sexually assaulted a child at their home-based day care in Oak Hill; the only physical evidence against them came from a doctor's assessment that a child's hymen appeared damaged (see "Believing the Children," March 27, 2009). The same doctor last year told the Chronicle that not long after the Kellers' conviction, he learned that advancements in science now suggest that what he'd seen was neither abnormal nor suggestive of sexual abuse. (The Kellers are still in prison; Blackburn is working to get them a chance to prove their innocence in court.)

The panel's recommendations have been accepted by the Task Force on Indigent Defense, and now state Sen. Rodney Ellis, D-Houston, hopes his colleagues and the governor (whoever that may be next year) will make passing the recommendations into law a priority. "Now the ball is in the Legislature's court. I call on my fellow legislators ... to dedicate ourselves to creating a justice system that truly protects the innocent, ensures the guilty are brought to justice, and is instilled with the fairness and integrity that justice demands," Ellis said in a press statement. "We owe Tim Cole and his family that much."