All Things Budgetary ... and WTP4

The proposed plant dominates budget discussions at the dais 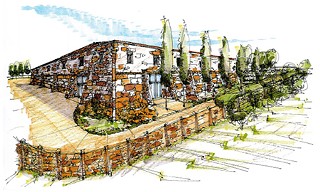 WTP4 pump station (Courtesy of The City of Austin)

The stars come out at night, and the evening hearings at City Council last week were no exception. Public hearings on the city budget, planned rate increases at Austin Water, and more drew a constellation of well-known hall watchers, largely from the environmental community and near-unanimously aligned in opposition to Water Treatment Plant No. 4.

Due to lengthy executive sessions – plus a protracted historic zoning appeal brought by a neighborhood opposing a property owner's demolition plans (returned to Planning Commission), a controversial impervious-cover swap between the two principals behind the Domain (passed on first reading), and several other public hearings – council didn't start taking input on the proposed budget until 9:15pm. With the projected cost of WTP4 estimated between $500 million (by the city) and $1 billion (by opponents including interest), several speakers signed up to denounce the plant and were audibly dismayed over the late start. Roy Waley of the Austin Sierra Club said he was there "to talk about budget issues. Today I budgeted some time between 4 and 6 o'clock to come down and talk to y'all, and I'm a little over budget."

While several speakers argued specifically against AW's planned rate increases for 2011 – a 4.5% combined systemwide increase, led by a 5.7% increase to residential bills, resulting in a nearly $4 hike to the average homeowner's bill, from $67.35 to $71.19 – environmentalist and council gadfly Paul Robbins argued against the necessity of the plant itself. Speaking to 2010's summer, he said: "Austin's maximum usage was last Sunday, August 22. We used 191 million gallons per day. But compared to what? ... Our current capacity [285 MGD] exceeds 2010 peak use by 49 percent; if Water Treatment Plant 4 is added [at its initial 50 MGD capacity], it will exceed 2010 peak use by 75 percent. This is despite only modest enforcement of the two-day mandatory watering schedule and lackluster conservation programs that have been implemented in the last three years." (Robbins wrote that since the hearing, Austin experienced a higher peak Aug. 29: 193 MGD. "My general point is still the same," he added. "We are swimming in capacity.")

Tempers briefly flared when Save Our Springs Alliance Executive Director Bill Bunch asked Mayor Lee Lef­fing­well whether WTP4 is part of the proposed budget – partly in response to Leffing­well's earlier complaint that speakers were dwelling on the plant project instead of directly addressing budget questions. "It is remotely a component, yes," he answered. Bunch reacted angrily, asking, "A $500 million plant is 'remotely' part of the budget?" and the mayor responded, "Do you want to control yourself, or do you want to be removed from the chamber?" More quietly, Bunch continued: "I would respectfully ask that you not insult the intelligence of this community by pretending that Water Treatment Plant 4 is not part of the budget and is not germane to this public hearing. It certainly is." Bunch followed with the broader charges that the plant is not needed now and is too expensive and that the potential environmental consequences have not been fully resolved.

Some of the WTP4 opposition was more specific. Several opponents from the Spice­wood Springs Road Tunnel Coalition came out against the plant for the impact its construction (primarily of transmission main lines) will have on their neighborhood. Spice­wood Springs resident Desmond D'Souza proposed an alternate water main route from the plant to storage reservoirs, one that wouldn't affect his neighborhood by siting a large shaft there, which would create noise and thousands of truck trips. The "Hybrid 620" route would instead run primarily in a trench along Highway 620, bypassing the environmentally sensitive Bull Creek Preserve in the process. D'Souza also poked leaks in AW's defenses: The utility complains the alternate route would require some 40 additional easements; D'Souza noted that the Austin Clean Water Pro­gram has acquired yearly between 80 and 200 easements. After D'Souza and others spoke, Council Member Randi Shade said: "If we're going to do things, we're going to do it right. We're going to take seriously what you have brought up in terms of the utility," a sentiment that found favor elsewhere on the dais, and the utility was directed to consider the alternatives.

Despite the intense focus on WTP4, other speakers addressed other budget issues. Disability advocate Jenni­fer McPhail of ADAPT of Texas asked the council to preserve funding for accessibility needs like sidewalks. But it was clear that to many in the chambers, the threads of the budget and the costly construction of WTP4 and its role in driving Austin's arguably unsustainable growth were bound in an intractable Gordian knot. Speaking before the bloodletting, on a hearing over the Imagine Austin Compre­hensive Plan's "vision statement" (which council approved), longtime enviro Mary Arnold argued that the "folderal" of the platitudes-heavy document was "ignoring the basic information we should be studying" to manage growth – largely annexation and taxation policy. Citing an omnibus annexation of more than 2,000 acres in Travis County that had occurred earlier in the meeting, Arnold thundered, "Whisper Valley is urban sprawl!" to considerable applause.