On Aug. 23, the Austin Independent School District board of trustees approved a nearly $1 billion budget for the 2010-11 school year. However, the smiles and applause for the unanimous vote marked the end of a brutal week of negotiations and not-so-subtle threats from elements of the business community against a proposal to raise the tax rate, which the board scrapped.

The approved budget, worth $974 million, breaks down into three sections (see graph): food services, primarily paid for by federal funds; debt service, covered by the interest and sinking component of residents' property tax bills; and the General Fund, which is primarily paid for by the maintenance and operations tax rate. To cover a projected tax shortfall, the district will use $12.2 million of its fund balances, including $6.3 million from the General Fund approved by the board in April for mission-critical first-year spending under the new strategic plan. As part of the budget process, the board approved an increase on the interest and sinking, or bond repayment, rate of 2.5 cents per $100 of property valuation. That brings the combined rate to $1.227 per $100, though homeowners are not likely to see an increase in their bill, due to a 3.7% average drop in appraised property values.

The board quietly dropped a second proposal – to pay for full-time prekindergarten education, additional investment in East Austin, and a 3% teacher pay raise with a 5-cent bump on the maintenance and operations rate. That tax increase would have required voter approval on the November ballot, but trustees let the measure die without a vote after pressure from business interests. 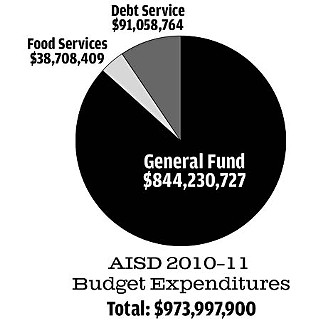 The Monday meeting was blandly procedural compared to the fireworks at the Aug. 19 public budget meeting. After an Aug. 14 Austin American-Statesman editorial accused the board of trying to pass a "huge tax hike," several prominent members of the business community came out against the measure. Downtown Austin Alliance Executive Director Charlie Betts metaphorically waved over the board's heads the $50 million that his members pay in AISD property taxes, while attorney John Blazier threatened that "the business community will spend money to oppose you." The Greater Austin Cham­ber of Commerce was more oblique, merely stating that it "continues to ask trustees to adopt greater efficiencies – and certainly not to dig a deeper fiscal hole – before considering a tax rate election."

Heading into the Monday meeting, expectations had been high for continued friction. Instead, Education Austin's vice president for classified employees, Rae Nwosu, told the board during citizen's communication that the union was withdrawing its request for a ballot initiative. After last Thursday's outbursts, the union met with board members and administrators over the weekend and realized the district was unwilling to clash publicly with the chamber. Conceding the political realities of the situation, outgoing Education Austin President Louis Malfaro said, "When you're beat, you're beat."

That the opposition to a tax rollback election was so sudden and vitriolic surprised many supportive groups, including nonprofits Liveable City and Austin Interfaith. AISD Board President Mark Williams said: "The [election] had been in the background, and I think some people had thought it wasn't going to happen. It really wasn't until Educa­tion Austin came forward with a poll that said that 57% of people [backed a tax increase] that they got serious." Had the board pushed ahead with a vote, he said, rather than "people coming together to work collaboratively, we get into a conflict situation for the next three months that probably has legs beyond that."

Even with an approved budget, the board is still looking for spending cuts. Trustee Annette LoVoi suggested cutting utility bills through innovative energy usage reduction programs, while board Vice President Vince Torres proposed the same for water. The only possibility for new cash comes in the form of a federal job protection measure passed Aug. 10. Gov. Rick Perry has opposed the law's compliance clauses (see "Perry vs. Texas Teachers," Aug. 13), but if he doesn't stand in the way, then AISD could receive an extra $17.5 million. Nwosu has requested that the board consider using $10 million of that for a 2% teacher pay raise. According to the Texas Association of School Boards, basic salary for an AISD teacher is 49th out of the 50 largest school districts in the state. Malfaro said, "Maybe if they give us that 2%, we won't be 50th out of 50."

There is even less comfort for the district's classified and paraprofessional workers. The Southwest Workers Union had been seeking a 7% pay raise for staff, including bus drivers and custodians. That may sound like a hefty hike, but, as union organizer Chavel Lopez noted, to support a family of three paying fair-market rent, "a worker would need to earn at least $35,788 to be able to meet their basic necessities. A lot of these workers earn barely $10,000." His union had asked the district to give cafeteria workers an extra $50 a year for their uniform allowance. That's a lot for an employee earning $7.25 an hour, but the total cost to the district would have been less than the $41,500 bonus that the board awarded Super­in­ten­dent Meria Carstarphen on Monday.

While there will be no tax election this year, the board has suggested that it may be easier to make the case for a November 2011 vote; that would give the district more time to sell the proposal to the chamber and the general public. However, said Malfaro, "I hate to be a pessimist, but I don't think voters will be any more amenable to an election in a year's time."