Voters in November may be asked to chip in for education 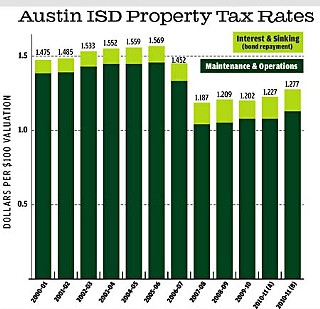 Option A: 2.5 cents per $100 valuation increase in total property tax rate
Option B: 7.5 cents per $100 valuation, which will require voter approval in the November election
If the AISD board adopts both proposed tax rates and voters approve an increase in maintenance and operations, the combined rate would still be at the lower end of the taxing spectrum, compared to previous years.

Austin Independent School District's board of trustees will be looking for public input at its Aug. 19 meeting into a possible property tax election on the Nov. 2 ballot. That input could be vital: So far the board, teachers' union Education Austin, and the Greater Austin Chamber of Commerce are split – not on the need to fund vital projects but on whether the district has started the discussion too late.

Whatever happens, there is a tax increase coming. The trustees are likely to approve a 2.5 cent per $100 valuation raise on the interest and sinking part of the tax rate, which covers bond repayments. Yet the district calculates that the average homeowner should see no change in their tax bill. Increasing the total tax rate from $1.202 per $100 valuation to $1.227 should offset a 3.7% decline in Travis County property values, making this a zero-sum equation. However, the board is also considering an extra 5 cents per $100 to go to the main­ten­ance and operations budget. That increase, which would raise the total tax bill to $1.277 per $100 valuation, would require voter approval, and that's where the controversy has developed.

If adopted, the extra 5 cents would go to dedicated spending: First, a 3% teacher pay raise; second, a one-time investment in East Austin schools; and third, replacement prekindergarten funding in 2011, when the state is scheduled to pull back from paying for it. The board has already agreed to let Super­in­tendent Meria Carstarphen dip into the district fund balance by $6.3 million, and the district is also in line to receive more than $18 million in new federal education cash (see "Perry vs. Texas Teachers," Aug. 14), but these new priorities will require the owner of an average Austin home – valued at roughly $247,000 – to accept a $3.21 per week increase in their property tax bill. Outgoing Education Austin President Louis Malfaro said, "If you're going to do a pay raise, if you're going to have funding for pre-K that isn't one time, you need to have a revenue stream for that, and that means a modest increase in the taxes."

Board President Mark Williams said that while the discussion of an election had moved out of the spotlight over the summer, the underlying issues of pay parity, AISD's competitiveness with surrounding districts, and historic localized needs haven't changed. While the board is still examining its finances to see what other savings can be made, he said, "There's a need to make critical investments this year, but we don't want to take away from anyone else."

However, the district still has to sell its logic to some powerful stakeholders. An unsigned editorial in the Austin American-Statesman said Carstarphen "failed to make a viable case for a huge tax hike." But Carstar­phen rejected that accusation and said, "We provided financial scenarios to the board as early as March that included a November 2010 [tax rate election]." In June, before taking its summer break, the board requested that she and her staff research the possibility of a tax election and, she said, "We brought that information back as soon as we could at the first meeting in August."

However, unless the board adopts a budget that requires a tax increase, there won't be an election. While Malfaro argued that the May board elections had increased trustees' focus on the rate, so far only three board members – Lori Moya, Sam Guzman, and Tamala Barks­dale – have come out solidly in support of that spending. Board Vice President Vince Torres said the others are still waiting for a recommendation from Carstar­phen, and he voiced frustration that she hadn't given one already. He said, "At the earliest [her recommendation is] not going to be until the public hearing on the 19th, and then we vote on it on [Aug. 23]. What sort of planning is that?"

Even if the board does adopt both rate increases and voters approve the main­ten­ance and operation increase in Novem­ber, the combined rate of $1.277 per $100 of valuation will still be at the lower end of the taxing spectrum (see chart). Historically, Austin voters have supported education spending, backing AISD bond packages and passing a 3.9 cent maintenance and operations increase in 2008 with 59% of the vote. Education Austin has done polling for the district that has 54% of voters strongly in favor of a tax increase, with another 3.5% leaning for it. However, those numbers come with a 5% margin of error, meaning the increase is far from a done deal.

It may also lack the backing of the Greater Austin Chamber of Commerce. Vice President for Education and Talent Development Drew Scheberle led the chamber's campaign for the 2008 increase but said that this time he's troubled by what he sees as a lack of commitment from the board or the superintendent's office to implement the 2010-2015 strategic plan adopted last December. Unless the district's supporters can make a stronger case for the need for more cash tied to the strategic plan, he said, "Why would you go to the voters?"