City Council rejects payment to family, will proceed to trial

At its meeting last week, the City Council rejected a settlement with the family of Nathaniel Sanders II. Judge Sam Sparks has now set a trial date for November 2011.

After a marathon, four-hour executive session during which council privately discussed the matter and an hour's worth of public testimony – all in favor of or neutral on the settlement except for Austin Police Associa­tion President Wayne Vincent – deliberation began with a substitute motion from Council Member Chris Riley to pay the Sanders family $500,000 instead of the original settlement proposal of $750,000. Riley called for community reconciliation but said that while a trial looms, "we find ourselves in an adversarial relationship with the Sanders family." Searching for "an end that recognizes the legitimate concerns on both sides," Riley noted that more money had been paid out in other officer-involved shootings, but ones for which the officer was fired. Seeking a figure that wouldn't be "perceived as an admission that the shooting was unjustified," he offered $500,000, an admittedly "absolutely arbitrary" figure "which is far less than Nathaniel Sanders' life was worth."

Council Member Randi Shade began by quoting from a widely circulated article in The Boston Globe, "How facts backfire," that argues "our beliefs can dictate the facts we chose to accept." Seconding Riley's motion, she said, "I sincerely believe that arriving at a settlement agreement that acknowledges that mistakes have been made on all sides, but also doesn't come with the frame as an unjustified shooting, is in the best interest of the city." Following the emotionally volatile public testimony, Riley and Shade's argument, however well-intended, quickly lost the audience. Shade noted, "Nathaniel Sanders had a gun," to which someone in the crowd shouted, "No fingerprints!" (confirmed by forensics), bringing a quick warning from Mayor Lee Leffingwell. Shade pressed on, insisting, "I can't support a settlement that attaches to it a city admission of an unjustified shooting."

"We have simply never, to my knowledge, in the history of the city, done this," replied Council Member Sheryl Cole, arguing against the motion for a $500,000 settlement. "Where we've had a settlement offer, where we've instructed staff to go and negotiate in good faith and they have done that and come back with an offer, and we decide that it is too much and put another number on the table" – a breach, in her eyes, of council direction to "go negotiate in good faith." Cole characterized the change as setting a bad precedent: "It's bad policy because it puts us in uncharted waters."

Council Member Bill Spelman, also in opposition to the motion, spoke to the headline crux of the anti-settlement argument, that the Sanders' family attorney, Adam Loewy, had "claimed in an unguarded moment that if we accepted the settlement, that we were somehow admitting something" (the lawyer's statement had become a driving force in the APA's opposition). "I can look at the facts for myself and decide what it is that I think is true. If Adam tells me accepting $750,000 is a settlement, somehow admitting something, admitting that officer was guilty to some degree of making a mistake or conduct of some sort, that's Adam's opinion, not my opinion. I do not feel bound to accept Adam's opinion in this matter. ...

"I would like to have paid $500,000 or some other smaller number," Spelman continued. "Weeks ago, months ago, through the negotiation process, we might have ended up with a number like $500,000, but that is simply an unrealistic number right now."

"Two weeks ago, when we started really looking at this decision, it felt like a very complicated decision to me," she concluded. "Today it feels very simple. And the simple answer for me is that it is right to accept the settlement as recommended by the legal staff."

Leffingwell then spoke, arguing that the $500,000 compromise "is not much difference" from the original $750,000 settlement. While he could support a figure matching potential litigation costs, "that number is far, far below either one of the numbers that we're talking here today." Moreover, he said the payment "sends a message that the city of Austin admits that this was an unjustified shooting. I don't admit that – I don't think anyone here on the dais admits that. But that's one of those things that once it's out there, that genie is very, very hard to put back in the bottle. ... 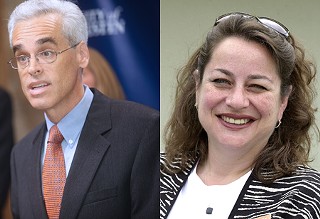 Chris Riley and Randi Shade were the swing votes in turning down the proposed settlement. (Photo by John Anderson)

"I don't want to dwell on monetizing this issue, but what we're talking about here is taking taxpayer money from other taxpaying citizens," he said, returning to the settlement amount. "There has to be a clear and compelling case for that transfer," one he didn't think had been made.

Mayor Pro Tem Mike Martinez, the earliest to declare publicly against a settlement, spoke next, stating: "I don't believe that a community can come together if we agree to a settlement. I don't believe in the long run that we can all agree with what happened and move forward." In the end, Riley's substitute motion failed, netting only Shade's vote and his own.

To Settle or Not To Settle

Cole then spoke in support of the proposed settlement of $750,000. "The premise that somehow if we go to trial we're going to gain more transparency is just simply not true," promising that materials currently suppressed – documents obtained by the Sanders family during discovery – would be available upon settlement. "On a national level, the O.J. Simpson trial, that certainly did not result in community reconciliation. Locally, we know that with the Cedar Avenue trial" – the unsuccessful civil trial brought by several young African-Americans against the Police Department following an 80-officer melee at a 1995 East Austin party – "that that certainly did not result in community reconciliation." Cole emphasized that a trial would be not only painful for the Sanders family but also for defendant Leonardo Quintana and his family.

Cole said council needs to put "the entire city" first. "I don't mean the 1,000 that worked on our campaign or the 500 who gave you money," perhaps a subtle allusion to the APA and its Chamber of Commerce-flattering campaign against settlement, "or the 10,000 that you might get e-mails and hear from or the 50,000 that voted for you – because when we raised our hand we said we were governing for 750,000, whether they voted or gave money or did anything."

Spelman addressed Leffingwell's cost-to-taxpayers argument, claiming "the opposite is true. If we are trying to protect Austin taxpayers, we need to vote in favor of the settlement, because a settlement guarantees the taxpayers will have to spend no more than $750,000." He also argued that a federal trial could cull "jurists from not just Travis County but all over Texas, including Levelland and, God help us, Tulia," the Panhandle town infamous for the trumped-up drug busts in 1999 primarily targeting black residents.

"It's going to be months and months and maybe careers before we stop talking about all this stuff, if we go in the direction of going to court. I think it's time for us to change the subject. We should stop arguing about who's to blame for what's happened in the past, and we should accept responsibility for making sure that we do not repeat the past, that this never happens again, and the best way to do that is to accept the settlement and move on."

Nevertheless, the motion for settlement failed, 4-3 – neither Shade nor Riley siding with Cole, Morrison, and Spelman.

A Fork in the Road

Although the meeting moved on, the discussion ended in tumult. The Rev. Freddie Dixon, director of community affairs at the University of Texas' Division of Diversity and Community Engage­ment, came to the microphone to speak, unprompted, as a matter of personal privilege. Audience members stormed from the room in audible rage, some loudly accusing the majority of being bought by the APA. Responded Shade, "It's incredibly insulting to suggest that any of us who voted the way we did has anything to do with the police union – to ignore the fact that there are a lot of ways to look at this – it's just as outrageous to ignore the fact that there have been so many people who distrust police officers, but it is just – as every African-American male is not a criminal and carrying a gun, it is true that not every officer ..." at which point she dropped her analogy. Shade continued, "I did not make this vote to try to not hurt the feelings of the police association. That was the furthest thing from my consideration on this."

A more fitting coda to the discussion was provided by Dixon: "We cannot move forward if the past is always in front of us, and the past seems to always be in the front of us, as it relates to race relations here in the city of Austin. And if we are to be the city that we are touted in national magazines and across the country, then we need to get beyond the symptoms and the epidemic that is at the core, which is race. And I do feel that the matter that has been taken up here is a betrayal to the community, the entire community, and that betrayal is that the city asked in good faith to negotiate with the family and then midway in that negotiation we say that that negotiation is no good."

Speaking to reporters afterward, Austin NAACP President Nelson Linder was less guarded. While saying council's decision wouldn't affect his plans to partner with the APA in facilitating engagement between beat cops patrolling East Austin and the young black men who live there, he called Leffing­well and Martinez "two-faced cowards" and said the same of Shade and Riley. "They speak with forked tongues. ... This is war."

The next day, Leffingwell issued a statement standing by his decision, adding: "I'm fully aware that my decision was hurtful to some in the community, and I regret that. I would like to have been able to make a decision last night that would have perhaps provided some immediate relief to people who I know are suffering."