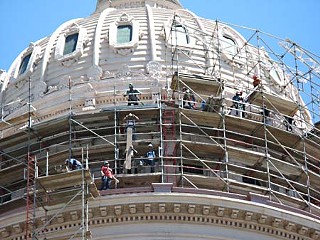 Prepping for paint: Workers set up scaffolding around the Capitol dome before adding a new coat of paint to spruce up the historic structure. (Photo by Richard Whittaker)

It's Raining Cats and Cats

Cat lovers lined up around the Austin Humane Society's North Austin shelter on July 31 ready to take home a new pal during the society's free adoption day. According to AHS spokeswoman Lisa Starr, a total of 161 cats were adopted on Saturday during the free-for-all cat-extravaganza, just 90 cats fewer than the shelter typically adopts out in an entire month. The success of the program was a relief for the shelter, which has been operating at 200% of its normal cat-pacity thanks to a mad breeding season that saw 1,000 cats brought to Town Lake Animal Center in just three months. Just because the free-fur-all is over doesn't mean that now isn't still the purrfect time to adopt a feline friend. The AHS has ongoing adoption specials for kitty lovers. Check www.austinhumanesociety.org for more information on the adoption process. – Jordan Smith

Wondering why the reconstruction of the Governor's Mansion is taking so long? Now there's a handy Web cam showing what's happening. Unfortunately for Gov. Rick Perry, it's being run by EvictRick.com, which is using the live stream to point out that the renovation of the historic home has ground to a halt. Perry actually moved out of the mansion and into a $9,900-a-month property just outside West Lake Hills in October 2007 – eight months before the still-unsolved arson attack turned a scheduled face-lift into a full restoration. Last session the Legislature allocated $22 million – including $11 million in American Recov­ery and Reinvestment Act federal stimulus money – for the repairs. While the State Preservation Board said it hopes to restart the renovation this summer, it has yet to announce a project management firm or get the necessary building permits approved by the Texas Historical Commission. EvictRick.com spokeswoman Katie Naranjo said, "It's really just been sitting there with no one tending to it." Calling the cost of Perry's rental "a double taxation on the people of Texas," she called for him to move back into "the real mansion that [he] should be living in that's being paid for by taxpayers already." – Richard Whittaker

On July 29, the Save Our Springs Alliance, Environment Texas, and University of Texas biology professor Mark Kirkpatrick (who serves as the SOS science officer) filed suit against U.S. Interior Secretary Ken Salazar, the U.S. Fish and Wildlife Service, and the city of Austin in an attempt to stop or delay construction related to the planned Water Treatment Plant No. 4. Most specifically, the suit charges that the city and FWS are negotiating an agreement ("Candidate Conservation Agreement With Assurances") that would allow the city, during construction of the plant's intake and transmission lines, to sidestep Endangered Species Act protections for the Jollyville Plateau Salamander and other ESA-protected species. The SOS brief charges that such an agreement, in the absence of an environmental impact determination that the work will have no significant negative environmental effects, effectively violates both the National Environmental Policy Act and the Texas Parks and Wildlife Code. The plaintiffs also cite numerous other neighborhood and citizen objections to WTP4 and ask for a ruling that the defendants are violating federal and state law. – Michael King