'The Next New Thing'

Can AISD fulfill the promise? 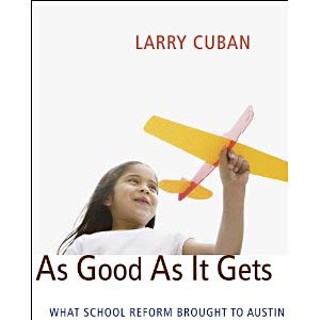 At first glance, the Promise Neighborhoods initiative looks like a great way to fix what has ailed Austin schools and to give AISD students a better chance at a worthwhile education. Then again, that's what the Office of High School Redesign was supposed to achieve when it opened in 2005. Same for the establishment of Blueprint Schools in 2002, 1987's Plan for Educa­tional Excel­lence, and Superintendent Meria Carstarphen's new Turnaround Initiative.

According to Larry Cuban, professor emeritus of education at Stanford University and author of As Good as It Gets: What School Reform Brought to Austin, the problems of charting educational reform in Austin follow the national experience. His book chronicles that past 60 years in the history of AISD and asks the simple question: Why haven't these initiatives fixed the district? The problem, the book suggests, is not that they are good or bad programs; it's that no one knows if they work or not. That leads to what Cuban calls "reform churn" – constantly replacing one new program with another, or superimposing them on one another.

While a massive amount of data is collected for federal, state, and local metrics, the numbers gathered are used punitively, not analytically. Even though many reforms introduced under Super­intendent Pat Forgione, such as strategic compensation and professional learning communities, were aimed at motivating and developing teachers, "there was no systematic analysis of what goes on in classrooms," Cuban told the Chronicle. "So that second step of seeing what really happens when these reforms hit the classroom, that isn't really happening at all."

Moreover, the belief that replacing staff in the hope that different teachers and principals can suddenly produce miracles – now enshrined in state law as part of the Texas Education Agency's mandatory repurposing regulations – can lead to what he dubs "churn and burn," where staff turnover eradicates any sense of continuity and destroys any chance of mapping what does and doesn't work in the classroom. That only accelerates the cycle, Cuban said, "because you never really find out what happens, and people say, 'Well, you know, that was interesting, but it didn't work, so let's do the next new thing.'"

Part of the problem is that school districts are pulled in different directions by two opposing philosophies of reform. At one end of the continuum are those Cuban describes as "entrepreneurial, who say schools can do it alone and accept no excuses." At the other, he said, are those "who say, 'Sure, you should hold schools accountable, but you can't hold them responsible for the history of poverty, the history of segregation, and the consequences that flow from that legacy.'" Traditionally, Demo­crats have pushed the more holistic approach while Republicans have leaned toward the "blame the teachers" approach – but now, he said, "the dominant rhetoric [of both parties] is: 'Pull up your socks. No excuses. Schools can do it alone.'"

In that context, that the White House has pushed the Promise Neighborhoods initiative so hard seems almost aberrant. Yet by accepting that not every child enters kindergarten with the same advantages, Cuban suggests, this approach has the potential to really break the disparities in the educational system. One core problem shared by Austin school reforms to date has been that "there isn't enough coordination with other city agencies and of social and medical services that would extend the reach of schools into the community." That a Promise Neighborhoods grant could encourage that collaboration is, for him, "a big plus."