SCJC to Keller: Consider Yourself Warned 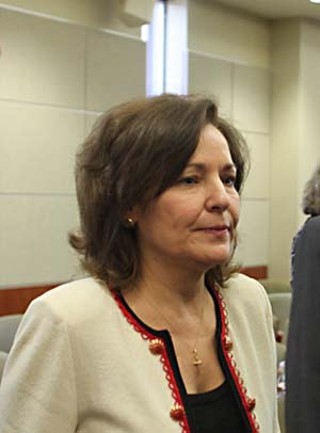 Criminal Appeals Judge Sharon Keller received a public warning for her actions in the last-minute appeal of a death row inmate. (Photo by Jana Birchum)

Texas Court of Criminal Appeals Presiding Judge Sharon Keller has been handed a "public warning" by the State Commission on Judicial Conduct for violating standards set out in the Texas Constitution, the Texas Government Code, and the state's Code of Judicial Conduct in connection with her actions to close the court to a last-minute appeal by death row inmate Michael Richard. Richard, who sought to challenge as unconstitutional the three-drug cocktail protocol for lethal injection, was instead put to death on Sept. 25, 2007, without his appeal being considered by the court. That same day, the U.S. Supreme Court had agreed to hear an unrelated case challenging the lethal injection protocol, a move that imposed a de facto moratorium on executions until the case was decided the following spring. In other words, Keller blocked an appeal that likely would have allowed Richard to live for at least several more months.

At issue is Keller's now-infamous statement that the CCA closed at 5pm, which blocked Richard's attorneys at the Texas Defender Service – who say they'd been having computer problems – from filing the appeal. Keller failed to follow the court's execution-day procedures that would have had her refer all communications about Rich­ard's case to the assigned duty judge, Cheryl Johnson. Keller's actions cast "public discredit on the judiciary or the administration of justice," the 13-member commission found, and Keller "did not accord Richard access to open courts or the right to be heard according to law."

The decision to issue a public warning was just one of the options before the commission, which could have decided to remove Keller from the bench. "The Commis­sion takes this action in a continuing effort to protect public confidence in the judicial system, and to assist the state judiciary in its efforts to embody the principles and values set forth" under the law, reads the commission's ruling. Keller's attorney, Chip Babcock, told the Fort Worth Star-Telegram that Keller is considering an appeal of the decision.

The public warning is "useful, but it is not enough," said Scott Cobb, president of the Texas Moratorium Net­work, which filed a complaint against Keller in 2007 in response to her inaction in the Richard case. "The people of Texas have been publicly warned today that we have an ethically compromised judge on the Texas Court of Criminal Appeals who did not accord a person about to be executed with access to open courts or the right to be heard according to law, yet she has been allowed to keep her job," he said in a statement. "This is the worst case scenario for Texas, because now we know that the problems in the Texas death penalty system reach to Texas' highest ranking criminal appeals court, and yet the judge who closed the doors to justice remains" on the court.