The Spa at Hancock and 41st?

The Perry Estate – a nearly 10-acre tract in Central Austin, listed on the National Register of Historic Places – has had numerous incarnations over the years. Once a quarry and gravel pit, in 1928 it became the site of a Mediterranean-style mansion and estate built by cotton tycoon Edgar Perry. The mansion since has housed a series of private schools, including St. Mary's Academy for Girls (1948), Holy Cross High School (1968), the Perry School (1974), and today the Sri Atmananda Memorial School and the Griffin School. Now, Georgetown developer Clark Lyda and Overland Partners have drawn up plans to turn the estate into a destination luxury hotel and spa.

The tract is located at 41st Street and Red River, just across from Hancock Golf Course and the Hancock Shopping Center (near I-35 and a few blocks north of the partly foreclosed University Park project). On its north and west sides, the property is bordered by 19 single-family home lots. Last December, said Lyda, his team entered into a contract with the nonprofit KPM Institute (Sri Atma­nan­da Memorial School's operator). He said equity investors include Overland Partners (the firm that designed the Lady Bird Johnson Wildflower Center), which has done early concept drawings. Lyda said his team will not file city development applications (requesting new commercial zoning) until it reaches an agreement with the Hancock Neighborhood Association.

As envisioned, the development includes a five-star hotel with up to 90 rooms. It would have an upscale restaurant, a spa and pool, and an amphitheatre for weddings and acoustic performances. The development team has committed to historic preservation of the mansion (now in serious disrepair, they claim), its formal garden, a chapel, and other 1928 buildings on the site – with an eye to historic zoning and accompanying property tax abatements. Developer representatives have said they'll commit in writing to numerous provisions to ensure a high-quality, compatible project with first-rate architecture, green-building features, sustainable operating practices, and clean-green technologies.

The Hancock Neighborhood Association and individual residents have been closely questioning the developers. In May, HNA submitted questions about the quality, scale, and appropriateness of the project, as well as the parking, traffic, light pollution, and noise it could generate. Some homeowners have lobbied for a smaller boutique hotel or another use. Waller Creek runs through the property, raising water-quality and flooding concerns. 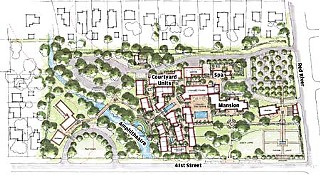 Georgetown developer Clark Lyda envisions a destination development at 41st and Red River, with a luxury hotel, restaurant, pool, spa, and amphitheatre. The plan calls for preserving the historic mansion on the site. (Illustration courtesy of Overland Partners)

Development team responses to HNA note that the rezoning requested would come with restrictive covenants; they provided assurances about the project's site development and sustainability. For example, the developers plan to restore Waller Creek and "the aquatic plant and wildlife ecology native to the creek." Additionally, they say, "A sustainable use for the Perry Estate that respects and enhances the historic role of the Estate in the neighborhood and respects the established neighborhood character will increase the desirability of the surrounding area." Lyda once attended the Perry School. "I'm in love with that piece of property, and I have a long tie to it," he said. "It's a really special piece of Austin that has a huge amount of history associated with it."

But HNA member Sharon Jones said she and others simply do not want any commercial use on the site. Jones said HNA's 2004 neighborhood plan ruled out new commercial development for the parcel, or anywhere west of Red River. Its future land use map, although nonbinding, designates the entire site for civic (school) use. However, the full property is actually zoned SF3, for single-family homes. Under that classification, in principle, it could be redeveloped into lots for at least a dozen new houses. Among Jones' concerns: "We believe Hancock golf course is in danger of being converted to commercial use after this precedent is set."

"The neighborhood association has been alarmingly acquiescent to Lyda and unresponsive to concerns of those with property abutting the estate," Jones charged in an e-mail to the Chronicle. But Bart Whatley, chair of HNA's zoning committee – and also chair of the city's Design Commission – said HNA leadership is using an open, democratic process to ensure all voices are heard and hasn't yet decided to endorse the project. (The committee meets again July 21.) "Many people are generally supportive; they see it as a good adaptive reuse," he said. "Nearly everyone recognizes the value of preserving the mansion."

As part of the deal, Lyda said, the financially challenged Sri school would have its debt paid off and would be allowed to continue operating in a new school on the site, rent-free, for 20 years. The small school cannot afford to maintain the property or sustain itself, so some solution is needed. Mean­while, the Griffin School, a tenant on the property, is seeking new lease space elsewhere.

Jones raised concerns that the hotel could fail, leaving the neighborhood with a "white elephant" – due to Lyda's lack of hotel experience, an inadequate demand for the location, or weak financing. The Hancock neighborhood is battle-weary; it previously endured a long fight over redevelopment of the Concordia University campus. (A 210-room luxury Hyatt Andaz hotel within the resulting University Park project on the site was supposed to open this year; it has yet to break ground.) Lyda responds that experienced hotel operators (including Bunkhouse Man­age­­ment, which runs the San José and Saint Cecilia boutique hotels in Travis Heights) consulting on the project have confirmed a market and would assist with operations. He also said the project will be done primarily with up-front equity financing, rather than being highly leveraged with conventional loans.

Both Lyda and Whatley say discussions are going well; HNA is now reviewing a "very stringent" draft agreement, said Lyda. He hopes to reach a final agreement with HNA by September or October, after which he would file a city zoning-change request.