The city's Fleet Services story is getting curiouser and curiouser.

As Jordan Smith reports in this issue (see "Not Quite Fleet"), city officials have spent the last two weeks trying to get the egg off their faces over misinformation they released in response to Jordan's July 2 story (see "Kicking the Tires at Fleet"), which reported that they had spent the last two years mostly ignoring managerial and other problems called to their attention by an employee whistle-blower, Daniel Lomas. They could have saved themselves a good deal of embarrassment if they had simply talked to Jordan directly instead of releasing memos in response to her questions. So before Chief Financial Officer Leslie Browder reiterated (in yet another memo) that city officials hadn't known of the city's scrap tire pile illegally abandoned in Southeast Austin until Jordan started asking questions about it last November, Jordan would have been happy to provide (as we did last week) Lomas' Aug. 2, 2009, e-mail to City Manager Marc Ott laying out that matter, along with several other potentially criminal allegations involving Fleet personnel.

Turns out the city had lost the e-mail.

More precisely, Ott had responded briefly to Lomas ("If what you're saying is true those responsible will be held accountable") and forwarded the message to City Attorney David Smith, who turned it over to the Police Department. So far, so good, except that Smith apparently neglected to inform anybody else – meaning neither Browder (ultimately responsible for Fleet) nor Assistant City Attorney Lee Crawford nor even Ott himself (presumably attorney Smith's client) received the benefit of Smith's memory or knowledge or counsel when they tried to address these matters in November, or February, or July. Of course, by July, the city attorney was no longer employed by the city, having resigned in the wake of the KeyPoint Government Solutions report fiasco – which turned on Smith's decision that only he could determine who should read the critical KeyPoint report.

If this all sounds less like the behavior of a city attorney and more like that of a Mafia consigliere – whose job it is to make troublesome things disappear – draw your own conclusions. In considering Smith's habit of omertà, Crawford would only say that he's sure Smith believed he was acting "in the best interest of the city."

The current upshot is that Ott has recently sent two more memos to City Council trying to explain all this. His July 9 memo tries to clarify any confusion created by his July 2 memo, as well as Browder's Dec. 8, 2009, and June 29 memos. (Should you be so inclined, you can find the whole string on our website, posted herewith – Browder's June 29 contribution and Ott's latest effusion should bring you more or less up to date. Enjoy.)

Since impertinent questions by Jordan Smith and yours truly evoked Ott's somewhat annoyed responses (always glad to be of public service), I'll do my best to summarize the current situation. Ott insists that, over the past two years, "our staff has been working to investigate each and every allegation and take corrective action where we found deficiencies." He itemizes a list of "major actions" taken at Fleet in response to various problems – most of them called to the city's attention by Service Center Manager Lom­as; when Lomas initially raised them, beginning in early 2008, he was largely dismissed or ignored within Fleet. Indeed, as near as we can tell, no serious action was taken until Jordan's stories brought the scrap tire pile into public (and City Council) knowledge – those reverberations continue. The former tire program manager, Bill Janousek, has been dismissed, one or two others have been disciplined or reproved, a police investigation of the tire program (and related matters) continues, and the city recently commissioned an independent audit of Fleet.

We're all eager to learn the results of all this subsequent review.

Tale of the Tape

Ott's memo to council bristles a bit at the Chronicle's criticism of Fleet and its management, and that's fine – love from City Hall is not our reason for existence. But in echoing Browder, Ott also diminishes the importance of a "surreptitious recording" Lomas made of an Aug. 24, 2009, disciplinary meeting with Fleet managers, in which he again tried to inform them of serious problems with the tire program that he had first raised as early as May 2008. On the recording, Fleet Officer Gerry Calk firmly and repeatedly dismisses Lomas' legitimate concerns as overblown and inaccurate – Calk is grimly determined to keep the discussion focused on whether Lomas could manage to "disagree without being disagreeable."

Last week Calk acknowledged his mistake in not heeding Lomas' warnings, and Ott writes that Calk's inattention "has been addressed separately and appropriately with Mr. Calk." But Ott also repeats Browder and Crawford's mischaracterization of the recording, insisting that Lomas' report was "indirect and nonspecific" – I've listened to it, and in fact it's quite direct, specific, and even insistent. Ott also fails to acknowledge that by the time of that August 2009 meeting, Lomas had been trying in vain to get somebody at Fleet or City Hall to pay serious attention to these matters for nearly a year and a half. Indeed, three weeks earlier, in his Aug. 2, 2009, e-mail, Lomas had alerted Ott in detail to these serious allegations and had heard nothing since. As we learned last week, the information had officially disappeared into the black hole also known as David Smith. For all Lomas knew, this was the official management answer to his whistle-blowing: a disciplinary meeting with his supervisor.

Fleet managers and city officials may well have been stung by Lomas' "surreptitious recording" of his supervisors and his eventual transmittal of that recording to the Austin Police Department (after Browder and Crawford seemed largely uninterested). But by the time he spoke to Browder and Crawford (February 2010), Lomas had spent nearly two years trying to get city officials to take his information seriously, and until Jordan Smith reported it, what he had to show for it was a couple of disciplinary letters in his personnel file. Under the circumstances, it's understandable that he might want to document his official interactions.

No doubt the whole matter has been a nuisance for Fleet and city management. But it is indeed gratifying that City Manager Ott has declared his renewed determination to take "significant corrective actions" to make things right. I strongly suggest – however much it might discomfit the current chain of command – that he and CFO Browder consult with Daniel Lomas on the best ways to do that. 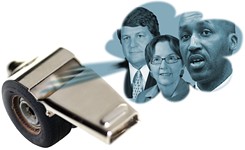 Kicking the Tires at Fleet
A city whistle-blower confirms that the trouble at Fleet Services has been much worse than neglected scrap tires and bad record-keeping. And nobody in charge wants to hear it.