MetroRail in Search of Riders 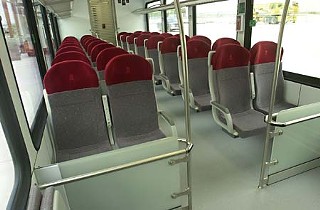 This train holds a lot of seating opportunities. Anyone want to take a comfy ride on the MetroRail? Anyone? (Photo by John Anderson)

After two years of delays and gaffes, the launch of the MetroRail Red Line was supposed to be good news for Capital Metro. Arguably, it's only made things worse. Disap­pointing ridership figures in the first months of operation have only given ammo to those who claim rail "Costs Too Much, Does Too Little," as was written on bumper stickers a decade ago. So Cap Metro is taking action: At the most recent board of directors meeting at the end of June, the transit agency's staff announced it will undertake a program of "ridership enhancement" to bring those numbers up.

The program is badly needed. Cap Metro had hoped for 1,700 to 2,000 boardings per day, a target that MetroRail easily exceeded in the first month due to two weeks of free fares and curious citizens. But ridership fell to 901 boardings per day in April and then fell again to 775 a day in May. (Bear in mind that most riders board twice a day, assuming they travel round-trip.)

Those numbers created an ugly financial picture for MetroRail: In the 2010 fiscal year budget, staff predicted that the subsidy per boarding (that is, the remaining cost picked up by the taxpayer after the rider has paid the fare) would be $17.44. That looks bad enough, considering the average bus subsidy is around $3.50 per trip. But the anemic ridership means the actual subsidy is currently $36.69 per one-way rider.

Cap Metro's attempt to attract more riders will be three-pronged: adjustments to service, marketing/outreach, and possibly lower fares. The first prong is already set to roll: A "rail connector" bus route from Kramer Station will be added as part of the regular August service change. "There are several major employers near Kramer (IBM, National Instruments, Domain to name a few), and there is a lot of interest among employees to ride rail and use Kramer," said Cap Metro spokesman Adam Shaivitz via e-mail.

"Our observation is that a lot of bicyclists were taking the train to Kramer," added Cap Metro interim CEO Doug Allen in a later interview. Presumably, they're cycling to get to jobs a little farther away than walking distance from the station. Cap Metro plans to make schedule changes that will align bus arrival times with train arrivals, and longer-term, it hopes to address what has easily been the biggest item in the suggestion box: running the train more often than just its current weekday, rush-hour-only service.

As for the other prongs, Allen said that in rail's early days back in March, "we didn't do hardly any marketing or outreach, because we wanted to make sure the system was working well and reliably. That has happened." Aside from last week's freight train derailment that caused the commuter train to cancel a morning of service, he said, "We've had a 99.7 percent on-time rate last month. So now it's a matter of marketing and having outreach to ... make sure people understand what their options are and how to use the system." The third prong – fares – is less defined at this point, but Shaivitz noted that the 31-day pass for rail is $7 higher than an express bus pass, so it's possible riders could be wooed from the buses over to the train. Ultimately, Cap Metro hopes to phase out some of the express buses in favor of the train – Allen said Cap Metro "cannot afford service that is duplicative," although some of the express buses from the suburbs might remain if they're "doing a different role" from the train.

There is an underlying problem with most of these solutions, however – how does Cap Metro pay for them? Since every transit trip is subsidized, then more service costs more money, something that has been in short supply lately. Allen said the initial Kramer connector is no problem – since the Down­town and MLK connectors have proven less popular than anticipated, some vehicles will be removed from those routes and shifted to Kramer. As for the rest, "We're going through the budget process now," Allen said. "We're preparing scenarios. We'll see if we can afford it. The cost to add midday service is about $300 per train hour." Allen speculated that perhaps two vehicles might perform those midday runs – according to the Chron­icle's calculations, that might cost $1 million per year to an agency with a projected $140 million 2011 fiscal year budget, most of which comes from sales taxes, which Allen said "are coming back to where we wanted" after being severely down the past couple of years.

Of course, a major criticism from the anti-rail crowd is that rail inevitably takes away services from other transit customers – and, in fact, Cap Metro trimmed bus and paratransit services while completing the Red Line in order to balance its budget. Will anything be cut to bring more rail? "I don't think so," Allen said. "I think it's a matter of seeing what all of our services are ... and where they all fit into our projected budget." 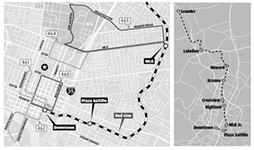 The Train! The Train!
What, where, when, and who on the Red Line