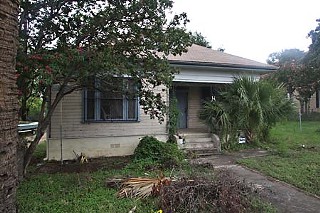 This old house at 1600 E. 11th is at the center of a proposed teardown dispute. (Photo by Jana Birchum)

Is it a priceless relic of Eastside history or a worthless money pit? That's the question at the heart of a historic-preservation controversy involving the 1917 Schmidt House at 1600 E. 11th. On March 25, the Catholic Diocese of Austin, which owns the property, petitioned the city to demolish the house. Deacon Ron Walker said the building "is in very poor condition" and not worth the expense of renovation, estimated between $125,000 and $200,000. But community members oppose the demolition, and the Blackshear Neighborhood Association has passed a resolution supporting historic zoning, also recommended by the city's historic preservation office. While the designation would provide a tax break and stop demolition, it would not compel renovation.

D'Ann Johnson, who has worked on the case for BNA, believes the vacant one-story, two-bedroom cottage is worthy of preserving for its architectural quality as well as its long and significant history. Walker disagrees: "It's not a historically significant site," he said. "It's just an old beat-up house." It's been altered so many times over the years, he said, that any architectural character was lost long ago.

The property, considered part of the nearby Holy Cross Catholic Church parish, has been the subject of many parish discussions, said Walker. "The pastor [the Rev. Michael Aje­wole], after consulting with all the groups, is of the opinion that the house really should be torn down," he said, adding: "The Holy Cross parish, the first African-American church in Austin, has remained a poor parish. They don't have the means to spend that kind of money on renovating an old house." The church has prominent members, including civic leader and former state Rep. Wil­hel­mina Delco, Texas NAACP President Gary Bledsoe, and Bledsoe's wife, Austin American-Statesman editorial writer Alberta Phillips. And some parishioners are in favor of preservation. "As much as I pray for complete unity, that doesn't seem to happen," said Walker.

The Historic Landmark Commission denied the demolition request in April and initiated a zoning change to historic single-family. The case goes back to the commission for possible final resolution July 26. "There's still a lot of discussion that could take place," said Walker.

According to the BNA and city staff, the property was once part of the German-American Ladies College campus. The house itself was built around 1917 for Victor R. and Ella Schmidt. (Walker questioned whether it's still the same house.) By 1943 the Missionary Sisters of the Immaculate Conception were using the house as a convent. The nuns worked at the nearby Holy Cross Hospital, the first integrated hospital in the South, where African-Americans were first allowed to have hospital births. Sister Celine Heitzman, the convent's mother superior and the physician at the 12-bed hospital, lived in the house. Heitzman was the first nun licensed to be a physician in the United States, Johnson said; she delivered more than 4,000 babies and had a racially mixed staff – a bold step in the 1940s. Later, the property was used as a rectory for Holy Cross' priests, who developed programs to serve the surrounding, mostly African-American community, including a school in the church basement and a program known as Holy Cross Colored Missions.

But the hospital was long ago demolished; the original church was lost to fire. So the house is the last standing connection to an important chapter in Eastside history, argues the Blackshear petition, especially given that so "many structures with important ties to this East Austin community have been lost through neglect, urban renewal, and demolition."

Walker says the diocese and parish are trying to improve the neighborhood: "We would like to use the property initially for a community garden, create meditation areas, a rosary garden – something very attractive for the community. ...

"I've seen some beautiful historic properties and dwellings," he added. "This is not one of them."