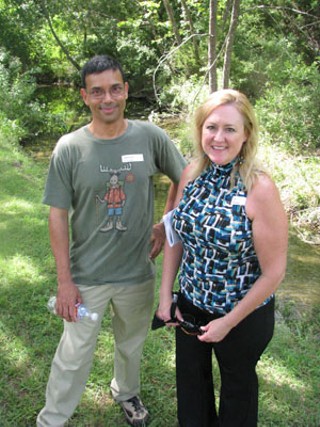 While Water Treatment Plant No. 4 construction continues as long as City Council's current majority in favor holds, new opposition is developing to the controversial plant in neighborhoods that will bear the brunt of burrowing out the plant's transmission lines. The Spicewood Springs Road Tunnel Coalition has formed not to reignite debate over the plant's merits but to question the city's wisdom in drilling its Jollyville shaft site.

Designed to ultimately process 300 million gallons of water a day, the plant, to be situated along FM 620 just south of Bullick Hollow in Northwest Austin, requires transmission mains and storage tanks; the Forest Ridge storage tank will be located in the Balcones Canyonlands Preserve, the Jollyville storage tank north of the preserve at Highway 183 and McNeil Drive.

However, deep shafts are needed for excavators to build underground transmission lines from the plant to the tanks. For the Jollyville tank, Austin Water has proposed a shaft site southwest of the tank, on a triangular plot of parkland where Spicewood Springs merges with Old Lampasas Trail and residential development skirts up against the preserve. The SSRTC members are fearful that construction of the shaft – which could be as large as 50 feet in diameter and 100 feet deep and in progress for three years – will be a danger and a blight to their neighborhood.

A proposed transmission line from WTP4 to the Jollyville storage tank has Spicewood Springs neighbors nervous.

Austin Water maps show the plans for the parkland (sold to the city by Spicewood neighbor Joe Wheeler): a working shaft, a crane, steel pipes, temporary offices, and more. The SSRTC argues that that's too much construction for the tiny tract. "The crane literally doesn't fit on the site," says Jill Rowe, a commercial real estate developer who's become the de facto voice of the neighborhood group.

Safety issues – such as estimated tens of thousands of dump-truck trips down Spice­wood Springs (which has a bike lane) and the possibility of fencing around the work site obscuring oncoming traffic from drivers – also concern neighbors, along with its impact on classes at neighboring Canyon Vista Middle School and general noise pollution from the project. "The way sound carries through the canyon here," says Rowe, "it basically takes our whole parks system for a three-year period."

Aside from quality-of-life issues, the group's argument is twofold. First, the group sees the project as a "major impact facility," defined by the city's Neighborhood Planning Guide to Land Use Standards as a site that may "serve community and regional needs but have significant impacts on the surrounding area that require special location and compatibility considerations," and therefore should be located "away from established or planned residential areas." Examples of these projects include "major utility production or treatment facility" and "large-scale mining and resource extraction activities." They highlight the difference between the Jollyville shaft and other shaft sites, like the Lamar shaft Downtown, next to the decommissioned Green Water Treatment Plant, to argue that only theirs would uniquely impact residential neighborhoods.

A secondary argument, familiar to longtime observers of the WTP4 debate, is whether the plan meets standards laid out under Chapter 26 of the Texas Parks and Wildlife Code. The same argument arose when the city attempted to move WTP4 to an alternate site (see "To the Lighthouse," Feb. 23, 2007); Chapter 26 allows for construction projects on parkland provided "there is no feasible and prudent alternative to the use or taking of such land."

To that end, a Chapter 26 hearing will come before City Council after its summer hiatus, and Spicewood Springs neighbors are hoping to show that alternatives exist, even if Austin Water doesn't agree. "Keep them on the highways," says Rowe, proposing trenched tunnels along FM 620 – the highway where the plant is located – and possibly Highway 183. Also worth consideration is that while WTP4 is designed ultimately to process 300 million gallons per day, it's being built incrementally – raising the possibility that the Forest Ridge main may be enough to deliver the plant's initial water. "This is shoddy, and on an artificially rushed schedule," reads a presentation prepared by the SSRTC. "This needs to be slowed down and done right."

Larger questions still loom over WTP4 – whether the city truly needs the extra capacity and if construction of the plant aligns with long-term conservation goals. Additionally, the plotting of the transmission lines hasn't yet been formally approved, despite the utility's separate "proposals" for the Jollyville line overlapping substantially. "By starting to build the plant site, they're locking in the fact they have to get the water from point A to point B," says Bill Bunch, Save Our Springs Alliance director and outspoken WTP4 opponent. While Rowe may agree with that statement, she's expressly neutral on the merits of the plant itself – she just thinks the shaft sites and the transmission lines they serve could be better planned.