Don't Go Into the Light

It's time to lighten the load of light pollution

If you're trying to find the University of Texas McDonald Observatory from space, it's the thing that's not there. Rebecca John­son, the observatory's press officer, explained, "If you look at a picture of the globe at night and you look where the observatory is, it's just a black spot." However, much of the rest of Texas, the U.S., and the northern hemisphere is afflicted with light pollution. That's the ambient glow in the night sky from streetlights, billboards, and building lights that just shine into the sky, illuminating nothing. Now staff at UT are working to teach Texans that light pollution isn't just a nuisance to stargazers but a pervasive problem with real health impacts.

UT's astronomers have been aware of the problem for years, but through July 4 they're highlighting the issue in their two nationally syndicated radio shows (the English-language StarDate and the Span­ish-language Universo). There's also a new video highlighting the issue available on the observatory's website, and discussions of light pollution will become a key part of presentations to visitors to the West Texas facility. With new funding from a grant from Premack Law Office of San Antonio, Johnson said, "We're trying to spread that word out even more."

Light pollution is a problem with simple solutions. The technology – from light fittings with reflective shields to low-voltage motion sensors and LED lighting – is commonly available and improving every year. Rowena Evans, editor of the International Dark-Sky Association's Nightscape magazine, said it's the only form of pollution that can disappear with a flick of a switch: All it takes is better planning and retrofitting of old fixtures. "We don't want to turn off the lights," said Evans, "just to make you think about how you're going to light."

For the McDonald Observatory, it's a simple equation: The more glow in the atmosphere, the tougher it is to see the stars. That's why the facility was built out in a remote part of West Texas in the first place, far from any streetlights. The observatory's light pollution expert Bill Wren said, "It's the darkest spot left for a North American observatory, and it's my job to try to keep it that way."

Yet light pollution isn't just a problem for rural stargazers: It has a serious impact on the urban environment as well. Evans said, "While it's not as immediately threatening as the Gulf oil spill, at the same time there is this steady encroachment and it's becoming an issue to a lot of people." It has been shown to affect migratory patterns for birds, damage the breeding cycles of certain species of frogs and sea turtles, and cause insects to swarm in unnatural cycles. There are also severe concerns about the effect on humans: In 2009, the American Medical Association passed Resolution 516, which cites the disruption to sleep patterns caused by excessive nighttime lighting, and that disruption has been linked to depressed immune systems and increased rates of certain cancers. There's even a cultural impact. Evans said, "When you think about how much of human history – creation myths, navigation, the desire to put things in space – has been inspired by the starry night – now, for the first time, children are growing up without seeing that."

More insidious than the visible light pollution may be the invisible emissions from power plants burning fossil fuels to light empty sky. According to the International Dark-Sky Association, 22% of all energy produced in the U.S. goes toward lighting. Even just reducing the light pollution from the 1.8% of all U.S.-produced electricity that goes toward public outdoor illumination would have a measurable impact on pollution and costs. When he lays the case out, he said, "suddenly the cash registers start kerchunking."

He's worked with neighboring communities like Marfa and Alpine to pass ordinances and work on building codes to encourage the use of nonpolluting fixtures. That helps keep the McDonald competitive for research with facilities like Chile's La Silla Paranal Obser­va­tory and Hawaii's Mauna Kea complex, and the resultant ecotourism dollars make the ordinances "a soft sell for the local community," Wren said.

Texas does have some light pollution legislation, but it is gappy at best. Similarly, the city of Austin has introduced building guidelines to help reduce light pollution – but there are some big offenders in Downtown Austin, including the state Capitol and even UT itself, with the floodlights at the stadiums, Intra­mur­al Fields, and UT Tower causing a glow in the night sky. Encouraging big urban centers to work on light pollution has been part of Wren's job for more than a decade: He's worked with communities as far away from McDonald as Midland and El Paso, showing them the ease and benefits of cutting down on wasted light. "I don't dwell on the bad lighting; I show people the good fixtures," he said. "Tens of billions of dollars in light going up into the night skies does nobody any good." 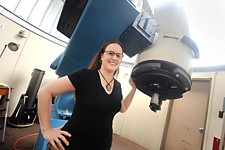 The Lights of Texas Are Upon UT
What is UT doing about its light pollution?