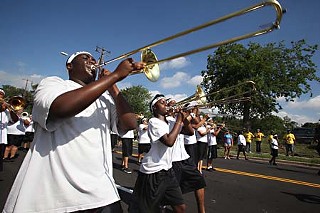 The trombone section strikes the right note in the Austin All-Star Band, performing in the Juneteenth Historical Parade on Sunday. (Photo by Jana Birchum)

Council Preview: Storm Before the Calm

MRF madness isn't the only City Council malady: Today's meeting (Thursday, June 24) being council's last until July 29, council convenes to a 152-item agenda. Notable items from council call for a financial analysis of a possible November 2012 comprehensive bond package bundling traditional capital improvement projects with an urban rail election (Item 88) and adding an item to the same ballot that would make the city attorney report to council instead of the city manager (Item 78). Additionally, morning briefings are scheduled on the proposed 2010 transportation bond package (see "City Announces 'Multimodal' Bond Package"), a recommended urban rail system plan (thought to address intercity travel across Central Texas), and the Downtown Bike Boulevard. Item 83 takes another shot at creating Mobile Loaves and Fishes' Habitat on Wheels, this time potentially placing the housing for the homeless on airport land. Items 77 and 84 both potentially boost small businesses, the former calling on a city manager report to facilitate their growth, the latter initiating for a work-force development program to incorporate classroom learning and on-the-job training in small businesses. Item 87, responding to demands from the Workers Defense Project, will develop an ordinance requiring rest breaks and drinking water for construction workers. – W.D. 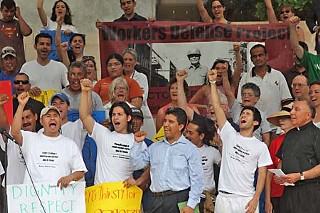 The Workers Defense Project rallied June 18 at City Hall on behalf of construction workers toiling in soaring temperatures – often for extended periods without breaks. The City Council is expected to consider a resolution today (Thursday, June 24) calling for an ordinance that would require water and rest breaks for workers at construction sites. (Photo by Jana Birchum)

Gov. Rick Perry may have hoped that this week's trip to Asia touting Texas investment opportunities would boost his re-election chances. Instead, Democratic challenger Bill White has taken advantage of the governor's globe-trotting to dominate headlines and paint Perry as an absentee landlord. On June 17, former Houston Mayor White gave the press Perry's appointment book for the first five months of the year; dubbing the governor "Part Time Perry," White's campaign claims that Perry worked an average of seven hours a week and had no scheduled state business on 38 out of 106 business days. Perry is already on shaky political ground; his refusal to debate White has drawn ridicule from Dems and the press corps, and even the mild-mannered Evan Smith, CEO of the Texas Tribune, has called it "crap." The end result may be seen in the latest polling: On June 22, Public Policy Polling released numbers showing that, if November's election were held today, Perry and White would be tied at 43%. What's worrying for Perry is the political consensus that any incumbent under 50% is in trouble. – Richard Whittaker

The Food and Drug Admin­i­stration's Reproductive Health Drugs Advisory Committee voted unanimously June 17 to recommend approval of a new emergency contraceptive, ulipristal acetate, made by the French company HRA Pharma under the name EllaOne. Ulipristal acetate works to delay ovulation and is effective up to five days after unprotected sex. Cecile Richards, president of Planned Parenthood Federation of America, called the decision a "commonsense recommendation" that would provide women with options to avoid unwanted pregnancy. "There are many reasons why a woman may face the risk of unintended pregnancy ... and every woman deserves every option available" to prevent that from happening, she said in a press statement. The FDA is not bound by the recommendation but seems likely to approve the pill, which is already being sold in 22 European countries. Also last week, the Reproductive Health Drugs committee put the kibosh on another pill for women called flibanserin, touted as a female Viagra by the German company that makes it. The advisory group concluded that the pill didn't work much better than a placebo and that there were too many side effects – including depression, dizziness, and fatigue. – Jordan Smith