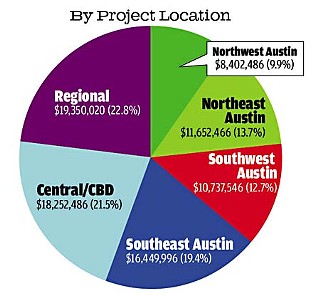 "Balanced," "balanced," "balanced." That was the mantra repeated by city officials last week to characterize the proposed list of transportation projects for a likely $85 million November bond referendum. Unveiling an initial project list June 14, City Manager Marc Ott said, "This bond package represents a balanced approach to improving mobility and connectivity – via roads, bicycle paths, trails, sidewalks, and transit infrastructure." Mayor Lee Leffingwell echoed Ott the next day, saying, "I think overall it's a well-balanced package." Council members used similar language. Even the chair of the business community's Take On Traffic coalition, Brandon Janes, praised the balance for leaving road warriors and transit advocates equally dissatisfied: "The fact that everybody's a little unhappy about it is a good sign that they made it fair and juggled it as well as they could."

More juggling will follow. On June 24, staff will brief council on the proposed project list, which then goes to the Transportation Bond Citizen Task Force (June 28 and July 12) and to the Comprehensive Plan Citi­zens Advisory Task Force and Trans­por­ta­tion Commission (both July 26) for community reviews. After final tweaking, the city manager's final recommendation goes before council July 29. In early August, council will make a final decision on calling a Nov. 2 referendum – although council members already are expressing confidence it will happen.

What's most notable isn't any one project, or even the 50-50 spending split between roads and other transportation modes – it's the rigor and transparency of the process. Two years ago, the city established a Transportation Department, which embarked on a strategic mobility plan (with a regional scope), engaged national transportation consulting expertise, and gathered community and professional input. As Janes and Leffingwell both noted, that process has yielded a list of projects that jibe with larger community values – not just getting drivers from point A to point B. The preliminary recommended 2010 Transportation Bond Package scoring matrix (online, with a wealth of other information, at www.austinstrategicmobility.com) assigned points according to eight values: mobility choices, efficiency, sustainable growth, regional integration, environmental stewardship, investment and economic development, neighborhood coordination and connectivity, and safety.

As a result, the project list looks different from past proposals, which have been road-heavy but often vague in detail. "This represents a real shift in policy, toward more specificity in naming the projects," Leffingwell noted. "That's more difficult, but it's the way to go." Voters will know exactly what the bonds would fund – with many specific projects listed by name, mode, location, and costs.

The package is modest– $85 million just doesn't buy a lot in the transportation world – and it will require no new taxes to pay off the bonds. "It's small deliberately; we do want to preserve as much of our bonding capacity as possible," Leffingwell observed.

Also last week, the mayor announced that he and Laura Morrison will be co-sponsoring Sheryl Cole's June 24 resolution to hold a comprehensive bond package in 2012. (That dais coalition suggests broad council support to replace the scattered series of bond elections initially proposed for 2010 through 2013.) The 2012 referendum is expected to include a first Downtown phase of rail transit, as well as the construction of road projects whose initial planning, design, or engineering are in the 2010 package. Those include congestion relief on US 183, MoPac, and I-35, as well as "complete streets" improvements to corridors all around town – Airport Boule­vard, East Riverside, East MLK, the Waller Creek district – and to neighborhood streets that need reconstruction.

The mayor's office immediately heard some criticism that projects like the Lady Bird Lake boardwalk, neighborhood sidewalks, and trails are "amenities," not "congestion relief." But Janes noted that the big fixes for regional congestion simply are too expensive for this go-round: "Just doing the Y at Oak Hill is $600 million in itself." Janes said the initial reaction from Greater Austin Chamber of Commerce and Take On Traffic members has been positive. 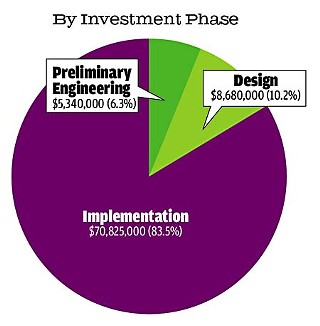 Transportation Department Director Rob Spillar emphasized that the package does include relatively affordable, immediate relief for Austin's most congested major roads. Many of the needs identified, while not appropriate for bond funding, will be pursued with other funds – notably, an initial estimate of $2 million to be invested in partnering with the Texas Department of Transportation on a long-term I-35 solution.

See the complete bond proposal and supporting information at www.austinstrategicmobility.com. 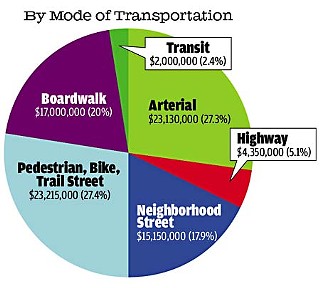