Neither Side Pleased With Historic Zoning Changes 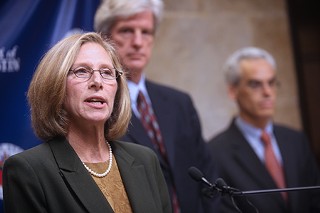 The biggest divide in the historic landmark zoning debate, entertained by City Council last week, was whether re-examining the criteria used to grant landmark status – and its concurrent tax breaks – was a bug or a feature.

Preservation proponent Laura Morrison ultimately fought a losing battle, offering an unsuccessful amendment to narrow the resolution before council to the ultimately adopted limitations on historic landmark nominations: three per month, with a one-nomination limit from any given National Register district or local historic district, to reduce the number of landmarks in one neighborhood. The changes will be implemented while the city develops recommendations for a fixed cap on property tax exemptions.

The changes, designed to address widely perceived problems with the city's generous tax abatement program for historic landmarks (see "What's Historic?," Feb. 26), brought out speakers on opposite ends of the spectrum but seemingly satisfied neither camp. Mandy Dealey of the Heritage Society of Austin sounded notes of caution: "We do not oppose the adoption of interim measures while ... a review is being conducted," she said, "but cannot support" limits on the Historic Landmark Com­mis­sion to initiate cases, as the item does. Citing preservation's "significant economic benefits to our city as well as a vital component to our quality of life," Dealey called for a study of the economic benefits of historic preservation (which was included in the resolution), for facilitation of more local historic districts, and for council to "respond to the specious misinformation being propagated" about historic landmark zoning's cost. 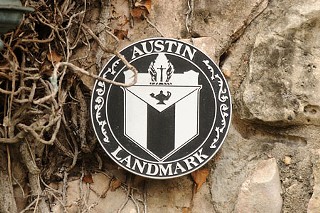 Those speaking in opposition to the program – chiefly ChangeAustin's Brian Rod­gers – were similarly dissatisfied with what they saw as half-measures. In his signature fashion, Rodgers spoke of "a gold rush" on his street among neighbors interested in tax breaks, not historic preservation. Showing a slide of a tony Enfield-area mansion listed for $5.9 million, Rodgers said, "This guy takes the cake – literally, the cake, the silverware, the china – $45,000 annually forever," referring to the homeowner's abatement (which can indeed last in perpetuity, though properties must be inspected yearly to ensure they still live up to the city's historic standards).

Rodgers called for a blanket moratorium for "a few months," pointing out that while the city ultimately designates what's historic, it isn't the only jurisdiction affected: "If Aus­tin is a poor gatekeeper ... then AISD, ACC, Travis County all suffer needless tax loss."

"Come election time," he continued, "somebody is going to run ads saying Mayor, Council Member Blank – insert your name here – voted 50 times to give these wealthy homeowners giant tax breaks. ... So if you think Jennifer Kim's Vera Wang stemware played well to the populace, you can imagine how this will burn down a campaign."

When it came time for council action, Mor­rison tried to strike language calling for new recommendations regarding "the historic property identification and designation process." She cited concerns with "opening up the process willy-nilly," due to the protracted public process that led to the current guidelines. She also tried to add a directive requiring the city work with the Historic Landmark Commission and other stakeholders to encourage preservation in all historically significant areas of town. The proposal didn't find traction, and Morrison began warning of the resources a revision might cost the city, pointedly inquiring what would be the cost of "staff time for a task force that could take a year and a half." But others felt a re-examination was warranted: Randi Shade, contradicting Mor­rison's fears of reopening the process, said, "After hearing what we've heard today, I'm comfortable [with that]."

Bill Spelman then offered an amendment to Shade's substitute motion to pass the original resolution that would examine the historic landmark process in peer U.S. cities. Co-sponsor Mike Martinez chimed in, noting that while "we may not be achieving everything both sides want, [this process] is a start, not the end." With that, the original motion passed 5-2, Morrison and Sheryl Cole dissenting.