No Discs, No Pease 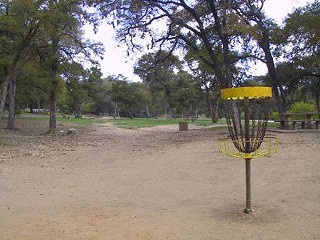 A city report points to "trampling and soil compaction" in the area surrounding this disc golf basket at Pease Park. (Courtesy of Austin Parks and Recreation Department)

It was a sad day for local disc golfers when, in early June, the city of Austin announced the eventual shutdown of the course at Pease Park, along Lamar Boule­vard. A favorite of disc golfers for years, the course and its surrounding park have suffered visibly from the constant traffic and play of the disc golfers, the impact of the park's other patrons, assaults by Mother Nature, and a lack of city resources to adequately fund proper maintenance. While the disc golfers have been hoping to work with the city to redesign the course at Pease and save it, this week that does not seem likely.

Asked if the city will reconsider closing the Pease course, Parks and Recreation Depart­ment Director Sara Hensley said: "No, not really ... because I'm not going to shut it down until we have an alternative course. I want to make sure the disc golfers have another course that is just as good, if not better than Pease. I'm not going to do anything until I know another course is up and running – and I mean a brand-new course."

Hensley added that the city would like to work with the disc golf community to make the changeover as painless as possible. The most likely location for the new course, she said, would be at the Roy G. Guerrero Colo­rado River Park, west of Airport Boulevard and south of Cesar Chavez, near the 183 interchange. But the course would not take away any of the land currently in use at the park. "This is an additional piece that's next door to it. I don't want people to get the impression that we're taking away a piece of property that had already been master-planned," Hensley said.

The new facility would be a stand-alone course and not part of a multiuse park. Lou Moreno of the Waterloo Disc Golf Club commented, "There are some players – especially people with families, couples, people with kids – that feel more comfortable in a multiuse park as opposed to being isolated." Moreno did concede that Guerrero "is a good option, but there still is a need for disc golf in more Central Austin." He listed Hancock Park as one location that is suitable and easily accessible for players, especially those without cars. For their part, Austin's disc golfers have amassed thousands of volunteer hours working on improvements at Pease during their 20-plus-year history with the park.

Hensley stressed the advantages in locating the new course at Guerrero. "The reason we selected that area by Roy G. was that it was on the bus line, that it was an area that was not heavily treed, and had more open areas but some trees where you could work around it like we did at Slaughter Creek Park that worked so well – and truthfully, if you want to look at how to do a disc golf course, the best ones to look at are the ones that our disc golf friends helped us build at Slaughter Creek and Mary Moore Sea­right. And those were both done in conjunction with disc golf groups who helped us put it together and do it right."

Hensley is quick to point out that there are many usage and wear issues at Pease, not just those related to disc golf. "There was a study conducted by the Lady Bird Johnson Wildflower Center on Pease Park as a whole, and it's not just disc golfers ... but it is a sport that has taken a toll on the park. But just as well has the weather ... and then of course our lack of maintenance, quite frankly. And it's not our staff's fault," she added. "It's the lack of resources."

"The problem is we've lost a lot of trees, and we're wanting to go in and plant new trees. But we can't go in and plant a bunch of trees when you're throwing that disc in the middle of the trees. So what we want to do is give Pease Park a chance ... and to really try to get the park back to its beautiful state. If you look at a map or picture of this park back when we received this park [from] Gov. Pease, it was a beautiful, lush park. And now the foliage, if you take an aerial shot of it, we've lost a lot of our foliage, and not just from disc golf.

"There's two things, that is one. The fact is that we've gotta bring the park back. And two, this is also in anticipation [of a] major undertaking of a watershed project there, and it doesn't start until next year. What we wanted to do was let the park rest a bit before they come in and start staging equipment. And they'll be taking out a handful or more of those disc golf sites anyway for this yearlong construction."

The closure of the course at Pease Park is certainly a blow, but there is hope that the city and the disc golf community can work together to build a brand-new course almost as accessible as Pease. To help make that happen, there will be a stakeholders meeting Thursday, June 17, at 6:30pm at the Lamar Senior Activity Center (2874 Shoal Crest) on the Existing Conditions of Pease Park and Shoal Creek Greenbelt.