Wrap-up of 2010 Pride and QueerBomb festivities 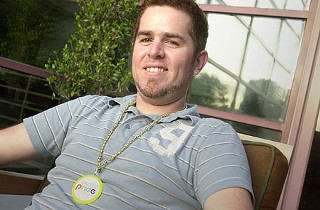 When Chad Peevy became president of the Austin Gay and Lesbian Chamber of Commerce in 2009, he told the Chronicle he was working to build "a sense of community that is inclusive." In the wake of this year's chamber-led Pride festival on June 5, which saw a large portion of the LGBT community mount a parallel parade and celebration under the QueerBomb banner, major questions remain about how successful this new "inclusive" Pride really was. 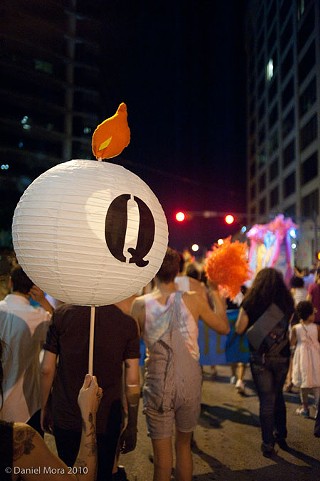 QueerBomb marches to its own beat. (Photo by Daniel Mora)

QueerBomb's event is estimated to have attracted around 1,000 attendees. A presentation on attendance and revenue at the Pride events was made to the chamber's Austin Gay and Lesbian Pride Foundation board on June 15. After initially promising to brief the Chronicle on the numbers, board members said that they had decided to leave all media inquiries to Peevy, who had not returned several requests for an interview by press time. One person awaiting the results with more interest than most is former AGLCC President Jimmy Flan­nigan, who was unceremoniously sacked by the chamber two days after last year's Pride fest (see "AGLCC Ousts President in Pride's Wake," June 12, 2009). Flannigan said he had deliberately withdrawn from all community activism over the last year. "My presence would have been challenging," he said, "just because of what the chamber was doing with Pride. They were everywhere." If he had been involved at any level with any group, he felt he could have been blamed for any failures by the chamber. Hard as it was to withdraw from activism after a decade, he said, "I needed them to fail on their own, and I knew they would, and then they did."

The existence of QueerBomb reflects social divides within the LGBT community, with the chamber going so far as to cancel contracts with performers they thought might be supportive of QueerBomb (see "Split Pride: Gay Event Plans Marred by Tension," June 4), so the big saving grace for the chamber may have to be the money. On April 8, council passed a resolution making Austin Pride an official annual city co-sponsored event, meaning a permanent waiver of all city fees (previously those fees had been waived by individual council actions). The resolution cited an AGLCC estimate of 45,000 attendees and that the event contributes between $1.5 million and $2.5 million to the economy. An earlier draft had incorrectly claimed that this calculation came from the Austin Convention & Visitors Bureau, but that was amended before council took action. (According to former chamber board member Ceci Gratias, no formal economic impact study has ever been done.) Complicating the calculations was the fact that in previous years Pride had generally coincided with other major local events, such as the Republic of Texas Biker Rally, making it very difficult to separate which tourist dollars were attributable to each event. As for the AGLCC estimate, Gratias said, "I don't know where they got the numbers from." 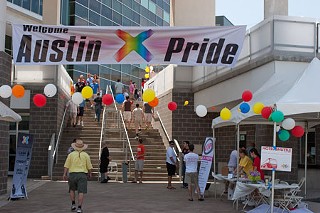 Austin Pride participants get the party started at the Long Center. (Photo by Logan Youree)

The AGLCC assumed sole responsibility for Pride last year, and the cost and scale of the two Pride events it organized are very different. Last year, the Pride festival was held at Republic Park Square, admission was $5, and the city waived all fees for the festival and the Pride parade. This year, while the city once again waived all fees for the street events, the festival moved to the Long Center and admission was $10. To reflect the family-friendly tone sought by the chamber, there were more all-ages events – others, such as the 4th Street Block Party, were restricted to those age 21 and older.

Along with ticket prices, rates for vendor booths were higher than last year. Due to changes in location and rental terms, Gratias said, "It's not an apples-to-apples comparison," but booth costs increased while the number of complimentary volunteer passes dropped from five per vendor in 2009 to two in 2010. For a small nonprofit to have the same space and staff as last year, she said, "I started looking at the numbers, and it would cost about 160 bucks more."

How the final balance sheet works out may provide a long-overdue context to Flannigan's removal in 2009. The chamber initially announced that he had resigned. The chamber issued a press release to that effect on June 9, 2009, saying that Flannigan had "stepped down" but were forced to retract it after the outgoing president publicly refuted the claim. After Flannigan's firing, Peevy told the Chronicle, "That press release was issued in hopes of saving face for Jimmy." "They lied," said Flannigan, adding that he is still looking for a definitive reason for his firing. When the board removed him, he said, he was "told repeatedly that it wasn't about Pride." However, at the time, the board publicly justified his firing because of complaints from vendors and a lack of planning. Last year, Peevy told the Chronicle, "Pride cost $75,000 to put on, and what people don't know is that we went into that nearly $40,000 shy." He blamed that financial exposure on Flanni­gan's unilateral decisions and said that was why the decision was made to remove him early. But Flannigan, who was term-limited as president to the end of 2010, said the board acted preemptively. Conflicts with groups within the community were already apparent, and Flannigan said that board members told him they were concerned he might ask for their resignations over those tensions. He added: "[They were] right. I would have asked them to leave."