Our Bodies, Our Cars

The links between urban design and public health 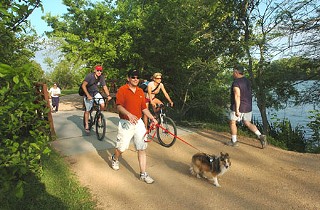 Do you know why these people look healthy and happy? Because they're not sitting in their cars. (Photo by John Anderson)

That blunt assertion, by keynote speaker Lawrence Frank, captured the nut of the argument at New Urbanism: Rx for Healthy Places, the 18th national conference of the Congress for the New Urbanism. Held in Atlanta May 19-22, CNU 18 was co-organized with the national Centers for Disease Control and Pre­ven­tion. Both organizations address public health through the design of the built environment, as well as human-powered transportation. National experts spoke to about 1,300 attendees – including a dozen or so from Aus­­tin – about how walkable, bikable compact communities encourage healthy lifestyles, where physical activity is part of everyday life. Participants considered how compact traditional neighborhoods and communities, where residents can walk to a corner store and have only a short commute (e.g., the kind of places where most presuburbia Americans lived), can reduce obesity, diabetes, asthma, cancer, and national health care costs.

Frank, a professor of sustainable trans­por­ta­tion at the University of British Columbia, spoke alongside his co-authors of the book Urban Sprawl and Public Health: Designing, Planning, and Building for Healthy Communities – physician Howard Frumkin, who established and now leads the CDC's Healthy Community Design initia­tive, and Richard Jack­son, chair of Environmental Health Sciences at UCLA's School of Public Health – on the message, "Everything is connected with everything." Frumkin said 37 states now have "no child left inside" programs to encourage young people to get outdoors and exercise. Unfor­tun­ately, in cities with polluted air (like Austin on Ozone Watch days), health risks from air pollution can increase with outdoor activities. The Environmental Protection Agency warns that young children, especially those with asthma, shouldn't exercise outside when ozone levels are high, and the risks rise with exposure to particulate matter, as occurs immediately adjacent to highways. (So, for example, should Austin be investing in a Waller Creek hike-and-bike trail in the shadow of I-35?)

Presenters cited data showing a clear association, although not always causation, between development patterns, transportation patterns, and public health. Frumkin described the CDC's recent work on encouraging walking to public transit stops and schools and discouraging car-based sprawl as a national health initiative. "The growing partnership between health professionals and those in design, planning, and architecture," he said, "reflects our many shared goals and the many synergies between our two worlds."

Traffic fatalities are the leading cause of death for America's young people between the ages of 3 and 33 – by reducing vehicle miles traveled, we might well save lives. For example, Frumkin said, if the whole country had proportionately as few car-crash deaths as transit-rich Portland, Ore., the U.S. could save 15,000 lives a year. By contrast, the car-crash rate of sprawling Atlanta, nationally extrapolated, yields 15,000 additional deaths.

Frank advocates improving public health by designing streets in old-fashioned networks, with lots of intersections that invite biking, walking, and short neighborhood trips, that are more efficient than systems based on highways, collectors, and arterials. (See his slide show at www.cnu.org/node/3220.)

Research also reflects that transit users walk more. CDC research in Atlanta showed that transit users are 3.4 times more likely than car commuters to get the recommended 30 minutes a day of physical activity. Higher residential density, commercial density, mixed-use development, and neighborhood street networks each statistically correlate, to some degree, with increased walking by adults (often to and from transit stops) and by children (to school). Based on these findings, Frank advocates that all governmental transportation investments consider health as well as environmental outcomes, including likely health care costs. He specifically lauded a federal effort to link health, transportation, economic, and job growth issues. "Frame it in terms of broad goals that work across what a lot of different people care about," he said, with a note of encouragement to professionals to work "across silos," or outside their areas of specialization: "If you're not working outside your comfort zone much of the time, you're not being brave enough."

Even the senior advocacy group AARP joined the New Urbanist cause. The AARP endorses the concept of traditional neighborhoods and "livable communities" – with places to shop for those who can't drive and opportunities to socialize ­– because they reduce stress and isolation among the elderly. And the American Cancer Society was on hand to disseminate research findings on the link between sedentary lifestyles and various health problems, including obesity.

Frank and a number of other speakers noted that reducing auto dependency will improve public health by improving air quality, pointing to significant cuts in air emissions – and pollution-related disease – achievable by reducing the number and distance of commuting trips. Jackson also argued for informed transportation and development patterns as weapons to fight the U.S. asthma epidemic, diabetes (the disease has doubled in the last 10 years, he said), and obesity, while protecting the environment and the climate. Public policy that gets people out of their cars does it all, as he put it: "The Clean Air Act meets the obesity epidemic." With 20% of federal spending now devoted to health care costs and threats from unaddressed global warming imminent, he said, "the urgency of the issues we're looking at is dramatic." 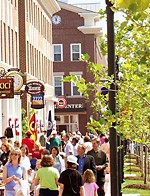 Compact, Climate-Friendly, Competitive
To restart the economy while saving the planet, the Congress for the New Urbanism advocates traditional neighborhoods for all

Congress for the New Urbanism, CNU18, Centers for Disease Control