New hike-and-bike trail on the horizon 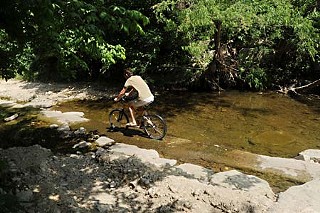 A bicyclist navigates a missing segment of the Shoal Creek Trail between Third and Fifth streets. (Photo by John Anderson)

"I'm so excited about all the trails that are gonna bloom in this city over the next two years," says Annick Beaudet, manager of the city of Austin's Bicycle Program. That's one good floral metaphor. Another is that Beaudet's aggressive tenure at the helm of the two-wheeler department is really starting to bear fruit since she took over in 2006.

We detailed much of that story earlier this year in "New Bike City" (March 12), and since then, more pedal projects are coming together: the South and North Walnut Creek Trails, a proposed Austin-to-Manor Trail, and – after too many years – a full connection of the Shoal Creek Trail between Third and Fifth streets. Those projects are currently in differing stages, ranging from planning to actual construction (see map, below). The Walnut Creek Trail will pick up in East Austin at Govalle Park (giving it easy access down Shady Lane to the Lance Armstrong Bikeway) and run in a broad arc east of Highway 183, through Northeast Park, into north Austin through Walnut Creek Metropolitan Park, and ending west of MoPac.

The Austin-to-Manor Trail is a collaboration with Capital Metro – the project, primarily under the auspices of the city, would connect with the South Walnut Creek Trail at Johnny Morris Road and Daffan Lane, run north through Walter E. Long Park, and then head east in the right-of-way of the rail tracks on which Cap Metro hopes to someday build commuter rail to Elgin. It would end at Ben E. Fisher Park at Manor's city limits.

While construction has already begun on North Walnut Creek, funding (as usual) is an obstacle for the Manor trail. "We only have enough funding to construct half of it," says Beaudet, "which is from the corner of Johnny Morris and Daffan to the corner of Decker and Lindell. We have $2 million of funding, which is a congressional earmark with a match. It's about a million dollars a mile to construct these things. We'll be seeking further stimulus grants and what-have-you aggressively to fund the other part. But the really nice thing in this era of 'shovel-ready' ... we're going to go through full design with this funding, and we'll have a shovel-ready design and we're hopeful we'll find a source of funding. I'm really excited about this really, really long section."

Three major trail projects are in various stages of coming together, ranging from planning to actual construction.

As for the Shoal Creek Trail, that's actually being driven by the Parks and Recreation Department rather than Beaudet. The segment of the trail between Third and Fifth has never had a full connection, requiring cyclists to push their bikes across the rocky creek bed. But it was made even worse in the early 1990s when flooding damaged what little trail infrastructure did exist there, making getting up out of the bed and onto the final stretch toward Lady Bird Lake difficult at best.

City staff says the desire to have an unbroken trail connecting all the way through along the west bank of the creek was hampered for years by a property owner who simply wasn't interested, combined with (you guessed it) lack of funding. Now, the property is co-owned by developers Larry Warshaw and Perry Lorenz, who are more amenable to working with the city, and some money is available from 2006 bonds. "The property owner now is very willing to grant us an easement for now, and then with the possibility of dedicating that once he develops that piece of property," says PARD's Ricardo Soliz. "And once he develops it, that portion would be deeded to us." The property is now being used as industrial/warehouse space. It has not been determined yet how Warshaw will redevelop, but it would likely become either commercial/office or residential.

Money availability will also determine the quality of the project. "We've recently hired an engineering firm to do a feasibility study for us, preliminary engineering to see what our options are," says Soliz. "They've come up with three different options – one as little as $200,000 to $300,000, all the way up to a million dollars. ... I think the idea that being contiguous should be our first priority and then see how we can fund the most expensive one."

"Our company, we develop projects Downtown and understand the importance of walkability, trails, and the importance of both Shoal Creek and Waller Creek, and we feel that having an attractive, usable trail there is not just beneficial for Downtown but for our project as well," says Warshaw. "[Council Member] Chris Riley approached us about this, and it's just the kind of thing we'd typically cooperate with. Getting the Shoal Creek Trail finished has been a priority for Austin for a long time, and I'm glad we can help participate in that. And I have a 5-year-old and a 2-year-old, and I'm on that trail all the time, so I benefit as a trail user."

The photo (above) shows the current state of the Shoal Creek Trail between Third and Fifth streets.

The map shows the South and North Walnut Creek Trails and a proposed Austin-to-Manor Trail.

We stated that the interlocal agreement for the Austin-to-Manor trail still awaited final approval by the Capital Metro Board of Directors. In fact, it was approved by the board at its May 24 meeting. The Chronicle regrets the error.