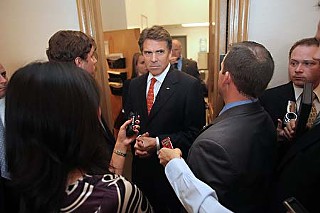 It had already been a bad week on the state finances front, with Rep. John Otto, R-Dayton, telling the Select Committee on Fiscal Stability that the state is almost out of bonding capacity. Now the GOP leadership has asked state agencies, which have just begun their budget request calculations for the 2012-13 budget cycle based on across-the-board 5% cuts, to construct a supplemental schedule with an additional 10% reduction in general revenue spending.

A supplementary letter for the Legislative Budget Board clarifies the situation, and it's even worse than it seems. The board now says that the starting point for any calculations isn't the current 2010-11 budget the Legislature passed last session but the recently and retroactively revised version with 5% slashed out of it.

In a press release last week, Perry said, "This request for 10 percent reduction proposals for the next biennium builds on our ongoing call on state agencies to tighten their belts so Texas can continue our commitment to keep taxes low, attract businesses and create jobs as we continue to lead the way out of the national economic downturn."

However, the Center for Public Policy Priorities has warned Republican leadership that this "cut and cut again" approach is a catastrophe waiting to happen. The CPPP's recommendation is to tap the Rainy Day Fund (currently at $9 billion) as a short-term stop-gap, then actually revise the state's malfunctioning tax base.

Perry's request does include exemptions: On the purely finance side, the LBB protects bond service payments and cash to fulfill employer contribution requirements for state pension and employee group benefits (worrying coda: The letter warns that "group benefit modifications may be considered"). Medicaid and health and human services eligibility staffing are also said to be off the chopping block. Most of the exemptions involve children, with protections for the Children's Health Insurance Program, foster care, and the Foundation School Program. However, that still means massive cuts may be on the table for the rest of the educational system. Texas American Federation of Teachers President Linda Bridges called this proposal "a glib request to 'tighten our belts.'"

She put the blame on the "faulty 2006 tax swap that cut school property taxes without fully replacing the lost revenue from alternative tax sources as promised." The end result, she noted, is a $9 billion deficit. The recent 5% cut meant $120 million dropped from Texas Education Agency funding. What was targeted, she noted, were services like dropout prevention, community service, and intensive summer programs – those generally designed to keep at-risk students in school. "We're past the last notch on our public education belt," she warned. Bridges' estimate of a $9 billion deficit may in fact be painfully low, since more recent projections for the 2012-13 biennium are closer to $18 billion. If Congress approves reforms to the matching funds system for Medicaid, that could require another $1 billion from state coffers on which budget builders had been counting.

As for the Rainy Day Fund, that could become the subject of a game of political brinkmanship next session. Perry and the conservatives remain committed to sinking it into property-tax relief next session, but more moderate Republicans have joined the broad chorus that it must go into shoring up the sinking budget. However, to tap the fund would require a two-thirds legislative majority: Sen. Kirk Watson, D-Austin, has already warned that he will not vote to do so unless there are serious efforts to fix the process of building the state budget. At a recent Texas Tribune breakfast, Watson said, "We come back session after session and try to put Band-Aids [on], and the Band-Aids are all washing off."