At last – after weeks of detailed analyzing, careful deliberation, and creative crafting – Democratic leaders in Washington have unveiled their bold legislative response to the Supreme Court's January dictate allowing oceans of corporate campaign cash to flood America's elections. And – ta-da! – here it is: The DISCLOSE Act (or, more fully, the "Democracy Is Strengthened by Casting Light On Spending in Elections" Act).

Gosh, couldn't they come up with a more cumbersome title? More to the point, couldn't the Democrats have come up with a more proportionate response to the court's enthronement of corporate money over our people's democracy? The court's decision is the nuclear bomb of politics, for it allows any and every corporate giant – from Wall Street to Wal-Mart – to pour unlimited sums of money directly from their massive treasuries into campaigns to elect or defeat anyone they choose. And the Democrats' response is a disclosure bill?

Sadly, yes. The bill requires corporations and their front groups to disclose, by name, which outfit is paying for any particular campaign ad. That's good, of course, but – that's it? That's like legalizing bank robbery as long as the robbers wear name tags.

We can't let these pusillanimous Democrats get away with this pathetic response. It is, after all, our democracy that the court is turning into a plutocracy. The proper response is one word: No. Actually, make that two words: Hell no! And the way to say it so it matters is with a constitutional amendment that overturns this outrageous ruling.

The court can issue rulings, but We the People are the rulers. If sad sack Democrats won't stand up for us, we must do it ourselves. Connect with a nationwide coalition pushing an amendment to overrule the court: www.freespeechforpeople.org.

How grand it was in Washington for Hamid Karzai. The corrupt, inept president of Afghanistan – whose regime is being propped up by 87,000 of our troops and $7 billion a month from us taxpayers – got the red-carpet treatment in our capital city in May, including a meeting with President Obama in the grandeur of the White House.

On the same day as the Obama-Karzai chat, about 20 women gathered curbside on a busy Manhattan street. The scene there was less grand but a whole lot more honest. Inspiring, even. These were "the grannies," a brigade of ladies whose ages range from the mid-60s into the 90s. They come together every Wednesday to protest Obama's war in Afghanistan.

This particular Wednesday marked the 331st consecutive week of the grannies' stand, going back to the early months of George W.'s Iraq war, which is still going on, so they protest it, too. Every week – whether in the cold of winter or in the searing heat of August – they unfurl their banners, unfold their homemade placards, politely hand out their leaflets, and talk with anyone who'll listen about their deeply held convictions against the two wars. Occasionally they'll ring out with a chant: "Bring our troops home now ... alive!"

Persistence, integrity, speaking out – it all matters in our country. Yes, the wars go on. And, no, Obama, the generals, the war contractors, and our lawmakers are not listening to these feisty citizens. But others do hear them. "The point is to interfere with the routine," explains one of them. "As people walk down the street, it has an impact on their consciousness."

Thank goodness someone is standing up for peace and justice. Laurie Leon, whose age she simply describes as "very, very senior," cheerfully says, "I won't stop till I drop." The question is not why these ladies are out there every week. The question is: Why aren't we? 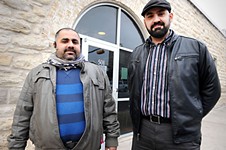