Media Watch: 'I Want My KGSR!' 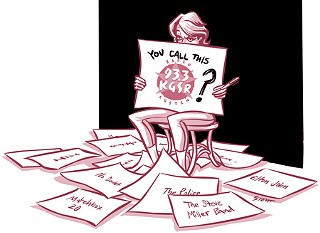 Jen Andrew remembers clearly when she realized something was different on KGSR, the station known for playing a uniquely Austin blend of folk, blues, and country rock music. First it was a Natalie Merchant song. Then she noticed a stream of hit songs from groups like Matchbox Twenty, Sugar Ray, and Collective Soul. "I thought I was just going crazy," the 26-year-old personal trainer said. "I thought maybe they were just playing a lot of crappy music."

When she called the station in December, staffers denied there was anything different. No format change was ever announced. But the fans knew. When Andrew started a Facebook page – "I want the old KGSR back...NOW!!!!!" – devoted to bitching about what she was hearing on the station, more than 1,000 people signed up. "It made me feel better when I realized I wasn't the only one," Andrew said.

KGSR's devoted fans have been in a Twit­tering and posting frenzy for months now, after a series of behind-the-scenes moves at the legendary "adult alternative" station. In November, longtime music guru Jody Den­berg resigned after 19 years, citing personal and health reasons. A few weeks later, station owner Emmis Communications abruptly switched the station's frequency from 107.1 to 93.3, moving from a transmitter in Bastrop to a tower in Cedar Park. The new signal was stronger, but overnight many listeners in KGSR-bastion South Austin couldn't hear the station.

At the same time, without fanfare, management began reprogramming the mix of songs, pumping up the number of classic rock standards and pop hits. More than 300 songs have been added to the rotation, according to station sources, increasing the odds of hearing, say, INXS or the Goo Goo Dolls in a half-hour block rather than Ray Wylie Hubbard or the Gourds.

To some devoted fans, the station might as well have switched to Albanian chant music. While the machinations of most radio stations rarely rate a tweet – suffice it to say no one jumped off a bridge when Emmis dropped the hip-hop format from 93.3 – this is KGSR, the station "where the music comes first," a key part of the city's musical fabric for 20 years.

KGSR management is addressing the signal issue by buying a West Lake Hills-based "translator" frequency, which will carry KGSR to South Austin on 102.7. But they're finding it tougher to counter charges they've squashed the soul of KGSR, as some longtime devotees claim. "Is chasing a lil' more billing worth losing ALL credibility as a music lover's station?" one distressed listener wrote.

But from management's perspective, the moves were essential to ensure the survival of the KGSR format. Despite the adulation for the old format, in the last two years KGSR's ratings consistently fell out of the Top 10 local stations in the key 25-54 age group. Advertisers traditionally paid a premium to connect with KGSR's enthusiastic base, but they retreated when the economy went bad. While all radio stations suffered last year, KGSR's revenue fell more than 20%, Emmis market manager Scott Gillmore said; "KGSR would not have survived if we kept doing what we were doing."

Public radio station KUT's move into the commercial fray by programming more "Amer­i­cana" music added to the problem, siphoning listeners and advertisers. But there's also been a fundamental shift in the audience, as KGSR's core listeners grow older and move out of the 25-54 range coveted by advertisers. (One current advertiser promotes a treatment for menopause.) "Essentially, to some extent, the audience has aged out of the demo," said Gillmore, who has been with the station since its inception 20 years ago. "Austin has grown so much, a lot of people weren't here when we started the station, and they are not as deeply invested in the traditional Austin sound."

A few more John Mayer, Toad the Wet Sprocket, and U2 hits are a small price to pay for the continuation of KGSR as a local station, says disc jockey Andy Langer. "I may not like Matchbox Twenty. I may not walk across the street to see Matchbox Twenty," Langer said. "But the numbers prove that a bunch of people like Matchbox Twenty." He describes the complainers as a "small, vocal minority" who are missing the big picture. "Has the station been resistant to change for a long time at its own detriment? Sure," he said. "Do people in town embrace change? No."

In fact, the station has been slowly and steadily changing since Indianapolis-based Emmis bought it and five other Austin stations in 2003. Many of the loathed bands in the current rotation actually have been part of the station's playlist for years. Following the industry trend, KGSR has increasingly used research and focus groups to help program a large portion of the rotation.

After a long stream of corporate cutbacks and layoffs, many believe the era of the "old KGSR" really ended in early 2009, when longtime music director Susan Castle and promotions director Jyl Hershman-Ross were laid off. At the same time, the station began using prerecorded tracks from 6 to 10pm, dropping another live voice from the rotation.

Today Denberg reiterates that he left purely for personal reasons – "I was just tired," he says – but he acknowledges the direction of the station played a role in his decision. "I knew all the stations owned by Emmis had made program adjustments with the onset of 'people meters,'" he said, a reference to the Portable People Meter ratings system rolling out in Austin this year. "That played into it, but it certainly was not the crux of the decision I made."

Denberg said he doesn't regularly listen to KGSR and won't comment on the program changes. But others are eager to weigh in. With slanderous intent, some vocal critics compare it to "Bob," the perky-hits format on KGSR sister station KBPA 103.5FM. A typical half-hour on KGSR may include a run of Coldplay, Rolling Stones, and Bruce Spring­steen hits, as well as songs by Band of Horses, Alejandro Escovedo, and Amy Cook. "My first clue was when I found myself asking, 'How many Police songs are they going to play today?'" said longtime listener Robin Rieck, 48. "I just can't get on board with what they're doing, and I won't."

The issue with the signal is particularly annoying to both fans and management. The switch to Cedar Park was designed to broaden KGSR's presence, especially in fast-growing Williamson County. But management was surprised by the problems in South Austin – they heard few complaints when the station broadcast Hot 93.3, Gillmore says. After unsuccessful attempts to upgrade and tweak the Cedar Park signal, he hopes to have the new West Lake Hills translator operational by the end of summer, which should offer South Austin a clear, static-free KGSR.

Even with the signal issues, from management's perspective, the changes are working. In the most recent ratings period, KGSR returned to the Top 10 among 25-54 listeners, and the "cume" (cumulative) audience – the total number of weekly listeners – is up more than 25% in recent months. The tighter hits format also better positions the station for the Portable People Meters system, which rewards stations that play broadly popular hit songs.

Although Emmis continues to struggle, Gillmore says no more changes are planned for KGSR. A new marketing campaign promoting the station launched in May, emphasizing the mix of local and hit songs. The station will continue to support local causes and its lengthy list of events, Gillmore said. "All the things we are committed to, all those core values, they are all still a major part of the station," he said.

But it's too late for fans like Jen Andrew. She doesn't listen to radio any more. "I'm back to buying CDs and listening to my iPod," she said.