City attorney's resignation doesn't solve mystery of who did what when 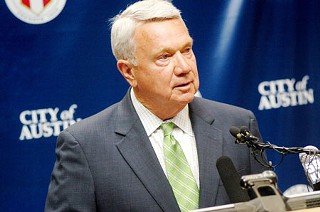 Mayor Lee Leffingwell (above) says he wants more answers from City Manager Marc Ott regarding his role in the handling of the KeyPoint report. (Photo by John Anderson)

Just days after City Attorney David Smith tendered his resignation to City Manager Marc Ott – after mounting political pressure over questionable legal advice regarding the redaction of the infamous KeyPoint report – the city manager on May 21 submitted a memo to Mayor Lee Leffingwell, describing the role the city's attorneys played in keeping much of the report confidential for more than seven months before ultimately releasing it to the public.

While Ott wrote that he shares Leffingwell's "commitment to protecting the public's trust in the integrity" of the Austin Police Depart­ment and believes "transparency and openness" are "critical" to maintaining the "public trust," he failed to address specific questions Leffingwell had asked in a previous memo regarding the role Ott or his staff played in "commissioning, receiving, reviewing and releasing the report."

According to city public information officer Nicole Sherbert, Ott has no additional comments "at this point in time." If the mayor would like additional information, she said, he'll request it. And indeed, Leffingwell told the Chronicle he intends to follow up with "written questions to fill those gaps" left by Ott. He said the council is set for a briefing today (Thursday) on the Ott memo, during which he said he expects to hear "lots of questions of staff from council."

Ott's memo to Leffingwell also included a report by Lee Crawford, the legal department's division chief, who noted, "City Man­age­ment and the Law Department believed that the meet-and-confer agreement and state law required the city to keep confidential those parts of the report concerning violations against [former APD Officer Leonardo] Quintana that were not sustained" by Chief Art Acevedo. In other words, it would appear that Ott also was confused on state law as it related to the police union's employment contract, which in 2004 made an exception to allow for the release of reports of outside investigations such as KeyPoint's inquiry into the 2009 fatal shooting by Quintana of Nathaniel Sanders II.

That acknowledgment came just two days after Smith submitted his resignation on May 19. City legal had insisted since last fall that state civil service law barred the KeyPoint review from being released in its entirety to the public – only to change its tune after the report was leaked to the media and the Chron­icle published online a transcript of the unredacted version (see "'Reckless Tactics' ... and the Blowback," May 14). According to the Crawford memo, after reading in the Austin American-Statesman on May 12 that police union President Wayne Vincent thought the report should be released, pursuant to the 2004 meet-and-confer contract agreement, city "representatives" realized their opinion of the law "appeared to be at odds" with what the union understood its labor contract to mean. The city then sought a memorandum of understanding to make sure both parties were on the same page (why that was necessary is unclear, since there doesn't appear to be any language in the contract that actually needed clarifying). The city then released the entire report on May 13.

For whatever reason, it appears city legal misunderstood a contract it had helped to create: The wording of the exception that allows for release of such reports is "complicated," Crawford wrote. Or was there more to it? That seemed to be the unspoken question in the memo Leffingwell penned to Ott on May 17, asking the city manager for a "detailed written accounting of city staff's decision-making process regarding the KeyPoint report, beginning with the decision to commission the report last year and ending with the decision to publicly release the report last week." And that includes whatever role Ott and his office played, Leffingwell noted. Smith's decision to retire does not change anything, Leffingwell told the Chronicle. Does he still have questions about how the city handled the report? "Absolutely," he said. "And, very importantly, I want to talk about what we can do to prevent" similar events from happening in the future.

That seems to be the consensus among the council. "We have to understand what happened and how it happened to keep it from happening again," said Council Member Laura Morrison. Inherent in that, she says, is understanding how decisions are made by legal advisers – and ensuring that the council is in the legal decision-making loop: "I would have preferred to understand the degree" to which interpretations were being made by legal and to what degree judgment calls were a part of the process, she said. "We need to be a part of that judgment call."

At the heart of the matter, says Leffingwell, is a desire for the city to be aggressively transparent with the public. Acevedo has said that is his desire as well. In court last month testifying in an open records suit brought against the city by the Texas Civil Rights Project, which was hoping to force the release of the report, Acevedo said he's committed to transparency, but that in the case of KeyPoint, the law blocked the release of the report – an opinion, it would stand to reason, that came from city legal. Indeed, that's what Council Member Mike Martinez said legal staff had told council members, who have said they never saw the unredacted report. "Reportedly, not only could we not see [the report], but that it would be a violation of the law" to have allowed the council to do so, Martinez said.

In his memo, Crawford states council was briefed about the report during an executive session in April, but according to the presentation delivered to council, they were told only that the report had been submitted, and, essentially, it was bad: KeyPoint had concluded that Quintana was "reckless and used excessive force." According to the Crawford memo, that's the extent of what the council was told.

Meanwhile, however, many questions persist. Without any word from Ott about what he did or what he understood about the KeyPoint report, the council is still not in a position to assure the public that such an episode won't happen again.

The KeyPoint Report
Selected transcript of the redacted sections