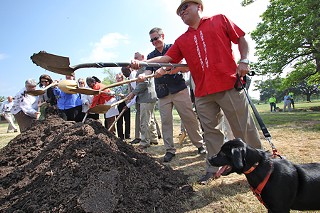 Mayor Pro Tem Mike Martinez, under the watchful eye of his dog Chucho, joins in the May 7 groundbreaking of a new $12 million animal center – the Betty Dunkerley Campus – just west of U.S. 183 near Airport Boulevard. The 41,450-square-foot center is slated for completion in late 2011. (Photo by Jana Birchum)

Talk about bond elections (see "City Hall Hustle") isn't the only thing on City Council's Thursday, May 13, agenda. Council is slated to adopt the Citizens Water Conservation Implementation Task Force recommendation to reduce total per capita potable water production to an average of 140 gallons per capita per day by 2020 and to direct the city manager to develop a 10-year conservation plan (Item 35). Similarly, they'll also ink a $224,500 contract with Enviromedia Social Marketing for water conservation outreach (Item 21) and will receive a 10:30am briefing on the city's water conservation marketing and outreach plan (Item 45). In other ecological news, council also receives a briefing on the short-listed proposals for an Austin-based materials recovery facility, the sorting center required for the city to recycle its blue bin single-stream intake locally (Item 46). Lastly, items from council include a proposed ban on city travel to Arizona and examination of the city's business ties with that state (Item 30) and setting the compensation and benefits for City Manager Marc Ott (Item 37). – Wells Dunbar

The Property Rights Case That Refuses to Die

After its most recent setback in an eminent domain case, the city of Austin has turned to the Texas Supreme Court in hopes of securing a favorable ruling in what would be its last appeal in a long-running legal battle. According to Assistant City Attorney Anne Morgan, the city has filed a petition for review of a March decision by the 3rd Court of Appeals, which sided with Harry Whittington in his effort to regain control of a Downtown block now occupied by the Convention Center parking garage. The city took possession of the property – bounded by Fourth and Fifth streets and Red River and Sabine – and proceeded to build the parking structure as the property rights case played out in court. Should the city fail to obtain a victory in its last appeal, it would then need to negotiate an agreement with Whittington to ensure the continued operation of the parking structure, which also includes an Austin Energy chilling plant. – Amy Smith

With forecasts for a deficit in the next state budget reaching catastrophically high levels, the Republican leadership of the Lege is proposing gambling its fiscal future on, well, gambling. On May 11, the House Approp­ri­a­tions Committee received testimony from the Legislative Budget Board that the deficit could reach $18 billion in the next biennium, dwarfing the state's $8.2 billion Rainy Day Fund. However, in an unusual committee appearance, Speaker Joe Straus poured cold water on the idea of aggressive measures to fix the state's broken tax base. Stressing that the committee should concentrate on "developing a balanced, no-new-taxes state budget," he proposed canceling issuing new construction bonds while instigating partial hiring freezes, four-day work weeks, and unpaid staff furloughs. He told the committee that other states have taken similar steps (while omitting that they did so as the U.S., was heading into a recession, not coming out of one). The one major proposal for a new revenue stream came from Committee Chair Jim Pitts, R-Waxahachie. He proposed exploring extending legalized gambling but warned, "Frankly, the figures that I've looked at for gambling ... will not help us much this next biennium." – Richard Whittaker

Bike Plan on Road to Council

The Downtown Bicycle Boulevard proposal rolls on to City Council with nary a bump in the road – it has sailed through the boards and commissions process with unanimous support, concluding with the Urban Transportation Commission Tuesday night. It was the UTC's second swipe at the boulevard – the commission put off a vote last month to wait for an economic impact study by Angelou Economics. Whether the commissioners got any useful information from the study is questionable – as critics noted, the study is thin as tissue paper. Angelou predicted, at best, a modest increase in economic activity on the Nueces and Rio Grande streets corridor of $2.6 million to $5.6 million spread out over 10 years. However, Angelou admitted flaws: There is little precedent for studies of such boulevards in other cities; the study is based on the city's own traffic impact study, which property owners on the corridor dispute; and it's based on retail impacts, but the corridor's businesses are mostly client-based, such as lawyers' or doctors' offices. "I'm wondering if the people who ordered this study confused commercial and retail," property owner Phyllis Warner asked. "The kind of traffic to our offices is not bicycle traffic." The proposal is scheduled to go before Council June 10. – Lee Nichols

Neighbors fighting a questionable remodel project at 1915 David won two rounds of appeals last week, reversing staff decisions. Both the Building and Fire Code Board of Appeals and the Board of Adjustment ruled in favor of the Original West University Neighborhood Association. City staff had previously filed a stop-work order on the property; however, staff had allowed owner-developer Mitch Ely to get the project permitted as a remodel rather than as new construction – even though the two existing structures had been torn down. (Attorney Nikelle Meade said she is no longer representing Ely on 1915 David; he is represented by agent Mike McHone.) The staff interpretations had gained Ely a maximum occupancy of 12 persons, rather than six, for two proposed houses to be used as student rentals. Nuria Zaragoza, who filed the appeals on behalf of OWUNA, said the neighborhood's goal was to limit occupancy to six people. She said the Board of Adjustment explicitly confirmed that the occupancy limit on the site should be six persons; it voted unanimously in OWUNA's favor on three of the four points. "I think BOA was very clear in closing the door to a remodel," she said. The rulings raise new questions about the long series of city staff interpretations in favor of the developer. The owner now must start the building permit process over, said Zaragoza: "If he wanted to build the structures he proposed, it now would require a zoning change." However, Ely is likely to seek a reversal of the decisions. Those appeals would go to district court (BOA decision) and to City Council (BFC decision). – Katherine Gregor

Who Knew a Fountain Would Cause Such a Splash?

The Liz Carpenter Fountain, located in 22-acre Butler Park, next to the Palmer Events Center and the Dougherty Arts Center, was designed to serve exclusively as a decorative feature, but it became an important children's splash feature soon after its opening in August 2007. A recent closure of the fountain for repairs and subsequent rumors that it would be off-limits to splashers in the future have created a backlash in the surrounding neighborhood. There is even a 600-member Facebook group called "Keep Liz Carpenter Fountain at Butler Park Running and Let Kids Play There!" According to the city of Austin Parks and Recreation Department's website, problems with the fountain control system, injury to park patrons from the sharp edges on the granite, skateboard damage, treatment and filtration systems that are not up to state code and require constant maintenance, and the absence of local repair and parts are just a few of the difficulties facing the ongoing use of the fountain as a splash feature. The city's recommendation is actually not to leave the fountain dry but to maintain it as a decorative feature until changes can be made to bring it up to health standards and make it affordable to maintain. Other recommendations include bringing the wading pools up to grade and adding a children's garden and splash pad in the southwest corner of the park. If you'd like to voice your opinion on the matter, there are two occasions to do so: Tuesday, May 25, 6pm, before the Austin Parks and Recreation Board in Rm. 1101 at Austin City Hall, 301 W. Second, and Sunday, May 16, noon, at the Liz Carpenter Fountain. – Anne Harris