How mobile is your taco? 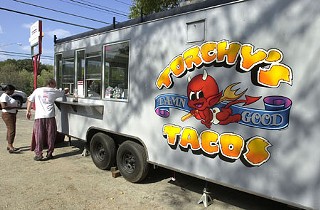 Regulations for "mobile" eateries were sidelined last week, as they didn't differentiate between truly mobile vendors and stands like Torchy's Tacos. (Photo by John Anderson)

The question of further regulating stationary food carts – that burgeoning bastion of the local foodie scene that includes such stands as Kebabalicious, Lulu B's, and Austin Daily Press – came before a City Council subcommittee last week. And while council's Public Health and Human Services Committee decided to postpone specific action, it was apparent the city had a lot to sort out in the meantime.

The proposal for additional regulation had been initiated by Snappy Snacks owner Tom Ramsey. Some five years ago, Snappy Snacks – which operates and leases a series of truly mobile trucks catering to different construction and office crowds daily – was cited for code violations, inspiring Ramsey to take a closer look at whether his competitors were complying with the same codes. He says the city "assured me that a lot of the folks would come into compliance. That hasn't happened." To illustrate that point, consultant Paul Saldaña, on behalf of Ramsey, showed committee members Randi Shade, Mike Martinez, and Laura Morrison photos of fly-by-night vendors, one with a poorly secured oven in the back of a pickup truck, dangerously connected to a propane tank.

However, city code draws no differentiation between truly mobile proprietors, such as Snappy Snacks, and the essentially stationary carts/trailers clustered in places like South Congress Avenue, South First Street, and Downtown. Sue Simons, with the Austin/Travis County Health and Human Services Department, said the only distinction on the books was between "restricted" and "unrestricted" mobile units, the former only selling pre-prepped, prepackaged foods, like an ice cream truck, the latter actually preparing and cooking food itself, like Snappy Snacks. So when Ramsey's 40-plus recommendations came to the city, regardless of whether he intended to ensnare the stationary food carts, he did. "I'm very concerned about everyone trying to blame us," he says. "Some of those recommendations that are going to affect the trailers have nothing to do with us."

Indeed, in the last month, several recommendations emerged from various city departments. Of the 20-plus potential recommendations listed on a handout at the committee meeting, only seven originated with Snappy Snacks. Bob Gentry, co-owner of cart success story Torchy's Tacos, told the committee that "within the last two weeks, we have had eight departments join the train." Afterward, Gentry highlighted a planning proposal that would prevent vendors from opening until noon on Fridays and Sat­ur­days. "If you like breakfast tacos," he said, "you're not going to be able to get them until the afternoon."

Mike Martinez noted the strange evolution of the process: "For me, in my office, the only conversations we had were about the truly mobile food vendors" like trucks, he said. "That's where this conversation started." While "good work" had been made on truly mobile vendors, Martinez said, "I don't believe that we've had a full process to ensure whether or not these are the appropriate measures to be taking" for stationary and truly mobile vendors alike. "I think some of [the proposals] are reasonable; I think some of them make sense. But at this point in time, I'm not clear that all of them make sense." He also announced he would make a substitute motion for staff to separate the two "static" and "truly mobile" classes of vendors. The committee agreed, with the expectation they would address regulation only for truly mobile vendors on June 15, if recommendations were ready by then. As for stationary mobile vendors, Martinez cited a need for "more public dialogue, more communication" before any additional regulation could be vetted. Morrison implored staff to use "the lightest touch possible" and "an approach with the least regulation" when considering stationary carts.

While differentiating between the two types of "mobile" is a needed first step, committee Chair Randi Shade seemed less convinced than her colleagues that a hard, fast line could always be drawn. Tribeza magazine founder Zarghun Dean cited the example of Los Angeles' Kogi BBQ as a business he'd like to emulate. While catering to the same hip, hungry, hungover demographic as most stationary carts, it's an unrestricted, "truly" mobile vendor that announces its schedule daily on Twitter. With that example in mind, "I'm still not convinced the difference between 'true' and [stationary] makes sense," said Shade.

To that end, one point of contention between mobile and stationary vendors could be Snappy Snacks' proposal that vendors use a licensed commissary to prep and cook food. While city code recognizes basically any restaurant as an acceptable commissary, Ramsey's company is pushing for a requirement that commissaries include a truck-washing spot complete with grease traps – a mandate that isn't exactly applicable to stationary vendors and could cause enforcement troubles. Still, Shade said, "there is not a health emergency" necessitating sudden, sweeping action against stationary vendors.

Other issues Gentry is watching closely are parking and restroom requirements. The former, he feels, isn't terribly important, as many carts sit on undeveloped or underdeveloped plots, but requiring plumbed restrooms would raise the question of whether a mobile vendor would no longer be truly mobile. (Most carts have – or should have – agreements with nearby businesses for customer use of their restrooms if no portables are available.) Moreover, he wonders how many of the department-proposed regulations are in fact inspired by brick-and-mortar competitors, fearing undercutting by the success and low start-up cost of mobile vendors: "Person­ally, I believe that they are side issues they're bringing to the table, things that involved the restaurant association, or restaurants here in town, where they've not felt like things were on a level playing field with the mobile food vendors."

Whether those criteria are now in flux is a question that will eventually land on the City Council dais. 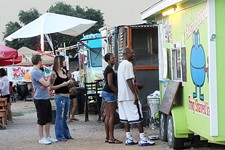