Point Austin: Feet on the Ground

If May Day has a meaning, it's one we build together 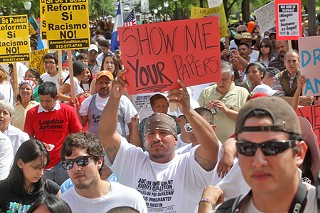 An estimated 10,000-plus people gathered at the state Capitol for a May 1 rally and march against an Arizona bill deemed the stiffest – and most inhumane – anti-immigration measure ever passed in the U.S. (Photo by Jana Birchum)

It was bracing to see thousands of people in the streets May 1, from New York to Los Angeles – and not excepting the 10,000 marchers Downtown – in opposition to the newly enacted Arizona anti-immigrant law (Senate Bill 1070) and, more generally, in support of immigrants (pretty much all of us, by the way). And it was reassuring to see Austin Police Department Chief Art Acevedo publish a stinging op-ed against the Arizona law in Sunday's Statesman, on the very rational law-and-order grounds that wherever SB 1070 or similar laws are enacted, it will mean the end of "community policing" – that is, of cooperation with police officers by the largely Latino immigrant community (documented or not), under the knowledge that a person's "immigration status" would subject them at a minimum to unwanted attention and, at worst, arrest and deportation. If you had knowledge of a crime, would you report it to the authorities if you had good reason to believe that the subject of the subsequent investigation would be you?

It was also encouraging to see Austin's City Coun­cil and administration immediately react by reviewing the city's official connections to Arizona, for a potential official boycott, as one more piece of the national reaction that in substance has declared: Of all the potential solutions of the illegal immigration problem, SB 1070 ain't it. Even Gov. Rick Perry, treading eggshells on this subject in an election year, while acknowledging that Arizona has different problems (direct border-crossing occurs there in much bigger numbers), rejected the notion that such a law would work for Texas. (As a thought experiment, it would have been interesting to hear Perry's position in the middle of a GOP primary campaign.) Democratic gubernatorial candidate Bill White called for a "reality-based" immigration policy, telling The Dallas Morning News: "There are protesters who want open borders or protesters who think that 13 million people can be rounded up and sent back through the border. Americans want reality-based policies that allow our communities to be safer."

I note archly that White did not propose what a "reality-based policy" might look like. Perry has the additional, if well-deserved, headache that bomb-throwers in his party – notably Tyler's Leo Berman and Tomball's Debbie Riddle – have already promised to file similar legislation at the Capitol next year. Without Perry's support, the occasion is unlikely to reach the dismal spectacle afforded by the voter ID debate – which also, supporters told us, had absolutely nothing to do with race – but it's even more unlikely to advance the discussion of what to do about the entire immigration conundrum, which, as White points out, tends to swing between unsupportable extremes while drowning any politician who tries to tread water in the middle.

What made the law possible in Arizona is the currently intensified racial polarization of its politics and a couple of sensationalized border crimes that have nothing to do with the daily life of most immigrants. It remains impossible to understand how forcing undocumented workers even further into the shadows will have any effect on "crime in the streets" except to worsen it, making the law's official title – Support Our Law Enforcement and Safe Neighborhoods Act – particularly absurd. A more accurate name would have been something like "Open Season on Immi­grants for Cops and Criminals," an unholy alliance that many Arizona police officers – echoing Acevedo's arguments – have declared they have no interest in joining.

Most commentary has focused on the racial profiling aspect of the law – which is undeniable, even after a recent cosmetic amendment to remove the explicitly racial standard for suspicion of illegal status. The law also features equally mean-spirited provisions such as forbidding "unauthorized aliens" (e.g., day laborers) soliciting work in a public place and even authorizes citizens who believe a cop is not sufficiently zealous in enforcing the law to sue the authorities. If nothing else, the court cases should be endlessly entertaining on the curious cultural habits of the various tribes of North America.

So where does all this leave us? Although Congress and the White House have been put on notice by the Arizona law and the national public response, it's frankly unlikely that the Senate partisan gridlock can be broken in any significant way before November (House Speaker Nancy Pelosi has said that the House isn't going to take a voluntary beating if the Senate is immovable). A sane solution, even with tighter border security, would offer some kind of graduated amnesty and citizenship for the millions of hard-working people who have lived in the U.S. for years, many since they were children. Does anybody within the sound of my voice believe that sanity, in national political matters, is in the offing?

The United States, particularly in its economic policies and the international behavior of its corporate businesses, has mightily helped to create the underdeveloped conditions south of the border that inevitably feed illegal immigration, and our national economy continues to ride on the backs of the cheapest labor. To see the droning advocates of "free trade" applaud the unfettered movement of capital while criminalizing and terrorizing every attempt of working people to level the international economic playing field on their feet is a persistent education in structural human hypocrisy. And it certainly does no good for undocumented workers that they must live and work as a permanent underclass of officially invisible cheap labor, subject to every form of exploitation and unsafe working conditions, so that the rest of us can enjoy cheaper houses or fancier restaurant meals – all the while muttering darkly about the aliens among us.