On April 21, Friends of the Cactus Cafe and other supporters of the venerable music venue formed a human chain featuring several thousand petition signatures seeking to halt the University of Texas' plans to close the site. "See "Rush to Judgment on Cactus?," and "Off the Record," Music. (Photo by John Anderson)

At press time Wednesday, construction workers affiliated with the Workers Defense Proj­ect were planning an evening protest at the Gables Park Plaza condos on Sandra Muraida Way, demanding back wages they say they are owed by Dallas-based contractor Greater Met­ro­plex Interiors. These are among the same workers employed by GMI (via a subcontractor) on the 21 Rio project last June, when three were killed in the collapse of faulty scaffolding; the U.S. Occupational Health and Safety Administration subsequently assessed fines totaling $159,600 against four contractors. According to a WDP press release, GMI has offered to pay $18,805 to approximately 25 workers who say they were owed $120,000 in straight pay and overtime when the accident occurred and the subcontractor, Capoera Construction, disappeared. "We have tried to settle this with the company and have asked the developers to step in. But now that these apartments are built, no one seems interested in helping us," said German Zaravia, who says he worked an average of 70 hours a week, six days a week, on the buildings' exteriors. "We just want to be paid what we are owed, and want to make sure that these developers think about the conditions of the workers on their sites." – Michael King 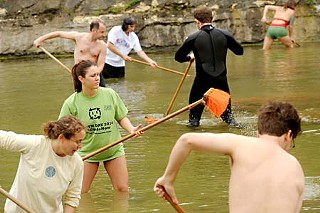 Friends of Barton Springs and other volunteers spent April 22 cleaning Barton Springs Pool as part of a number of Earth Day activities. (Photo by John Anderson)

The battle between the Austin Revital­iz­a­tion Authority and surrounding neighborhoods just took yet another turn for the worse. After the Swede Hill and Robertson Hill neighborhood associations sent a resolution earlier this month to City Council requesting that the city's official relationship to the ARA be terminated (see "ARA Needs to Go, Groups Say," April 2), the ARA board of directors on April 20 voted to remove those groups' representatives from their seats on the board. "Those specific representatives were doing things that were contrary to the interests of the ARA," board Chair Dr. Charles Urdy told the Chronicle, referring to Swede Hill's Rob Seidenberg and Robertson Hill's Stan Strickland, who reportedly helped draft the resolution. "This is just contrary to anything that any board member of any organization should ever do. A board member's responsibility is to do things that positively impact the organization." Urdy said the two groups can appoint new members. The ARA's current contract with the city for expenses related to revitalizing the East 11th and 12th street corridors expires in Septem­ber. On Tuesday, the two associations sent a letter to council members questioning whether the removals ran contrary to a 2000 contract with the city that stipulated expanded neighborhood representation on the board. At press time, council members were in special session and could not be reached for comment. – Lee Nichols

It's still unclear whether the state used junk science to convict Cameron Todd Willing­ham – and sentence him to death – for a 1991 arson murder in Corsicana. The state's Forensic Science Commission, charged with reviewing the use of arson science in that case (and another case involving Ernest Willis), decided April 23 that the nine-member group will now be split into five smaller panels to handle various tasks. The decision means the subgroups can meet in private since none will constitute a quorum. Conven­ient­ly, commission Chair John Bradley will sit on two of those panels, including the "investigative panel" for the Willingham and Willis cases, which will include the three newest commission members (put in place last year by Gov. Rick Perry in a membership shake-up that put the Willingham review on hold) and a fourth, forensic science professor Sarah Kerrigan, on the committee since 2007. At the time of the membership changes – wherein Perry installed Williamson County District Attorney Bradley as commission chair, a position previously decided by the membership – the commission was set to hear testimony from fire-science expert Craig Beyler, who had concluded in a report that junk science plagued the Willingham case. Bradley then canceled the meeting with Beyler; the commission hasn't returned to the subject since. – Jordan Smith