Showdown at David Street: City Regs Broken at Will 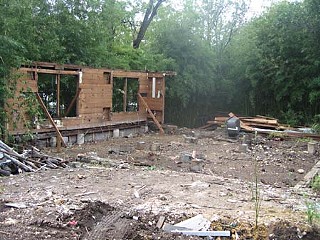 This project at 1915 David St. resembles more of a demolition than a remodel. This shows the back portion of what will ultimately be two rental houses on a single-family lot. (Photo courtesy of OWUNA)

"I'm just not understanding why the city would bend over backwards, at every turn, to waive its own rules to allow this project to happen – to help an owner who has violated city code for years."

That's the question posed by Nuria Zara­goza, president of the Original West Uni­ver­sity Neighborhood Association, about a purported "remodel" project at 1915 David St. The root problem, Zaragoza believes, is a pattern of behavior by city staff, who appear to do whatever is necessary to accommodate an owner-developer. Even when neighborhood associations submit strong, compelling facts that an owner has flouted city law, staff, more often than not, rule in the owner's favor.

"This is the poster-child case," said Zara­goza of the contested plan to build two new two-story houses, which could be leased to as many as 12 college students, on a single-family lot located on a quiet residential street of bungalows. Zaragoza has compiled thick binders on the case, documenting a history in which city staff have forgiven a considerable number of violations, "errors," and apparent misstatements, by owner-developer Mitch Ely and his agent, Mike McHone, both long-time real estate professionals well known at City Hall. Neighborhood advocates say they've fought the duo on a number of similar cases, including two others recently on the same small street.

Over the years, city staff had documented serious code violations on the old rental units at 1915 David St. According to Zara­go­za, student renters had appealed to the city for help to force Ely (who does business as Cobalt Partners) to fix unsafe conditions, on both the original front house and a "garage apartment." (Greg Guernsey, director of the city's Planning and Development Review Department, said the front house had an illegal third bedroom, a garage conversion; the rear unit had been illegally expanded to four bedrooms.) A July 25, 2007, order of the Building and Standards Commission cited longstanding violations that included: missing stair handrails, substandard construction, unsafe wiring and other electrical violations, faulty weather protection, a hazardous fence, and hazardous plumbing.

The owner ignored the city order, and penalties began accruing at $500/week as of Sept. 28, 2007, for "a public nuisance with substandard conditions." The owner continued to lease to students, despite the unsafe conditions, and let the penalties pile up. A Building and Standards Commission penalty statement dated April 16, 2010, reflects $61,857.14 in accrued penalties. Asked about the penalties, McHone said he'd never heard of them: "I don't know anything about that."

Abruptly, the city not only stopped assessing fines, it waived the full amount due. According to a statement signed by Sonja Prevo, a coordinator for the Building and Stand­ards Commission, on March 18, 2010, the Code Compliance Department found that the owner had "repaired" the property. In reality, Ely had drawn up plans for two new houses and quietly demolished the old ones – without a legally required demolition permit. (That violation, too, was mysteriously forgiven by staff, despite the fact that it illegally avoided a required historic building review, said Zara­goza.) Guernsey said he was informed by Code Compliance Director Willie Rhodes that the entire $61,857.14 bill was deemed "noncollectible." 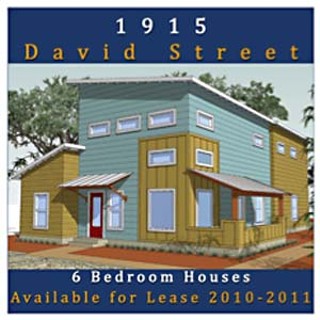 The developer claims that these two new houses – one under a city stop-work order – are remodels, with only six bedrooms (2 + 4) in total. Yet in this online leasing ad (l), each has been openly advertised as a six-bedroom house. The city's Greg Guernsey said that after reviewing this ad, he is exploring with the city's Code Compliance Department and Law Department the city's ability to "enforce a law or rule based on the intent of an applicant."

When Zaragoza asked why, she was told it was because the word "duplex" was used in the July 25, 2007, order. Since the use of the property as a duplex was illegal, that term was technically incorrect – raising the possibility that the order and penalties could be reversed in court. In addition to waiving the fines, staff also decided the developer could proceed based on its "accidental" initial filing of a commercial building permit (thus blocking a neighborhood appeal) rather than the required residential permit.

To double the total permitted occupancy (and thus rental income) from six unrelated tenants to 12, said Zaragoza, "they're working two separate loopholes." That charge was echoed by Mary Ingle and Al Godfrey of the Central Austin Neighborhood Planning Advis­ory Committee (an umbrella organization that includes the Original West University Neighborhood Association), which has been fighting the case. As confirmed by Guernsey, new city code adopted in 2004 would limit the property to occupancy by six unrelated persons. However, it could be "grandfathered" for an occupancy of 12, if two specific criteria are met: First, the project must be a "remodel" rather than new construction; second, it cannot increase both the square feet and the number of bedrooms.

City staff interpreted the regs in the owner's favor on all three points. A remodel requires that each structure retain at least one wall and the foundation. Yet, Zaragoza says, "Staff interpreted this rule as, 'Only a portion of the last remaining wall must remain, and a slab foundation could be poured on top of the old pier-and-beam foundation and still be considered the original foundation.'"

Second, staff certified site plans that identify a total of only six rooms as bedrooms – by labeling other similar rooms (all with private doors) as a "study" or a "game room." Guernsey responded: "I don't have the luxury, in enforcing city code, of making a decision based on what the applicant might do. Their site plan shows a two-bedroom house and a four-bedroom house. I can't assume they intend to lease all of the rooms shown as bedrooms."

As it turns out, no assumptions are necessary. As of April 26, the property's preleasing website (www.texanproperties.net) advertised 1915 David St. for rent as two "6 Bedroom Houses" (the text has since been changed to "New Campus Houses"), which it describes as "specifically designed for the needs of students." The 1915-A floor plan showed five rooms usable as private bedrooms; the house rents for $4,250 per month. The 1915-B floor plan shows six bedrooms (all labeled "room" on the website, but labeled differently in submitted plans) in a house rentable for $4,950 per month. Each house has three full bathrooms and a large living room and kitchen. (However, the site has just one parking space – another requirement waived by city staff for the owner.)

McHone, interviewed by phone, asserted that the front house has only two bedrooms and the rear house only four. "What I'm saying is, we didn't increase the number of bedrooms." The city issued a stop-work order on the rear house – which McHone is contesting because "occupancy is something that occurs when somebody moves into a structure, not beforehand. [The city's order] sets a dangerous precedent, because it's a presumption of guilt, rather than waiting for there to actually be a crime." He added with a laugh, "If more than six people move in there, throw me in the slammer." Informed that the leasing website describes two "six-bedroom houses" for rent, he distanced himself from leasing, saying, "I don't know anything about that." But he laughed and said, "It sounds to me like they're confessing to creating a crime – but the city can't stop work, because they haven't committed it yet."

Neighbors are also appealing to City Man­ager Marc Ott, who has agreed to meet with them after the May 5 hearings. "If we're committed to a denser, pedestrian-oriented city," pointed out Godfrey, an architect with city contracts, "then the city needs to create confidence that the rules in place will be enforced so that neighborhoods don't fear being overrun."