Point Austin: The Body of Christ

When public officials engage in literary criticism, the results are seldom edifying. So last month, when Lt. Gov. David Dewhurst sharpened his election-year claws on playwright Terrence McNally and a handful of defenseless students at Tarleton State University, it marked another low point in Texas politics and culture: the state officially proclaiming its ignorance and intolerance at one blow. As Chronicle colleague Richard Whittaker reported at the time, Dew­hurst saw fit to condemn a student classroom production of McNally's play Corpus Christi because, as the Lite Guv inelegantly put it, "Every citizen is entitled to the freedom of speech, but no one should have the right to use government funds or institutions to portray acts that are morally reprehensible to the vast majority of Americans."

Dewhurst never condescended to explain what exactly he found "morally reprehensible" about Corpus Christi. Certainly the most morally vicious action in the play is the brutal crucifixion of its protagonist, but then that's a story regularly retold to every Texas schoolchild. Since its New York opening in 1998, McNally's play has been angrily condemned by some so-called Christians because it retells the story of Christ's birth, life, and death allegorically through the life of a young man called Joshua. Like McNally, Joshua was born and raised in Corpus Christi in the 1950s – and like McNally, Joshua is gay.

Although it's a commonplace of religious doctrine that God is present in all his creation – indeed it's the founding principle of most evangelical denominations – many "Christians" cannot abide the notion that gay people might actually see themselves in Christ. As McNally recently told Bloomberg News, "It just goes to show how much homophobia there still is in our society: How dare a gay man or woman think that Christ's divinity exists in him or her?"

In the end, Dewhurst's condemnation of McNally's profoundly Christian play provided official cover for the hundreds of thugs who called or e-mailed threats to Tarleton State administrators; the professor had to cancel the student production for fear of violence.

That's quite an accomplishment for a nominally "pro-education" politician. (As Whit­taker noted, the episode directly links Dew­hurst with British Sheikh Omar Bakri Muhammad, who condemned the London production for similar reasons.) One professional Fort Worth theatre offered to host the student play, then backed away; a touring production is scheduled for Dallas in June.

That might be the end of the story for Austin, except that the Statesman returned to the subject April 13, in its recently inaugurated "PolitiFact" feature, designed to sort out what's "true" and "false" in official statements. (It remains unclear what the rest of the paper is supposed to be doing.) In a valiant but misguided effort, Gardner Selby devoted considerable space to determining whether Dewhurst was correct in describing homosexuality as reprehensible to a "vast majority" of Americans, finally deciding that the statement is "barely true" – because according to available opinion polls, "Ameri­cans in general are split on whether gay relations are immoral; it's unmeasured how they'd rate unspecified acts in a play."

Alas, that strains at the gnat while swallowing the elephant – that is, Dewhurst's claim that he is a "strong defender of free speech," even while making certain that the students and the university would be prevented from exercising that speech, and by means of a religious standard – "Blasphemy!" cried the protesters – expressly forbidden by the First Amendment to the U.S. Constitution. Dewhurst explicitly objected to the use of "state resources" for the plays (little enough, since these were largely student-funded productions), and that is exactly where he crossed the line from literary Pecksniffery to official censorship.

In sum, the lieutenant governor used his office to help suppress a university student production of a play, because he – along with the hysterically reactionary Catholic Ameri­can Society for the Defense of Tradition, Family, and Property and a host of anonymous bullies – objects to its content, while he claims to support freedom of speech.

It doesn't require much research to spot that "pants-on-fire" lie.

Get Used to It

Rivaled only by Wharton's Horton Foote, McNally is the most accomplished and distinguished playwright ever to come out of Texas, and Corpus Christi is his work that ventures closest to home. It's a moving and often quite funny mash-up of Fifties Texas and New Testament, juxtaposing football and prom night with the miracle of the fishes and the last supper.

The writer will certainly survive this latest controversy, and his name and work will be celebrated long after Dewhurst and the rest of us have returned to dust. But it's a bitter accident that the 1998 opening of Corpus Christi coincided almost precisely with the Wyoming death of Matthew Shepard, beaten and tortured and left to die – for the morally reprehensible reason that he was gay. "All Corpus Christi asks of you," wrote McNally in his subsequent preface to the published script, "is to 'look what they did to Him. Look what they did to Him.'"

John Otte, the student director who chose the play, understood this implicitly, telling a reporter, "I am both a Christian and gay. ... I don't believe in a God who hates me for who I am. Never did I choose this play to attack Christians. I am one." As McNally put it to Bloomberg News, "Millions of people have been told, 'You don't belong at this table, you can't talk about spirituality, you're a sinner.'"

It's a shame and an outrage that, for whatever reason, as the second most powerful official in Texas, Dewhurst felt obligated to join that murderous chorus, thereby giving license to those for whom crucifixion is no metaphor. It was an uncharacteristic outburst from somebody who should certainly know better; in the same interview, McNally noted, "So much virulent homophobia is by men who are conflicted by their own sexuality."

When the thugs won and the production was canceled, a disappointed McNally said, "Corpus Christi is a play about God's unconditional love for all men and women, even those who would prevent you from seeing it. Gay men and women have taken their place at the table of faith, and they are not giving up their seats to anyone." 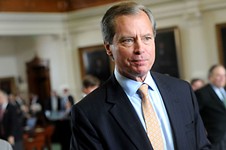