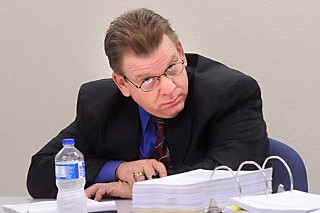 The arbitration hearing for former Austin Police Internal Affairs Detective Chris Dunn, who is trying to regain his job, wrapped up April 16 with testimony from two Travis County assistant district attorneys who said they would be concerned about having Dunn testify in court if he were to be reinstated by the hearing examiner considering his case. Dunn was terminated by Chief Art Acevedo last year for exhibiting "bias" in the IA investigation into the officer-involved shooting death of Nathaniel Sanders II by Officer Leonardo Quintana. Acevedo said Dunn's bias – which the department said was most clearly exhibited in a May 13, 2009, e-mail Dunn wrote to IA colleagues – had tainted the inquiry into whether Quintana violated any department policies during the shooting incident on May 11, 2009. In the e-mail, Dunn suggested that getting Sanders' probation records might help detectives make Sanders a "causation" of the shooting. During his own testimony, Acevedo said Dunn was now "damaged goods" and that his credibility – including on the witness stand, before any future Travis County jury or grand jury – would be suspect at best. Dunn's integrity is forever damaged, Acevedo said: "[He] completely disregarded the cornerstone of our profession."

That sentiment was supported by the two prosecutors, who took the stand to explain that they'd had problems with Dunn's integrity even before he was fired. He'd failed to document some evidence, one said, while the other said that it appeared he'd leaned on a rape victim to make an identification in a photo lineup after she said she didn't believe a picture of her attacker had been included in the spread. Moreover, Assistant District Attorney Amy Casner said Dunn didn't appear to believe that the woman had been raped at all and that he improperly turned over to the victim's family bloody evidence that had not yet been tested by the defense in the case.

Dunn's own testimony turned emotional on the stand. He didn't have any biased "intent" in writing the e-mail in question, he said, or at any other point during the internal inquiry. (Indeed, it seemed that no one involved in the investigation gave any thought at all about Dunn's e-mail – the investigation's lead detective, Shawn Harkin, didn't even remember reading it, a sentiment shared by Dunn's supervisor, Sgt. Pat Connor.) While explaining his position to the independent arbitrator hearing the case, Dunn teared up, saying that he might not be the very best cop but that he is a hardworking cop and that he really wants to be a cop again. "I'm a good cop; I'm not the best cop, but I'm a good cop. I want to be a cop, and I'm being told I'm a piece of shit," he said. "I did not commit any type of bias in this case."

A decision from the arbitrator is expected early this summer. 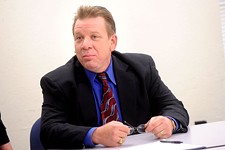