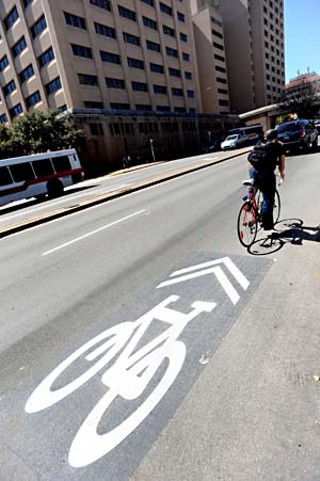 Retreating from earlier plans to turn Nueces into a bike boulevard, city officials have opted instead to install bike lanes and "sharrows," like this campus-area marking on Dean Keeton. (Photo by John Anderson)

In the battle over the Downtown Bicycle Boulevard, it's pretty clear that the business interests won. So why won't they just declare victory and be done with it?

Opponents showed up in force at last week's Urban Transportation Commission and continued to blast the boulevard proposal, watered down as it is, as a looming disaster for businesses along Nueces and Rio Grande. And Austinites for Down­town Mobility, on its website www.keepaustinmoving.org, complains that the "number of affected roads has doubled. One of our major concerns has always been the negative impact on the area if you divert traffic from one street to another. So in 'compromise' the city has decided to make traffic worse on two streets." (Repeated calls to Nueces business owner Susan Harris, a leader of the group, have not been returned.)

It's hard to figure out how that charge can be true, since the city has effectively decided to not do anything to Nueces. As noted in previous reports (see "Bump in the Road for Bike Boulevard," April 9), initial thoughts of doing serious traffic calming on Nueces, the original target of the bike boulevard idea, were replaced with mere bike lanes on the northern and southernmost stretches, and "sharrows" (lanes marked with symbols reminding motorists to share the road) between Seventh and 13th. It's true that the lanes will be "enhanced," perhaps raised or marked with bright colors, but it's hard to see how they'll restrict traffic in any way. (Also, in fairness to staff, a major water main project on Nueces scheduled for 2011 nixes any traffic-calming projects for quite a while anyway.)

But sharrows? As Hill Abell, owner of Bicycle Sport Shop – and a supporter of the compromise – reminded the Urban Transportation Commission, sharrows are nothing. "A sharrow does not give me the right to take a lane if I'm on a bicycle," Abell said. "I have the right to take that lane whether there is a sharrow on the road or not. ... Sharrow or not, I can take the lane. I'm a vehicle, by the laws of Texas. And it would behoove the opponents of bicycling, or bicycle boulevards, to learn the laws of Texas as far as bicycles are concerned." (Austinites for Downtown Mobility, for the record, has repeatedly emphasized that it is only opposed to the bike boulevard, not bicycle commuting.)

Bike boulevard opponents also brought accusations of dirty play into the mix. ADM's Monica Thomason pleaded with bicyclists present to have a talk with their less rational compatriots about vandalism occurring at businesses on the corridor, particularly those with ADM yard signs. "Please tell these people to stop," she said. "It started as simple sign vandalism. ... It has now escalated to actual destruction of property. They're spray-painting our property; they're breaking fences; they're sneaking onto the property in the evening.

"We thought ... we could have an adult discussion, and that has not been the case."

Abell fired back that the broader cycling community should not be tarred by the actions of a few idiots. Vandalism accusations are "a hard thing to prove," Abell said, "and I'm offended that I, being a bicyclist, should be broadly swept into that group that would vandalize."

Indeed, "evidence" of the vandalism posted on ADM's website is inconclusive, at best. A video shows a cyclist riding up in the night and stomping on a business' "Keep Austin Moving" sign, but photos of other damage – including graffiti that simply says "love" – don't show a clear connection to the debate.

And Urban Transportation Commission Chair Richard MacKinnon reminded ADM that dirty tricks go both ways and complained of a "disinformation campaign" by boulevard opponents. "We do condemn the vandalism of property," MacKinnon said. However, he said all commission members had received many e-mails with "bad information in it. And the bad information was almost duplicated from one letter to the next, talking about a bike boulevard that completely eliminated vehicle traffic. That doesn't do any side any good, because people start to debate things that don't exist. ... What it started to feel to me like was the 'death panels' of bike boulevards."

The UTC took no vote, as members wanted to wait for the results of an economic impact study due May 11.