The tires are gone, but the controversy still molders

The city began clearing the abandoned tires in February. (Photo by John Anderson)

Did the city pay twice to have thousands of scrap tires hauled away and "disposed of"? That, says city of Austin Fleet Officer Gerry Calk, is a question he can't currently answer. How it came to be that thousands of tires removed from city vehicles and scrapped ended up abandoned on the Southeast Austin property leased by Victor Almaguer, operator of Vic's Tire Service – and whether the city has overpaid to have those tires removed – remains the subject of an ongoing internal investigation.

To recap: In December 2009, the Chronicle first reported that a mound of city-owned scrap tires had been accumulating on Almaguer's property since at least 2003 (see "The Tire Mound of Mystery," Dec. 4, 2009). Almaguer had previously held a contract to fix flats for the city's fleet, although he was not contracted to transport or dispose of those tires – he was not registered to do so with the Texas Commission on Environmental Quality, as required by law. Nonetheless, Almaguer said the city's tire program manager, Bill Janou­sek, had him haul thousands of tires and store them at the property he leases off Highway 183. Under state environmental rules, the city is required to document in a five-part manifest the removal and final disposal of all its scrap tires; however, the available manifests reflected that the city had not properly tracked its disposal of scrap tires since at least 2006. The tires were finally hauled from Almaguer's property in February, after fleet officials contracted with a new, licensed national vendor, Pittsburgh-based Liberty Tire Recycling, with regional offices in Baytown. The company was paid $50,000 to haul away and properly dispose of the moldering mounds of tires. On Thursday, April 8, council approved an additional $29,000 to continue funding the contract with Liberty through the end of August; the city will negotiate a full contract for transportation and disposal of scrap rubber before that contract expires.

The question remains whether the city had previously paid for the removal of the scrap tires left in Southeast Austin. Before bringing in Liberty to clean up its mess, the city's Fleet Services Division had contracted with Tire Centers Inc., which was paid to haul and legally dispose of the tires. In response to an open records request, the city provided the Chronicle with a series of manifests purportedly created by TCI that the city said reflected the disposal of city tires. According to TCI, however, the city's tires were not separately recorded on individual manifests; in other words, the TCI manifests do not specifically track the disposal of city tires, but instead include them among a large number of miscellaneous scrapped tires TCI had collected. As such, Calk said last week, the city can't say for certain whether TCI or anybody had already been paid for the disposal of the tires abandoned at Almaguer's.

"We do not know whether the tires that wound up there" were paid for, Calk said. That question is still under investigation. (City spokesman Reyne Telles said the city is "not denying" there was an "issue with paperwork," but said he wouldn't go so far as to say the city's scrap-tire record-keeping was "bad." He said the new process, with help from Liberty, which uses an electronic manifesting program, has been approved by TCEQ.) Still, Calk said, "we had to assume" that tires picked up by TCI "were disposed of properly."

That's a questionable assumption at best, as Fleet Services had previously reviewed its own work and concluded that the city was properly tracking and paying for tire disposal. According to an August 2009 memo written to Calk by several division officials (Deputy Fleet Officer Jennifer Walls, Fleet Operations Manager Irvin Schmidt, and Acting Deputy Fleet Officer Urcha Dunbar Crespo), a review of the city's manifests had "revealed that the process" for accounting for the scrap tires "is being followed." The officials specifically noted that "comparing collective manifests to collective invoices revealed no significant discrepancies in the number of scrapped tires and the number of scrapped tire disposal fees paid by the city." However, if that conclusion is correct, it would seem the city has now paid twice for the disposal of the same set of scrapped tires. Nonetheless, last week Calk said the question of whether the city paid TCI for tires that were left at Almaguer's – and have since been removed by Liberty – remains an open question.

When he first learned about the pile of tires abandoned at Almaguer's, Calk said that he wasn't aware of them until the Chron­icle brought it to the city's attention just before Thanksgiving. When pressed, however, Calk said that someone inside Fleet had brought to his attention as early as August 2009 an "unspecified allegation" that "tires were being diverted from the scrap stream." But he said that at the time he wasn't presented with any evidence that was happening. Calk initially said he had passed the allegation on to "people investigating" other issues with the city's tire management program; a few days later, "upon further reflection," Calk informed us he had in fact not reported the allegation to staff. Now, of course, he says he realizes there was evidence – the rows and stacks of tires at Almaguer's. Does it bother him that no one at the city found the problem? "Yes, obviously," he said.

The internal investigation into problems with the scrap tire program is ongoing, said spokesman Telles, and Janousek, the tire program manager, remains on paid administrative leave pending the results of that inquiry. 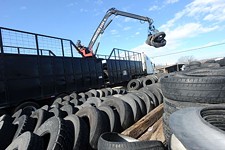 Tires on the Move: What About Fleet Services?
Questions pile up as the pile of tires comes down