Pick your poison: but two darlings of the holy roller set got beat, and the voice of moderation – or what passes for moderation in the GOP – spoke out loud and clear.

In the race for State Board of Education District 10 – with northern Travis, Williamson, and Bastrop among its 16 counties – former public school teacher Marsha Farney of Georgetown trounced Austin Republican activist Brian Russell with 62% of the 37,824 votes cast. Farney beat Russell solidly in every county except Burleson, where she edged him out by only two votes. And vying for Place 3 on the Texas Supreme Court, District Judge Debra Lehrmann of Colley­ville beat former Dripping Springs state Rep. Rick Green with 52% of 333,385 votes.

The SBOE competitors were seeking to replace Cynthia Dunbar, stepping down after a lone, controversial term. Dunbar drew widespread attention as a vocal (and anti-public education) member of the SBOE's seven-member fundamentalist bloc, a group that has caused the label "national embarrassment" to be affixed to the 15-member board.

Farney did a balancing act, campaigning as the "common sense conservative," wooing Republicans while realizing that fundamentalist fervor has been turning off many voters. She also billed herself as "the voice of an educator" who worked in and had children attend public schools. Russell, on the other hand, proudly trumpeted his activist credentials and the endorsement of Dunbar, and his own children are homeschooled. On Facebook, Russell wrote of his defeat, "Despite our opponent's lies and extraordinary spending, 40% of the voters still believed in our conservative message, which being the Truth, is ultimately the winning message. God bless."

Green is infamous for his brief, hard-right tenure in the Lege, which ended in 2002 when he lost to Patrick Rose by only 335 votes (a race immortalized in Paul Stekler's brilliant political documentary Last Man Stand­ing: Politics Texas Style). He made Texas Monthly's 10 worst legislators list and in recent years has been a spokesman for WallBuilders, a prominent, Aledo-based religious-right organization headed by evangelizing historian (and GOP official) David Barton. That was as close as Green came to qualifying to sit on the state's highest court, and voters apparently saw that. In November, Lehrmann will face Democrat Jim Sharp.

The defeats of Green and Russell can't simply be chalked up to disgust with hard-right Bible-thumpers – Farney and Lehrmann had serious money. Lehrmann managed to rake in big contributions from law firms that were doubtless concerned about an unqualified ideologue assuming the bench – she took in about a third of a million dollars. Given that Green could only fight back with about $75,000, his 48% vote total doesn't look too bad. 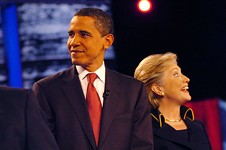 Debate Night: All the News Next Door
It's campaign season in Austin!