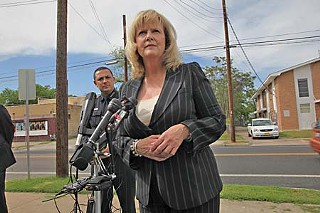 Dallas City Manager Mary Suhm talked to the press last week, outside the offices of the Austin NAACP, about her city's search for a new police chief. Austin Police Chief Art Acevedo (l) is one of six finalists for the job. (Photo by Jana Birchum)

Hospitality workers' union Unite Here is demanding the firm that runs most of the concessions at Austin-Bergstrom International Air­port reinstate workers it claims were fired for trying to discuss their working conditions with their employers. In late March, 30 staffers approached the local offices of New York-based management firm Delaware North over health and safety concerns as well as recent changes to their employment policies: Workers say the company makes it tougher to take sick leave but easier to be fired. One of the employees, Mike Minnick, said, "Basically, we asked for a meeting with HR, and they would not meet with us." Minnick and three other employees have since been fired – nominally for insubordination, Minnick said, "but pretty obviously to intimidate the rest of the group." The union will file formal complaints on the employees' behalf. "We want to be reinstated with our seniority," Minnick said, "and we want them to address our concerns and not just turn us away." A request for comment by Delaware North had not been returned by press time. – Richard Whittaker

Tense moments on the dais last week, as City Council confronted – yet again – diversity issues at the Austin Fire Department. At issue was an item allocating up to $780,000 to North Carolina contractors Bernard Hodes Group for minority recruitment services at AFD. Chief Rhoda Mae Kerr and Mayor Lee Leffingwell sparred over the cost of the program. Taking issue with Kerr's characterization of the cost – she acknowledged $280,000 for the first 18 months without mentioning four potential one-year extensions at $125,000 each – he asked whether the item allows for spending up to $780,000. When Kerr began to explain the potential extensions themselves, he said: "Well, that's extra information. I asked you if it authorized up to $780,000, and the answer is yes." Later, Leffingwell asked why AFD couldn't "build on" the police department's minority recruitment efforts, "instead of trying to reinvent the wheel?" Council ultimately approved a scaled-back version of the contract proposed by Randi Shade that only allocated the initial 18-month payment of $280,000: $130,000 for the recruitment plan and $150,000 for advertising and marketing. Joining Shade were Sheryl Cole, Chris Riley, and Bill Spelman. Asked by Spelman why third-party expertise was needed, Kerr said, "We have tried for 10 years without any significant results." – Wells Dunbar

What Would Gay Jesus Do?

An offer to save a student play hounded out of Stephenville by religious bigotry was rescinded less than a day after it was made. On April 7, Fort Worth's Rose Marine Theater offered to host a performance of several short plays by Tarleton State drama students. In a press release, the theatre offered to provide the students with a "safe place to continue their artistic and academic study." The production at issue, a one-act workshop version of Terrence McNally's Corpus Christi – a 1998 allegory about a gay Christ-like figure in West Texas – was originally scheduled as part of a night of student performances on March 27 at Tarleton State (see "Why Not Just Throw a Tomato?"). However, after a condemnatory press release from Lt. Gov. David Dewhurst and a series of threats against the performers, the university first relocated and then cancelled the production over safety concerns. Rose Marine then made its offer to host, only to withdraw it again on April 8. Explaining this latest cancellation, Rose Marine Executive Director Adam Adolfo confirmed to the Dallas Voice that at least one threat had been made against his theatre. – R.W.