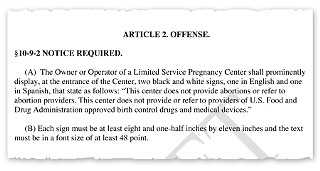 Austin could become the second city in the nation to require "crisis pregnancy centers" to post a consumer alert, as proposed in this ordinance.

On the Austin City Council's agenda for its April 8 meeting is a proposed ordinance that would require so-called "crisis pregnancy centers" to post a sign to notify cleints that they do not provide or make referrals for either abortion or contraceptive services.

If the ordinance is enacted, Austin would become the second city in the nation to provide the consumer alert for clients visiting CPCs – unlicensed centers that provide pregnancy tests and pregnancy "counseling" but do not offer any medical services. "We are simply requiring limited service pregnancy centers to disclose what is factual and true about the services they offer," Council Mem­ber Bill Spelman, who's sponsoring the ordinance, said in a press release.

The city of Baltimore passed a similar ordinance late last year; on March 29, the archdiocese of Baltimore filed a federal suit against the city, arguing that the ordinance violates the free speech and religion rights of the city's CPCs. "Not only does the Ordinance single out pro-life centers for its requirements under threat of criminal penalties, the Ordinance regulates communications at the Center that are personal, moral, religious, and political," reads the lawsuit.

To be clear, the Baltimore ordinance – like that proposed by Spelman (and co-sponsored by Laura Morrison and Mike Martinez) – defines the centers as "limited-service pregnancy centers" and requires only that those facilities that do not provide the range of reproductive health services post a notice to that effect. Indeed, like the proposed Austin ordinance, the Baltimore law does not require any CPC to actually provide or make referrals for either of those services.

The Austin ordinance would likely apply to a handful of CPCs in the city, and its authors say it isn't meant to hurt their businesses – rather, it is meant as a "truth-in-advertising" law, to protect women as consumers. "Regard­less of how one feels about birth control or safe, legal abortion, this ordinance is about providing accurate information," said Martinez.

Cecile Richards (r), president of the Planned Parenthood Federation of America, joins in the March 25 dedication of a fountain in the courtyard of the Robbie and Tom Ausley Clinic and Education Center in South Austin. The fountain was named for Richards' mother, the late Gov. Ann Richards, a lifelong advocate of Planned Parenthood. (Photo by Jana Birchum)

The city of Austin has a high rate of sexually transmitted diseases among young people (according to the local Planned Parent­hood, the rate of STDs here in 2009 earned Austin the dubious distinction of ranking in the top 40 out of more than 800 PP facilities nationwide), and statewide, the number of teen pregnancies has earned Texas the No. 4 spot in the nation – and the top spot for the teen birthrate, according to the latest trend report released by the Guttmach­er Institute in January. Given the grim statistics, it simply makes sense to ensure that women, especially when confronting an unplanned pregnancy, have all the factual information and resources they might need. "This ordinance is targeting some of our most vulnerable consumers," said Sarah Wheat, vice president of community affairs for Planned Parenthood of the Texas Capital Region. "They deserve as much information as they can get to make informed decisions." Knowing what you're getting, and what you aren't, when you go to a CPC is a good thing, she said – "information is good."

It seems likely that the proposal will spark some angry feedback – CPC supporters, most of them staunch foes of abortion, have long been loud, both in the city (as at the Central Health board of directors meeting last year during a debate over whether to approve funding to provide abortion care to low-income and uninsured women through the county's Medical Assistance Program) and at the state Capitol (witness the perennial marathon hearings before the House State Affairs Committee whenever the topic of abortion arises). While locally those voices have not been successful, over at the Capitol it is an entirely different story.

Indeed, in 2005, lawmakers took $5 million that would otherwise go to providers of traditional family-planning services for low-income women to create the new Alternatives to Abortion program as a way to directly fund CPCs and task them with "promoting childbirth." In a series of articles, the Chronicle found that the money hasn't exactly done much to provide women with any real services – aside from referring them to other state and federal programs and providing a nice annual raise for Vincent Friedewald, the executive director of the Texas Pregnancy Care Net­work, which administers the state contract. Yet in the 2009 session – a bad budget year – lawmakers allocated an additional $3 million over the biennium for the program, boosting the Alternatives to Abortion budget by a whopping 60%.

Still, in spending that money, the state-funded CPCs are not required to be licensed or state regulated, nor are they required to provide any medical services. The city of Austin's proposed ordinance is only seeking to make clear what services a woman is getting when visiting a CPC: "Women facing an unintended pregnancy need to understand what services are available to them," Morri­son said in a press release. "This ordinance helps ensure that."