Tweet
print
write a letter
On Monday, March 29, Editor Jo Clifton announced that her online city politics newsletter, In Fact Daily, had been sold to the Austin American-Statesman for an undisclosed sum. Clifton announced the sale on InFactDaily.com, adding, "I will continue to report and edit all the news important to your understanding of the workings of Austin city government." The newsletter, founded first as a four-page weekly fax publication in 1995 by Ken Martin, eventually became a daily online journal; Clifton has been its editor and publisher for nearly 10 years.

In a brief interview with us, Clifton said that the Statesman will manage the business side of the publication – working to expand readership, build subscriptions, and handle freelance reporter payments – while she continues to direct editorial operations, independently of Statesman editorial operations as well as its website, Statesman.com. "There will be no 'rebranding,'" she said. "We will still be In Fact Daily." In her announcement, she quoted Statesman Publisher Michael Vivio: "We are very pleased to welcome In Fact Daily to our family of products."

Clifton's spouse is recently retired Austin Energy General Manager Roger Duncan, so there's been some local speculation that the two might consider moving from Austin or that he might take an energy-related job elsewhere (e.g., D.C.). "I don't want to retire; it sounds boring to me," said Clifton, adding that she and Duncan love Austin, all their friends are here, and they don't want to live anywhere else. She said Duncan has done some gardening and even discovered baking – "He's baked me three pies since he retired." To mark his retirement, they've scheduled a "Tahiti vacation" in July – and she says the Statesman deal will mean fewer temporary website shutdowns when she's out of town.

Clifton insisted that IFD will retain its editorial independence while the Statesman builds the business. "Like all of us, they're learning how to work in this new online environment, and trying how to do niche publishing and online pay sites. They like our product, and it works. 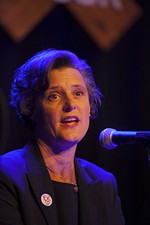 Brown and Eckhardt Make Some Distinctions
What's the difference between the Dem Travis County Judge candidates? It all comes down to personality.