One Dem Run-Off: Sage vs. Montford

A hard-fought race heads to the finish line

Nearly a year after she began campaigning, Karen Sage is still knocking on doors across town telling Austinites why she's the best choice to be the next judge of Travis County's 299th Criminal District Court. "I'm pounding pavement, [and I'm] on the phones," she said last week, "just working it."

From a four-candidate field in the March 2 primary, Sage and fellow Dem Mindy Mont­ford advanced to the April 13 run-off, trying to take over the bench being vacated by retiring Judge Charlie Baird. Montford garnered 45% of the vote, while Sage won 37%.

Sage, originally from Minnesota with stints in New York and California, is a former federal prosecutor and has been an assistant district attorney since coming to Austin in 2006. Montford has lived in Austin for more than 30 years and *also worked as an assistant D.A. before taking on a private criminal defense practice. Each has solid credentials, and they offer voters similar but distinct ideas for the future of the 299th bench – known for jurists who embrace innovation.

Sage believes she's best positioned to provide the kind of leadership the busy court needs, and she has run with a distinct purpose in mind: "a vision for the bench." Her passion is to "change the way we do justice – not just trying cases, but looking for innovative ways of doing justice." She's been campaigning since last summer, although originally for the 147th bench being vacated by Judge Wilford Flowers (which will now go to Austin police monitor Cliff Brown). When Baird announced his retirement from the 299th, Sage switched her sights to that race. 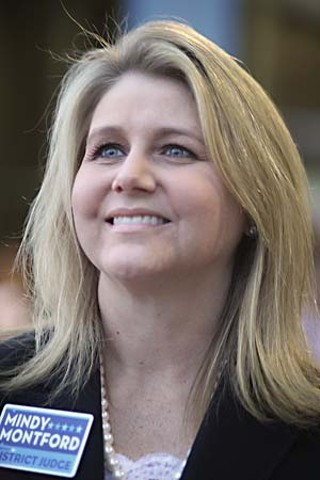 Sage (www.karensageforjudge.com) says her professional experience, especially as a federal prosecutor in New York, has prepared her for the bench. She's handled complex white-collar cases and human trafficking cases. Trafficking cases would land in federal court here too, but the district bench does see some white-collar cases, and with the recent creation of an environmental crimes unit within the D.A.'s office, she says her experience in business crime cases, as well as her mastery of the rules of evidence, will serve her well. Her experiences in federal court, she believes, "very much translate directly into state court."

Overall, Sage says she's been running long and hard because she really wants to make a difference in Travis County: "I've got the time and effort and energy to do what is necessary for this bench." She believes that sets her apart from her opponent, who only started campaigning in December, after Baird's announcement and on the last day of filing. "I didn't get into the race at the last minute because I thought I could win," Sage says. "I got into the race because I think I can make a difference in the lives of individuals as well as keep the community safe." She's garnered the majority of endorsements among local Democratic clubs, and her base of support includes former state Rep. Ann Kitchen and a number of grassroots community leaders.

Montford says Sage's judgment of her motivation – only to win and not to serve – is preposterous. She's been in the community for more than three decades and has been working in criminal justice here for 14 years. Although she didn't announce her campaign (www.montfordforjudge.com) until Baird announced his retirement, she says she'd already been pondering a run for a district bench – possibly for Judge Bob Perkins'* seat, or holding off for the 167th bench of Judge Mike Lynch, who's expected to retire at the end of his current term. At Baird's surprise announcement, she felt compelled to run for the bench in front of which she's practiced for years. "It's not just something that I dreamed up overnight," she said. Montford ran for D.A. in 2008, losing a run-off to Rose­mary Lehmberg. Running for a judge seat, she said, "is just another way to continue to serve" the public.

Montford has broad support among city politicos – including state Sen. Kirk Watson – and has picked up a handful of influential backers since election night, including Mayor Lee Leffingwell, County Attorney David Escamilla, County Judge Sam Biscoe, and former opponent and longtime defense attorney Leonard Martinez. (The fourth candidate, Eve Schatelowitz Alcantar, has endorsed Sage.) Montford says that what sets her apart most is the depth and breadth of her experience in the county's criminal justice system. "I have a sense of what the community really values," she says – an understanding developed from years of working in front of and talking to jurors, lawyers, victims, and defendants. It is experience she believes the relative newcomer Sage lacks, and combined with her experience trying (and defending) the entire variety of cases that a district court hears, it would help her do a better job on the bench.

Sage has plenty of experience, she says, but of the sort that doesn't as readily translate to the state district court. "We don't deal with human trafficking or securities," says Montford. "It's very rare that we try white-collar crimes." But even when that comes up, Montford says, her stint in the D.A.'s public integrity unit – participating in cases that included the investigation of former Congressman Tom DeLay – has prepared her well.

Both candidates are working the phones and the neighborhoods in preparation for the April 13 run-off (early voting runs April 5-9). With only a single Democratic race at stake, the successful candidate will be the one who can turn out the most voters. Both say they're up for that challenge. "The way to get people to the polls," says Sage, "is to make people care about this race."